Why VR arcades could be virtual reality’s salvation

Share All sharing options for: Why VR arcades could be virtual reality’s salvation

Arcades could be what helps save virtual reality from becoming a mainstream flop for the fourth time in 60 years, experts say.

While different forms of VR arcades have been around since the late ‘90s, it hasn’t been until recently that new virtual reality gaming centers have been gaining massive popularity around the world, first in China, then in other parts of Asia and soon widespread in Europe and North America.

Earlier this week, the senior vice president of HTC’s virtual reality efforts announced initiatives meant to make it easier for people to open these arcades as small businesses. He also told Polygon that the company is considering opening two more arcade test facilities of its own. The company opened Viveland, a VR arcade in Taipei, last week. He said the company is likely to open Vivelands in Europe and the U.S. as well.

"I think one day we will see these everywhere." 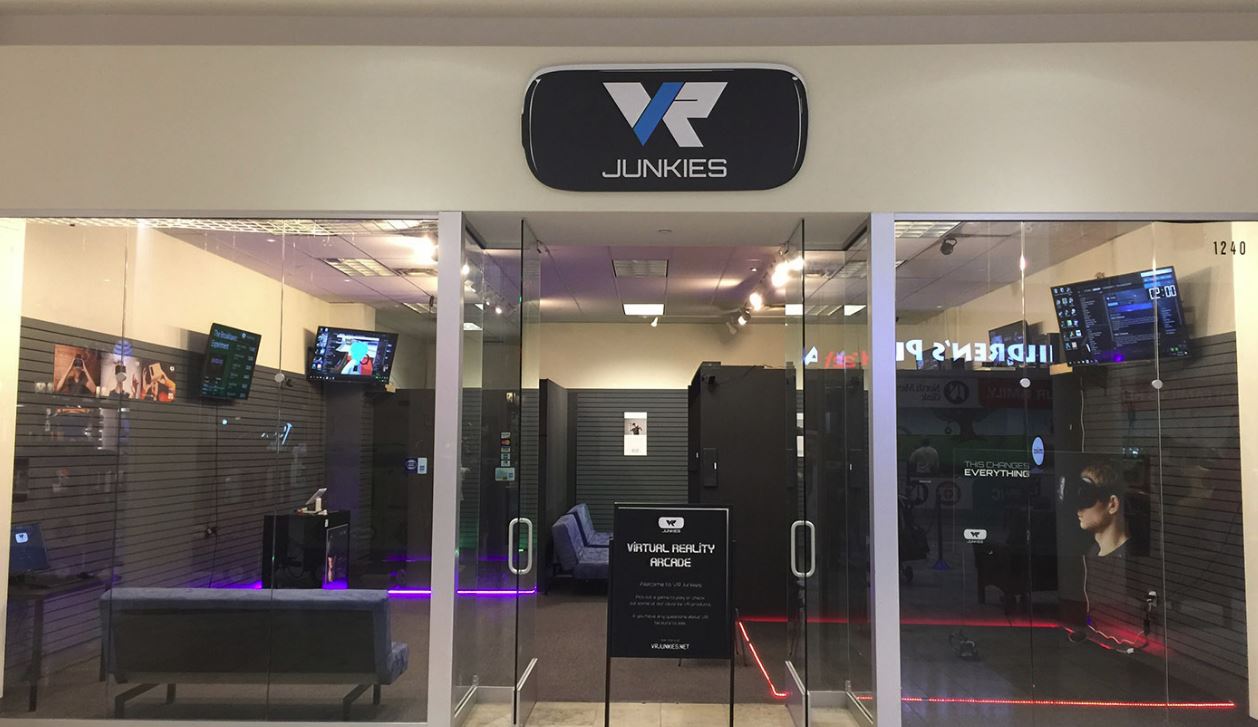 "I think one day we will see these everywhere."

Steiber said that there are thousands of locations in China alone and "massive interest" around the world.

Vive is getting into the VR arcade business mostly to help invigorate the sales of VR headsets and games that run on them. The theory is that by exposing more people to the technology, sales will go up for the hardware, which will mean a much bigger audience for the game developers. Developers can also license their games through the Viveport system, streamlining the process of getting paid for play time on commercial VR setups, rather than just for a single purchase.

Save a kitten, destroy a city

While the commercial success of virtual reality in the home has ebbed and flowed over the decades, the technology has had a much more stable existence at entertainment complexes, said Kevin Williams, director of digital out-of-home entertainment consultancy KWP and founder of the Digital Out-of-Home Entertainment Network Association.

"VR has never really gone away from the out-of-home entertainment and commercial simulation sector," he said. "Most notably Walt Disney saw incredible success with their VR platform incorporated into their DisneyQuest indoor theme park project. Opened in 1997, the facility operated continuously for over 19 years, the famous Aladdin's Magic Carpet VR Ride proving one of the longest running VR attractions, and underpinning the opportunity of VR in the attractions and amusement approach."

With the recent rise of relatively affordable consumer VR headsets and gear, the idea of delivering VR experiences in an arcade-like setting has taken hold once more. But this time, there has been quite a bit of success. That initial enthusiasm seemed to be centered mostly in China.

That’s because, Williams said, other forms of immersive entertainment like 4D theaters and motion simulators are more established there.

"VR has found a home with Chinese players as the majority of the market do not have the capability to support home based VR and already are happy to play their PC games in LAN Game centers sometimes called PC Bang sites," he said. "Amusement venues and location-based entertainment sites have also grown in popularity in the Asian Dragon market -- so it was logical that VR Arcades would be embryonic within this incubator."

As they’ve grown in popularity, the facilities generally called VR arcades have split into three distinct sorts of entertainment, he said.

"The first are facilities that offer places for players to use the latest consumer VR systems in dedicated facilities," Williams said. "The second element are specialist franchise sites, in China sometimes called VR Parks, running the latest VR game systems based on dedicated hardware. And finally in this category there are VR Arena-Scale facilities, which offer VR lasertag style experiences."

The sites tend to charge customers in two different ways: Either they charge for a set period of time or they charge an entry fee. Recently, some of the parks in China have gotten so popular, they can do both.

While the facilities started out as centers to run existing VR games you can play at home, they’ve quickly expanded to become places with dedicated experiences built for arcades. Companies like Capcom and Bandai Namco have been investing in game design for these centers lately. Capcom runs a pop-up VR experience that has players strap Vive controller to their feet and then slip on the headset and hold two more controllers. Once inside the game, the player uses their hands and feet to wreak havoc on a city as a massive monster, stomping, batting their arms and belching lighting with the controllers. Bandai Namco has an experience that places players in an elevator jetting to the roof of a high rise. Once there, players have to walk across a real world wooden plank to try and save a virtual kitten depicted as mewling for help hundreds of floors above the ground.

Some centers combine virtual reality headsets or 3D glasses and screens with specially designed guns and place the user in massive moving equipment to heighten the experience. Simuline, for instance, creates VR rides that have players sitting in what look like movie theater seats mounted inside a hydraulic-powered platform. The movement and VR is also augmented with strobe lights and wind effects.

Going down the rabbit hole

Vive’s Steiber said an increase in demand is one of the reasons the company is working to expand its content management and distribution system, called Viveport Arcade. The system creates a simple way for VR arcade operators in China and Taiwan to purchase licensing for the games they allow their customers to use. It also greatly reduces the work game developers have to handle when trying to get fees from operators.

Essentially, an arcade operator buys time for the game, like one might for a cell phone, and then charges whatever markup they like to their customers. The original fee goes back to the developer, with Viveport taking a cut. Outside of China, Viveport is focusing on the non-game industries, and Valve, which helped to create the HTC Vive headset and software, is taking charge of game licensing. 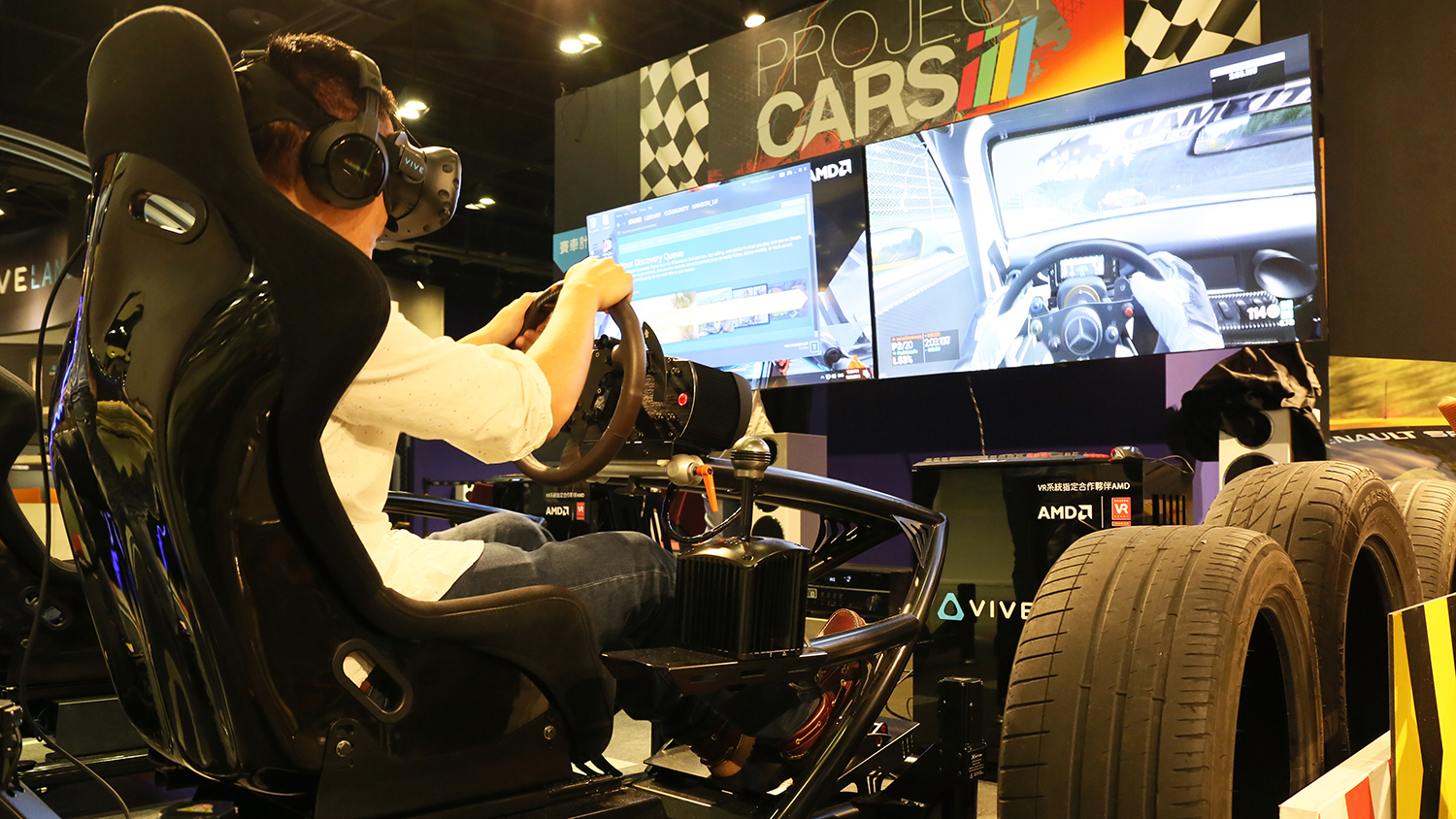 Project Cars being played at Viveland

"The challenge for arcade operators is that they don’t have great content," Steiber said. "You and I could take a couple of DVDs and start a cinema but that’s not a long-term, sustainable business. There is really no one providing them with a steady flow of content to run an arcade. They would have to contact the developer themselves and convince them that they’re going to get paid.

"It just doesn’t scale. You can’t reach out to ever developer around the world."

And developers, he added, don’t have the time to field calls from every potential VR arcade operator in the world.

So Viveport and Valve serving as the go-between seems to solve both problems.

While the companies stand to make a fair amount of money as both a storefront and arcade operator, that’s not the main reason Vive is getting involved in the VR arcade business.

"We opened the the VR arcade as a showcase to show people what a VR arcade could be," he said. "Our hope is to inspire others." 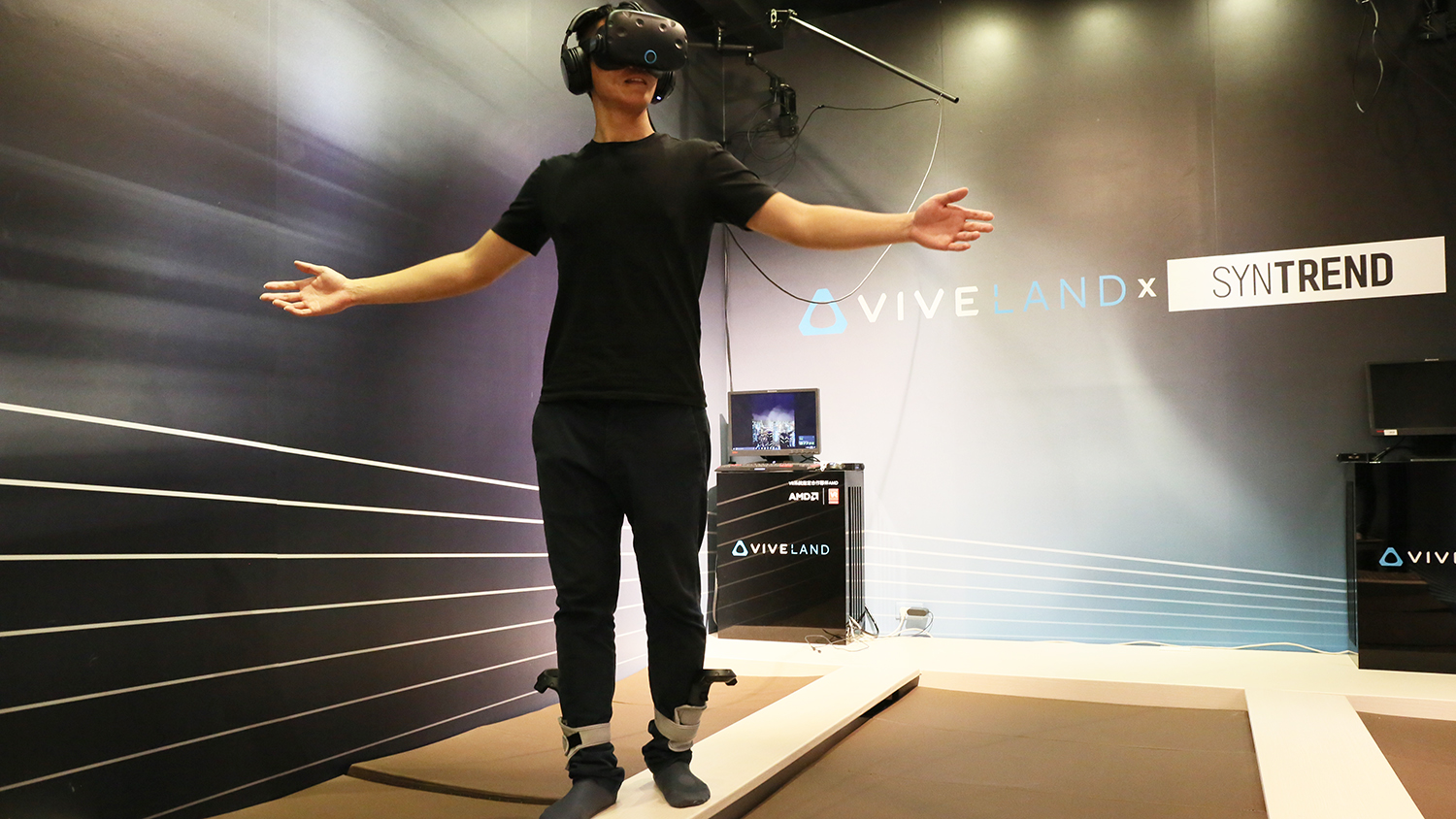 "Our hope is to inspire others."

And those arcades will mean more and more people are exposed to VR experiences.

"What I think is super exciting about this is that for the first time ever we will democratize high-end VR," he said. "The problem with VR is that you can’t explain it. It’s like how you can’t explain The Matrix. You have to take the pill and go down the rabbit hole."

While VR demo stations have been slowly popping up in places like Best Buy and the Microsoft store in the U.S., Steiber says the broader access to the technology has a good chance of changing the demographic for VR.

"It’s hard to access right now. We’re starting to get some into Microsoft Stores and game stores, but very, very soon our moms are going to be able to, for a few dollars, have their first VR experience," he said. "That will accelerate the growth of VR in general, so it’s not just the hardcore gamers but for everyone."

The rise of VR arcades hasn’t been lost on game developers, nor on some of the companies making peripherals for virtual reality.

VirZoom, which created an exercises bike that works with VR headsets, has already started to ship its devices to VR arcades, said Spencer Honeyman, director of business development for the company.

"We have gotten immense interest from VR arcade locations looking to access the active VR market," he said.

The VirZoom bikes and software started arriving in VR arcades in the U.S. China and Europe this month. He said the device will allow users to play as cars in a race, tanks in a battle or a Pegasus in flight. In all of the cases, movement is powered by pedaling.

Honeman said he thinks VR arcades will be huge for the industry.

"In regions where many consumers have VR headsets and VR ready PCs or PS4s, VR arcades are a great exposure to high-end VR experiences that aren’t usually found in the home," he said. "We also see a high demand for a competitive eSports use case where VR arcades are an efficient location to compete.

"In other regions where space or financial limitations make VR in the home unlikely for the mass market, VR arcades are a great way to play VR and enjoy all of the effort of developers to create surreal and motivating VR experiences."

Among the many new people looking into virtual reality as a way to either supplement or build a business, is Norm Laviolette, founder of Asylum Gaming and eSports in New England.

Inside the trippy Ghostbusters hyperreality experience

The notion of the perfect virtual reality, one indistinguishable from our when and where, has long been tinged with the fear that we’ve already discovered it.

The history of VR and its greatest innovators

I am in a Gitmo interrogation room, panting like a dog, squatting in a torturous position, muscles screaming. I am floating through a shadow world, transparent trees rooted in the shifting space around me, glowworms of light slipping past my view.

"We are working on building greater Boston's and New England's first dedicated eSports arena," he said. "An important component of this project will be a dedicated VR space to showcase the latest in VR technology."

The arena, which Leviolette is hoping to open at an undisclosed location in mid 2017, will be used to stage eSports competitions as well as play host to conferences, social events and gamer nights, he said.

VR, he added, will be an important component of what he hopes to do with the center.

"Ultimately, we are creating an experience for people, and really there are few things out there that can elicit such an amazing physical, emotional, psychological reaction like VR," he said. "We plan to have a dedicated wing just for VR, and keep it flexible to evolve as VR evolves and becomes more and more sophisticated.

"Our new arena will be a playground for technology based entertainment. We really are only at the beginning of where VR, and AR, technology is going. The crossover, or what I think is more accurate, blurring of the traditional lines of entertainment and VR/gaming/esports/sports is incredibly exciting. We intend to be as open-minded and forward thinking as possible, embracing new technology and ideas of what entertainment is now in the 21st century."