No Man’s Sky isn’t the game I expected: thoughts on the first 10 hours

Between its surprise announcement back in 2013 to impressive E3 showings to appearances on popular mainstream talk shows, it doesn’t feel like a stretch to call No Man’s Sky one of the most anticipated games of this generation, if not ever. When I sit down with a game I know I’m going to review, I do everything in my power to remove myself from that hype — both my personal expectations and those raised by the increasingly loud fervor from an eager audience.

With a game as buzzed about as No Man’s Sky, though, it’s really hard to fully rid oneself of any assumptions about what awaits. In the spirit of honesty, I’d rather just be forthright about what it is I thought No Man’s Sky would be and how that compares to what it actually is, based on my first 10 hours or so with the game.

To be clear, this is not my final review. That will be coming later this week or next, depending on how long my journey to the center of the galaxy takes. Instead, consider this my first impressions and my initial attempts to work through the confusing mix of emotions storming inside me as I play No Man’s Sky.

The Big No Man's Sky FAQ

(Also, a small technical note: As you may have heard, No Man’s Sky has a rather massive "day zero" patch that is now available. While I procured an early copy of the game and played a few hours pre-patch, these impressions are 100 percent based on my feelings with the post-patch version of the game.)

The biggest shift in expectations I’ve had to get used to in No Man’s Sky is simply regarding what genre it slots into. In the initial heady trailers and demos that I saw, my mind went wild imagining the joy of simply exploring a universe — wandering around, flying from planet to planet without a care and so on. I didn’t follow interviews with Hello Games closely, because I didn’t want to spoil much, but this was the tone the game seemed to be giving off in the little I did see.

In actuality, No Man’s Sky is first and foremost a survival game. From the confusing outset, where you’re thrown onto a planet with a crashed ship and told only to gather the resources needed to repair the ship, it’s all about hunting down various minerals and isotopes needed to live.

No Man’s Sky is first and foremost a survival game 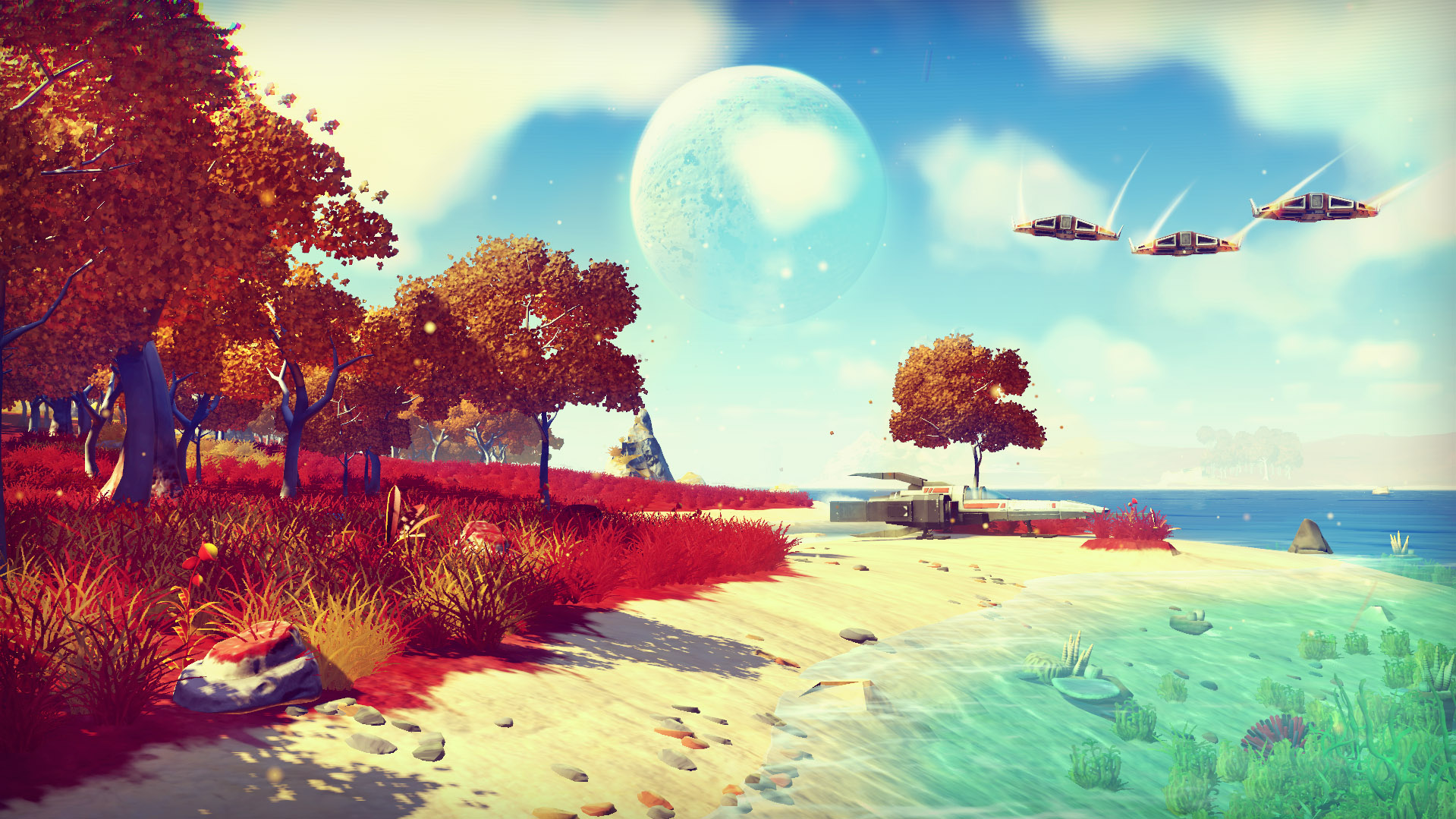 Even beyond fixing the ship so you can leave the planet, you’ll need to keep up a steady supply of zinc and titanium to keep your exosuit's hazard protection operating, and carbon or plutonium isotopes to feed into your life support power pack. And that’s only the beginning; you’ll need elements like heridium, iron, emeril and a half dozen others to build new technologies and upgrades as you progress.

The survival element is especially pronounced in No Man’s Sky’s death penalty. Like in Dark Souls, you drop your items and a small grave marker when you die. You respawn at the last checkpoint you visited, and you need to run back to that grave marker to collect your carefully gathered loot.

What is No Man's Sky like before the day-one patch?

To be clear: The game, thus far, isn’t actually very difficult. I’ve only died once, so I’m not even sure if the items disappear if you die a second time before getting back to them. But the many ticking timers that make it a survival game — the draining life support, the hazard protection on planets with harsh environments, the wear on your mining tool and so on — add just enough tension to be, well, kind of annoying.

In these early hours, I am enjoying the parts of No Man’s Sky that are purely exploration. Studying weird alien lifeforms and scanning them in to a growing database, for example, really helps get across a sense of believable biology on planets, even as I’m aware that they’re all procedurally generated.

The problem, then, is that those parts are so constantly interrupted or put on hold for the sake of a survival loop that just isn’t very fun. Shit, I’m almost out of carbon, which means I need to wander over to some local plant life and slowly cut it down with my mining tool. Damn, I’m ready to leave this planet but my thrusters are low on power; time to wander mindlessly until I happen across some plutonium.

The mundanity of this cycle is exacerbated by an insultingly tiny inventory space that requires near-constant juggling and micromanaging. Was it plutonium or platinum that I needed? Can I actually keep all of these tradeable trinkets I’ve found until I stumble across an NPC willing to trade with me, or can I just not spare the space? These are the types of strategic questions I found myself asking as I played No Man’s Sky, and frankly they just don’t make for a terribly engaging experience so far.

This all sounds terribly harsh, I’m sure, but for what it’s worth, these problems seem to be fading the further into No Man’s Sky that I get. I’ve come across a few enhancements to my exosuit, granting more inventory slots, as well as bigger multi-tools that allow me to craft more mining and shooting upgrades. If I save up enough credits, I could even purchase a new spaceship that can store much more. It’s just a matter of collecting these quality-of-life improvements over tens of hours, which could understandably be enough to turn some players off of the whole experience.

Let me tell you one spot where No Man’s Sky unequivocally succeeds, however: It is a complete technical marvel, to a degree that I cannot even begin to comprehend how it works. The rush of blasting off from a planet, zooming into space, aiming to another planet, rushing into its atmosphere and landing — all with no visible loading — is unmatched by anything I’ve ever experienced in another game. That’s not hyperbole; the sense of scale is just amazing.

the sense of scale is just amazing

I’ve only explored a handful of planets so far, but they’ve all been interesting too — varied and fun to explore even without the hand-crafted feel that I usually prefer in level design. One planet had a constant toxic rain and no alien life but was full of monoliths that taught me words in alien languages. Another was a lush jungle world with dozens of new creatures to document and a huge bonus payment when I was able to track them all down.

Which I guess just brings me back to my initial point: I would love the opportunity to just explore these places, jump between them at will, explore the galaxy and see what awaits me without the constant pressure to collect a bunch of crafting materials just to survive.

Maybe that’s just not the vision Hello Games had in spite of my initial expectations. And maybe after a few more hours, I’ll start getting their vision more and come to appreciate it. We’ll see how it shapes up in full, but for now I’m just working on coming to terms with a game that is almost entirely different from what I thought it would be.