Animal Crossing New Leaf, the recent Nintendo 3DS release for the series, packs even more stuff into an already dizzyingly long list of features which have collected over each iteration on the title. The game introduces the bulk of these slowly, over days and weeks, to prevent you from drowning in all of it; the rest is left up to the player to uncover.

For a lot of people, this seems to be their first Animal Crossing in the series, or at least their first since the original GameCube edition made its way to shelves roughly a decade ago. As such, I thought I'd put together a couple posts to help ease everyone into their new role as mayor.

When you first start out, you'll be asked some basic things - your name, your gender, the town you're traveling to, as well as what your plans are when you get there. There are two things to note during this exchange. First, the three questions you are asked regarding your plans once you arrive at your destination are what determine your facial features. If you're aiming for a specific look, the Face Guide at the New Leaf Wikispaces page is a great resource.

Second, and much more important, you'll be presented with a map of the town you're moving to, which ought to look something like this: 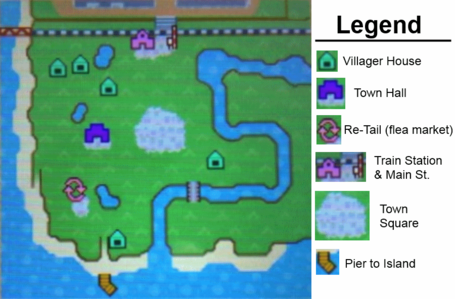 If you don't like the layout, say so! Rover will present you with another randomly-generated town map to assess. When picking a town, keep the following in mind:

When you start out the first thing you should do after the introductory dialog is head north to the Main St. shopping district. In the beginning you'll find: a photo booth - used to take pictures for your Town Pass Card, a form of identification needed to do any online activity; Nook's Homes - the place to go for home renovations and remodeling; the post office - which also contains the only ATM available on the mainland; Nookling Junction - The store which sells everything from furniture to fortune cookies; Able Sisters boutique - The clothing and accessory store run by Mabel, Sable, and Labelle; and finally, The Museum - The same as you'd expect from the previous titles, though missing a few features.

Head for Nookling Junction where Tommy and Timmy will cycle between shovels, fishing rods, and bug-catching nets. Pick up either the fishing rod or bug-catching net, whichever is available (or whichever you prefer if both are in stock). If you're lucky enough to have a shovel as the second tool being sold, put together the 500 bells you'd need and grab it so you can begin collecting fossils right away.

Important note: While you *can* sell items to the two Nook children, it's in your best interest to sell at Re-Tail. Why, you ask? Reese at Re-Tail will actually give you 20% more for your stuff than the Nookling Junction kids would.

Afterwards, head to the Town Hall and ask Isabelle for help learning the ropes as mayor. When she asks you whether you'd rather learn about fishing or bug-catching, choose the one you don't have a tool for. Immediately talk to her again after she tells you to stop by Nookling Junction, and tell her you couldn't find the tool for sale. Isabelle will then give you the tool for free!

Continue going through the dialog with Isabelle to receive a free watering can, which is a tool you can't actually get until a new store is unlocked (which, quizzically enough, requires you to water a bunch of plants to unlock...)

Once you've got the shovel, fishing rod, bug-catching net, and watering can you're all set to begin raking in bells to put towards your home loan. You're going to want to focus on getting to the second level house as quickly as possible, as this triggers Tortimer (the mayor from previous games) to come visit you for the day. When he visits, he will unlock the ability to travel to the Island!

While it requires a 1,000 bell payment be made for the boat ticket, you can easily make hundreds of thousands of bells per hour if you know what you're doing, thanks to the Island's special properties. I encourage you to explore this on your own, but if you really wanna know, check out the Tips & Tricks post coming soon!

A Mile In My Shoes

This final section of the chapter will show you the morning routine of Mayor Ikaruwa of Potos Village. This whole list takes about 45 minutes to complete, and hopefully will give you an idea of the stuff you'd want to do to ensure you experience a little bit of everything the game has to offer.

Phew! Well, that's a lot to take in for a first post, so we'll stop here. The next post will be all you need to know to get the most out of interacting with the various NPC's in the game.

Please let me know if you have any questions, or comments to add to the post!