So despite being a veteran of the franchise, I'm ashamed to admit that I only got Battlefield 3 on PC a couple of weeks ago; and obviously - despite being killed more than ever, I'm still loving it!

Now since I got it a year after release [I picked up the Premium version] a lot of players have already hit the high ranks and built up a lot of skill, so it's taken a bit of a learning curve to play with the big dogs! Still, where many would rage quit and throw out the controller, I've persevered and managed to find my niche once again. 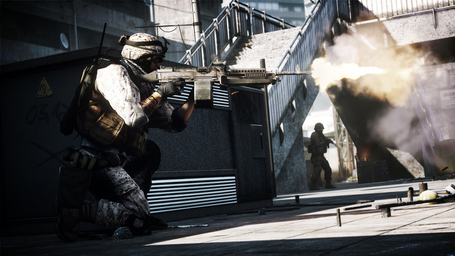 For me, it's all about the support class this time around; and like it's version in Bad Company 2, I've found the M249 to be my machine gun of choice. Sticking on the extended mags and the foregrip, the ironsights remain open and perfect; so you can acquire and eliminate targets at range, but you also have that massive rate of fire for close range encounters. The support class also lets you pick up hundreds of points by resupply, so its easy to get some quick points.

Sure, support is about supporting team mates, but I still like running around like a madman. Perhaps that explains my awful K/D ratio!

But that's just me, how do YOU like to play Battlefield 3, and what do like or dislike about how other people play?

Sound off in the comments below soldier!