I'm talking strictly personal moments, not the "I beat a certain boss kind". Considering the many passive choices available in Dark Souls, there is no denying how unique the experience can be between players. With the added invasion system, no two playthroughs are the same.

I want to hear about your character. What makes him or her great. What weapon you used and what the moment was. What made that moment so great for the time.

For me, my Character is Celest and my moment was protecting my brother. 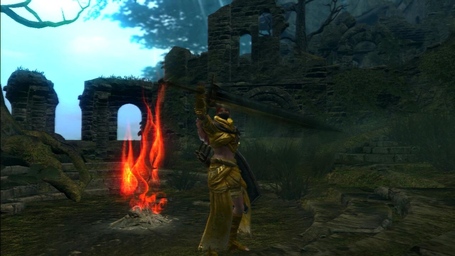 To give some background, my brother is not the the kind to play RPGs or heavily intricate games. About a year back he decided to visit me and play some games with me. One day he saw Dark Souls on sale and knew how much I love the game and decided we should play together. Now, every Saturday he will visit with his PS3 so that we can play Dark Souls together. He is hooked and does not want to play Demon's Souls, which he recently has gotten, and simply wants to expand his character despite the fact that we have "beaten" the story aspect once.

The moment: My brother and I had been playing for a bit and have not seen any invaders yet. My character is a Pyromancer and at the time I had boosted the pyromancy flame flame to its first degree maximum level (second degree being its ascended form). It was the depth I believe when we encountered our first invader. He wasn't a cheater but he clearly was a veteran. At the time I had the great combustion, which is my preferred choice of pyro for PVP. We dueled for a bit while my brother tried to avoid his attacks with the best of his abilities. Finally, it came down to the player ignoring me and pursuing my brother (as my combustion was too much for him to handle). He aimed straight for my brother, but he managed to roll away. Meanwhile, I was building up my great fireball to the point where I lobbed it at the invader as he swung and missed.

Her weapon at the time was the default pyromancer Ax. Armor set was the pyromancy set and shield was (maybe) the crest shield.

My brother from then on enjoys taking down invaders. He uses God's Wrath in small rooms while I proceed to use Chaos Storm which ultimately engulf whatever room we are in.

I love my character. She is the best at what she does and she is a memento of all the great times my brother and I had with this game.