So, I finally got around to playing Demon's Souls, and decided to keep a progress post of sorts so I won't overburden Polygon Daily with this. :)

First and foremost, a bit of context: I have all three souls games and, for various reasons, hadn't started any of them. After a bit of a back and forth between which game to start, DsS was The Chosen One and off I went.

Started the game with Royalty, since a friend suggested that for a first time player the Soul Arrow would be helpful. So far, so good: decided to go in blind and don't read a lot about strategy or stats or equipment, even though (as I usually do with RPGs) I'll probably end up checking a few builds to keep in mind when leveling up (suggestion are welcome!).

However, being online and talking with a lot of people that love the game, I knew that at the very least I'd need to keep my shield up, and that's what I've been doing.

So far I'm loving the game, I'm Soul Level 1 still on 1-1. Died twice, the first one because I didn't watch my stamina (duh), the second one right before the boss because I was stupid and got bouldered over (Double-DUH). It was late so I stopped there and will resume today. Other than exploring, I feel I *REALLY* need to get the parrying time right. It's been a pain. :\

So, overall? Loving it, and kinda miffed I don't have much time to play ;)

After mucking around 1-1 and starting a bit of 1-2 for the past couple of play sessions I went ahead and, after upping my STR so I can use the winged spear, tackled 2-1.

Died a few times, but always managed to get my souls back and got a Crushing Battle Axe +1, a pickaxe and a Crescent Axe and a whole lot of stones. 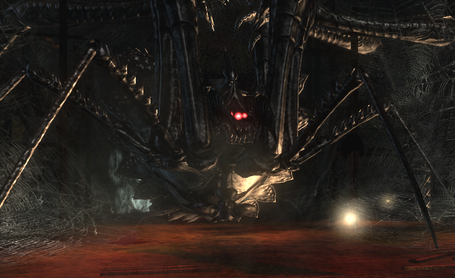 ... and I must admit that after trying to get close a few times and dying I cheesed out and sniped her with Soul Arrow over and over again :p

Back in the Nexus and my next steps will be levelling up a bit more. I'm SL16 with a truckload of VIT and 13 STR. I need 18 STR for the Composite Short Bow I have and I'll probably need to up my DEX to use it - I'm considering aiming for that to get the Red Dragon in 1-2, but I might move along to 3-1 first, not sure.

Too bad I don't have much time to play and, since there are no checkpoints, I know I need to slot an hour or two to clear a level, at least.