Did Jensen kill someone before this picture? It depends on the player.

Jensen was something of a blank slate for you to make your mark on your surroundings, but not everyone left the same marks in their time with Adam Jensen. How did Jensen behave in your copy of the game? Was there a trail of bloody corpses and bullet-holes, left by a trench coat wearing "hanzer"? Or were there just a lot of people in an infirmary being treated for broken jaws, noses and ribs?

Perhaps it was a mixture. Jensen's story is one of love and loss and some players may have chosen to reflect that in their actions, perhaps neutralizing minor enemies and remorselessly shooting those who stood in their path to the truth. All three of my suggested approaches can make sense depending on how you characterize Jensen. Perhaps he has hardened into a relentless killer due to grief. Maybe he doesn't want anyone to be losing someone close to them, and has taken the role of a punchy pacifist. Or maybe he's pacifistic to a point where someone's brains look better splattered on the wall behind them.

During my time spent playing the game I've tried to be a pacifist the entire way. The less deaths on my Jensen's hands, the better. I don't want to be responsible for deaths and suffering like those shown during the opening mission of the game. Sure, I'm augmented and superior to my peers in the game but that doesn't mean shooting them's the way forward. My Jensen is a kinda decent guy.

Right up until the first boss fight of the game against Barrett. That dude got what was coming to him, courtesy of some explosives and a modified pistol featuring a suppressor and specialized rounds. Now I'm back to playing a fairly moral role in a rather immoral world. 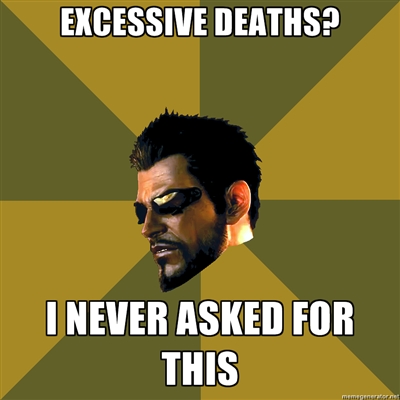 What about your take on Adam Jensen? What did you make him do?