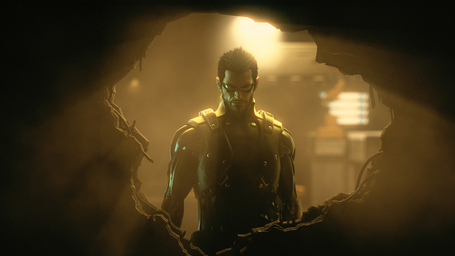 So let me just start by saying that Deus Ex: Human Revolution is a great game. The mix of stealth and action is pitch perfect and rewarding and the story draws you through with a few really excellent twists. Yes, the boss battles suck and feel wildly inconsistent. Yes, the voice acting is sometimes awful (consider many of the side quest characters), though it is also sometimes great (consider David Sarif).

My first playthrough was a mix of stealth (when I could get away with it) and action (when I couldn't bother to), and was both challenging and satisfying. It left me wanting more. As such, I initially went through the achievements list and cleared out a few of the achievements. After this, I decided I'd do a full stealth playthrough with no casualties. Let me say this clearly: Deus Ex is NOT meant to be played this way. At least, not all of Deus Ex is meant to be played this way.

For example, while playing through the Detroit side mission Cloak & Daggers I found myself in a situation where I had to take out six enemies within an area of about 30 feet. It became a trial and error of stun gun shots and takedowns until I finally succeeded. Add in the fact that my stun gun was inexplicably killing an occasional enemy for a guaranteed recipe for frustration.

Now I know I spent the last paragraph critiquing this game for how difficult it was to play stealthy. Here's where I flip it a bit; It's often too easy as well. Once you have smashed your way through the front door once, you discover all the stealthy ways that you could have gone. The first time through the police station, I crawled through the level after entering on the second floor. After realizing how useful the social augmentation was on the first playthrough, it was one of the first augmentations I got round two. As such, I was able to talk my way into the police station and walk past all the guards that once troubled me. It's almost like playing a different game -- one where you've found the easy button.

I realize that playing through a game once in it's entirety is not often done, let alone a second time. I also realize that some will find "breaking" a game rewarding in it's own way. These are great critiques, and I'm not oblivious to them. I contend that Deus Ex is one of the best games I've played in years, despite it's flaws. I just don't think it's a great experience the second time through.