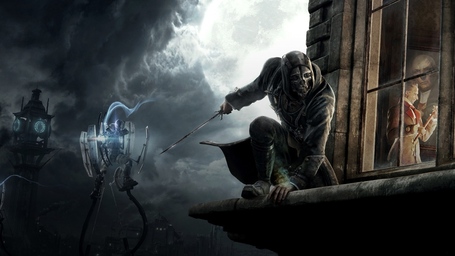 Dishonored takes place in a fictional city of Dunwall in an untold time line. The artistic vision of the city resemblance the Victorian era which paved the way to the Industrial Revolution coupled with modern science. Creating a fascinating world with high tech equipment and machines run by iron, fueled by oil...in this case, whale oil.

You are Corvo, a body guard and close friend to the Empress and her child. However, things go really bad one day as some group of assassins manages to outfight you and murders the Empress, to make things even worse the group who orchestrated the assassination pins you with the murder. It is up to you to somehow escape their clutches and not only clear your name, but also redeem the death of a friend.

Despite being a First Person Shooter, Dishonored stays away from the pitfalls the genre brings while exchanging those with some RPG elements creating a hybrid in the process. Most FPS are all about being in a simple linear level level for you to just shoot to Kill > open door to a new room and repeat. However, Dishonored does things differently. The level design in Dishonored is very open most the time, the game gives you the tools which you can combine to not only find alternate routes, but also alternate ways to approach a situation. For example you can always shoot your way to an enemy compound, or, you can take the soul of a fish and swim your way to the compound without arousing any suspicion. The tools may be basic, however what makes them so powerful is how they stack up with each other and create special combos. These combos are not given to you, but it is upto you to explore these powers and discover your own combos. It is very satisfying as a player when are able to accomplish tasks using creativity instead of gunpowder. If creativity is not your thing, you can always go with all guns and powers blazing, but often this approach makes the game a lot harder. In this game, a steady mind often has better chance of coming out alive.

The beauty of the world cannot be understated, the Victorian touch gives away that familiar feeling, while at the same time, the sci-fi topping deviates from that timeline making you feel your in a strange world. Ambient sound equally plays a very important role in the game, from the metal plates colliding with each other to the constant propaganda of the Overseer, reminding you of the current state of the world, which is often reflected by your prior deeds.

The problem with Dishonored is that it spends way too much time on the Assassination missions instead of telling the player why he/she should care. The game does not give insights on the target's life and the effects they have on the city and more importantly, the people.

Early on the game you will come across a dead couple, holding each other before they died with the plague. This simple scene tells more about the city's downfall than an hour worth of dialog ever could; sadly that was it and frankly it irritated me a lot. The folks at Arkane Studios created this blueprint of this amazing world, but they were reluctant to build on that by exploring the stories of the individuals who actually lived there. If they have told these untold stories, the assassinations would have had more meaning to them and dare I say, would have felt more personal.

Even if your someone like me who takes his time to explore every inch of the game world as much possible and gets distracted and eventually sidetracked in every imaginable way...Dishonored is still quite a short game. It took me about 6 hours to complete the game. Make no mistake as those 6 hours were hardly wasted, but still you can't help feeling this world was begging to be filled with content.

New IP usually is a very risky propostion for publishers, especially with seasoned core franchises like Bethesda. It was very refreshing for them to endorse this new project, for their risk, they got rewarded. Dishonored is a fantastic start to a new franchise, hopefully Bethesda sees success (money) in it as much as I do so that they willing to pour even more capital for a sequel perhaps somewhere down the line.