The other day, I decided to download all of my Humble Bundles that I had. I remember that Hotline Miami was a hot game for some time, so I decided to give it a try. Without a doubt, after hearing the intro music, I was hooked. The gameplay took me awhile to grasp since I am a console gamer and have never really played any games on PC/Mac (I was playing on my Mac Mini). I have a few observations about the game and how it builds confidence. 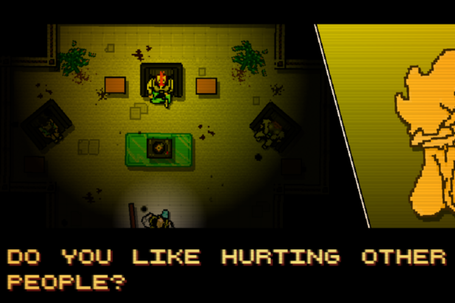 These first scenes really got to me. Not only are you being asked questions you have no recollection of, but you do not really know how to respond. To be honest, it was very intimating when first playing the game. I'm not used to playing games with a keyboard and I felt timid each time I entered a room. 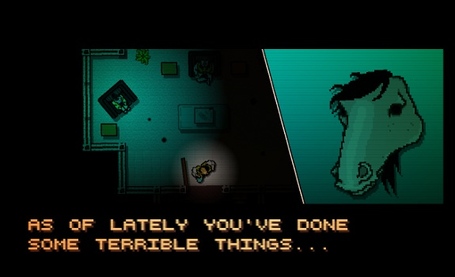 The more I played, the more addicting the gameplay got. Instead of feeling timid, I accepted this recklessness and was on a killing spree. Sure, my "grades" were not that great, but I got an urge to kill in different ways. Look, a baseball bat. Yeah, I'll kill him with that after the door hits him. Look, a dog. I'm sorry puppy, but you are no longer of value. Look, a man with a shotgun... I better plan this attack. In a way, I was still timid, but I accepted a lot of what I needed to do. I kill or be killed, and quick. Without thinking, I pulled off some of the levels with ease, but these terrible things I am doing are nothing compared to the end result.

When I was getting to the final levels, something clicked. I remember rushing through levels and pulling off kills I never would have done before. I was playing with confidence. This game leads you to believe the unbelievable: How will I get through this many guys without dying? My thoughts were no longer thinking too hard on planning the kill because my confidence was through the roof. I entered each room on reaction and just killed it. I went person to person, dog to dog, door to door and was successful much more quickly than before. I knew I wouldn't miss a shot. I knew where each punch would land. I knew when certain people will turn around. This confidence is what made this game extra special to me.

Am I excited to see a sequel? Yes, I am. I'm even considering going back and playing some levels over again with different masks. I believe this game makes you a more confident gamer overall. What we have here is not just a game, but a mental rehabilitation of your gaming habits.