Back in 2010, Medal of Honor released to the public, attempting to portray real-life military operations in Afghanistan in the Shahakot Mountains. The product failed to live up to expectations, pushing the team to go back to the drawing board. Medal of Honor: Warfighter is the next installment in the franchise and it’s once again inspired by real-world events about global terrorism. Danger Close, the developer behind the game, aims to soar high in Warfighter by featuring Tier 1 units from around the world, but many of the same mistakes that dragged down the original game are back for a second appearance.

Medal of Honor: Warfighter's campaign has serious pacing issues, while it tells an utterly ridiculous story that fails to accurately portray military operations. Warfigher’s multiplayer is the only saving grace, but a broken user interface, lack of map variety and competitive balance issues breaks it’s chances of it standing out.

The story in the Medal of Honor: Warfighter campaign centers around a soldier torn between his duty for his country and his responsibilities as a father and a husband. The life of a soldier has left Preacher, the protagonist you will be playing, sad and distraught from being far away from his family. Most of the story is told from awkward cinematic sequences that try to tug on your heartstrings, but are so abysmal that you end up not caring. They feel tacked on, and feel entirely separate from gameplay, which is where the campaign has conflicting messages that they try to present. Sure, we might care about Preacher if the gameplay didn’t result in us getting a hundred headshots to progress through a level. You end up not caring about Preacher and the rest of what is waiting for you in the campaign.

Instead of honoring those who are currently serving in the military, Warfighter ends up just being another Call of Duty clone that is vastly underwhelming. The story in Warfighter will span five to six hours that will frequently repeat themselves. It does everything by the book and never tries to do anything daring or inventive. Gameplay missions are tightly scripted, giving the players little or no leeway in choosing how they move around the battlefield. Anytime you choose to find an alternate route, you’re instantly ambushed or outnumbered, forcing you to restart and follow a linear pathway.

This wouldn’t be so bad if mission objectives didn’t follow suit. In a section where Preacher is chasing a man through a village overrun with terrorists, three separate times I was forced to let my target go from my grasp, fire upon hostiles and continue chasing after him until the chase ended with a QuickTime cutscene that I had no interaction with. It’s most likely you’re going to get more of Warfighter’s campaign when you aren’t doing anything. A chase sequence involving your squad taking to the sea in motorized boats can easily be completed without firing a single bullet. 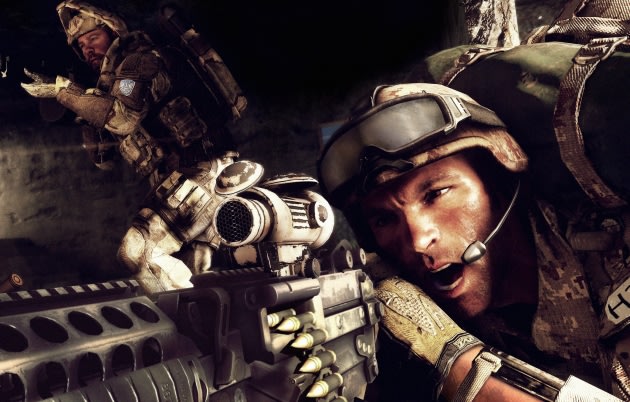 Warfighter’s online multiplayer maybe one thing you cling onto, but you have already experienced it. If you’re a Battlefield 3 veteran there is a very slight learning curb because Medal of Honor mimics it’s superior counterpart. The most notable multiplayer element is the game’s fireteam concept. When you start a match, you’re paired up with a partner at the start of the match, helping initiate cooperation between teammates. This concept never really comes together because the online community disregards this entirely. Sure, there are incentives, but they don’t impact the gameplay enough to make players stick together.

Online play is class-based, and the result is a mixed bag. There are six classes that you can choose from and each represent a Tear 1 unit from around the world (two for the United States): the Australian SRS Pointman, US Navy Seal Sniper, Canadian JTF2 Heavy Gunner, USOG Spec Ops and the SFODD Demolitions. Balance issues between classes were a main issue as the Seal Sniper is vastly underpowering compared to the other classes. The demolitions class is the go-to the class at the moment because of how much damage it can take and the lack of options available to take them down.

All of the maps are small close-quarters focused maps, and there is very little variety. Some of the maps offer thrilling moments, but over time the maps tend to blend together as many utiilze the same settings. The lack of large open world terrain and no vehicles to use at all is a little disappointing, giving the game little replay value.

First-person shooters have never been known for their storytelling, but Medal of Honor may have changed that. Warfighter’s storyline might be one of the worst (or best) things to happen to the first-person shooter genre, as it has set the bar lower then ever before. Medal of Honor is advertised as being the closest reimagining of military warfare, but is far from it. Warfighter is a cut-rate Call of Duty clone that deserves to be discharged from service as soon as possible.