So in case you dont know, a couple of Facebook posts have gone out that are allegedly from Nick Denton. Here is the first one 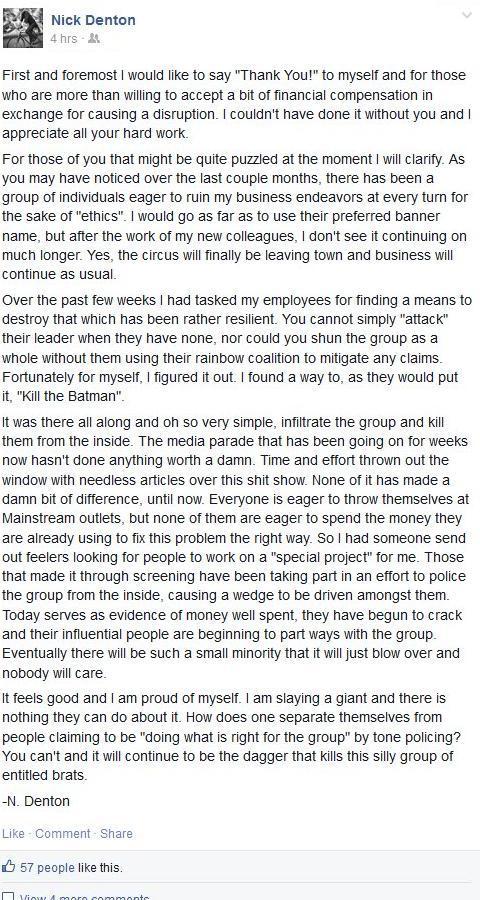 Essentially its him patting himself on the back for inserting his own paid employees to pretend to be members of Gamergate. Now, what he has them doing is pretty vague, Policing, causing a disruption and placing a wedge in the group could mean any number of things. But what is obvious from this post is he paid people to pretend to be in Gamergate, and we dont know exactly what those fake Gamergate people did, But i think at the very least he could have had these people come in and suggest sending threats to people like Wu and Anita.

The second post is him acknowledging the first post being leaked and saying he will delete his facebook page and create a new one to find out who among his friends leaked the first post. It isnt hard to find, the same person (@Kingofpol.) leaked both of the posts. Not only that, but Nick Denton's facebook page was DELETED shortly after the leak. I dont understand why he would delete a private facebook page unless this was true.

But lets put aside whether this is true or not. So my question is two fold. 1. If this is true, does someone as high up as Nick Denton putting people inside of the group in order to sabotage it change anything about your opinions on this whole situation? I mean, at the worst this could mean that Denton had his employees threatened Anita, Wu etc and then pin it on Gamergate or instigated the talks about it on websites like 8chan. It could mean that Gamergate was right all along, that they were actually about ethics and it was other parties that were doing the Misogynistic things in order to discredit Gamergate as a movement.

I mean, even in the best case scenario of him sending in trolls and then patting himself on the back for it, or having them become Mods to shut down talk about it.....its still pretty sketchy at the very least. This entire thing gives Gamergate a right to say "hey, maybe it wasnt us, maybe it was a Nick Denton situation where someone outside of Gamergate came in to ruin our name" every time something happens.

the second question is....how do you post that on your facebook? I mean, the number one arguement for this being fake will be "common, no one is that stupid".