Another E3 has come and gone and here we are, talking again about the diversity issues the gaming industry struggles with. There was progress this year. Gaming sites, including Polygon, have been right to trumpet the strong crop of female protagonists that littered trailers and gameplay videos across the eight press conferences we watched last week.

But what of the people on stage? The ones that spoke to us about their games and their work. Well. Turns out I sat on my butt all week and kept track of the demographics of the people we heard from. It also turns out I like statistics. I'd like to say up front that I don't have 100% confidence that I tracked everything with complete accuracy. There may be a mistake here or there. But I did go back and rewatch most of the conferences to confirm what I'd written down.

Seriously, I re-watched the Square-Enix press conference. It was painful. 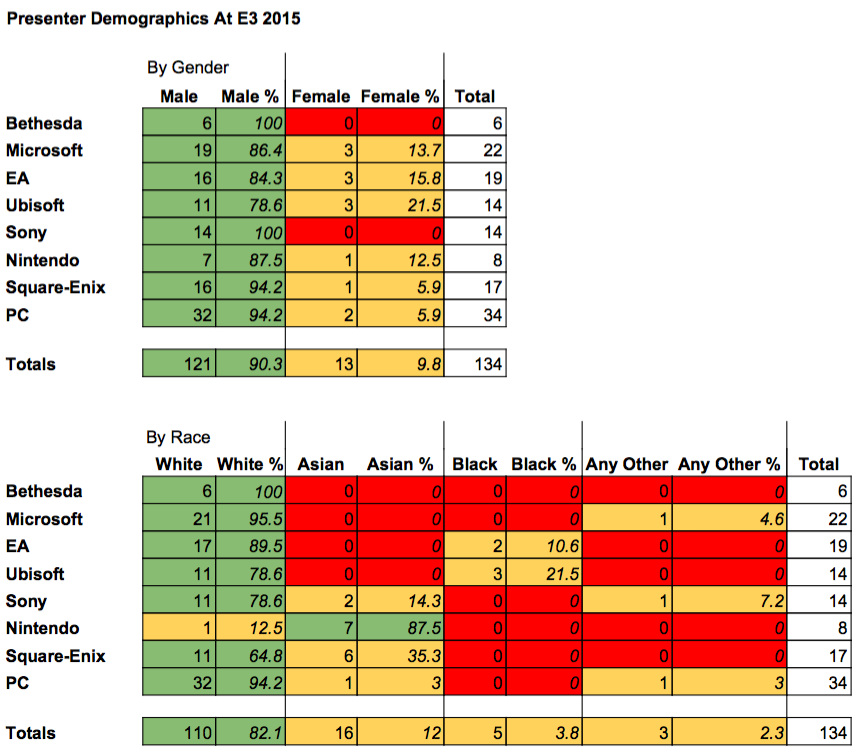 There was a moment in the Ubisoft press conference that blew up Twitter a bit. Angela Bassett came on stage and we got to watch her talk to Aisha Tyler about video games for a second. It was a great moment, and it was awesome that so many people acknowledged what we were witnessing. But the truth is that that moment was an oasis in the middle of a very dry desert.

Some things that stuck out to me:

So where are we?

We've made progress, sure, but when it comes to women and minorities seeing themselves reflected in the industry they patronize we have a long, long way to go.