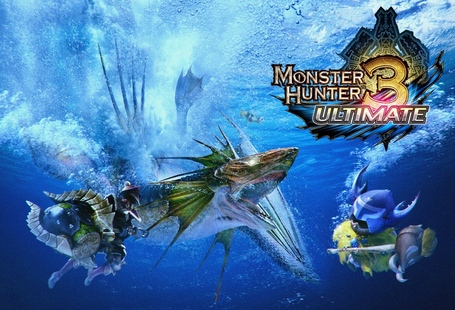 Monster Hunter 3 Ultimate comes out today in the US and very soon in Europe So I figured I’d write a few tips that can be useful to people who are picking up a Monster Hunter game for the first time. There’s a lot to cover but I’ve kept it as brief as possible.

There are 12 types of weapons in MH3U I recommend trying each and every one of them at least once so you get an idea of which one you like the feel of the best. Here’s a small summary of each weapon: 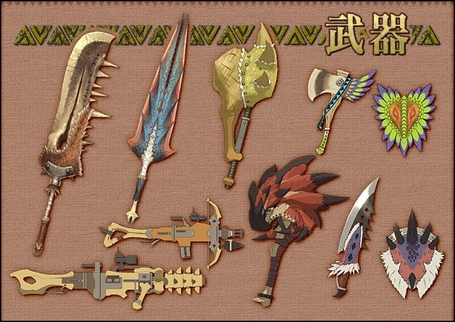 Great Swords: A large slow weapon that deals a lot of damage though. They have a charge attack that can go up 3 levels. This is a pretty devastating move. You can block with a Great Sword but doing so will cause it to lose sharpness.

Long Swords: It is quicker than Great Swords but at the expense of the ability to block. The long sword has a gauge which fills up and allows you make a spirit combo. By performing spirit combos you increase your damage dealt. You must attack often though as the gauge will go down when you don’t attack.

The Sword and Shield: Is what I generally recommend people start out with to get a feel for the game it’s pretty balance, allows you to make some of the quicker attacks in the game and to block. Damage with a single swing is usually lower with a Sword and Shield but this is because you can make several strikes. To further compensate for this later on many weapons in this class will be infused with an element like Poison or Fire to help inflict a status effect have it deal more damage. With the Sword and Shield you can also use Items while your weapon is out.

Dual Swords: Are like a more attack based Sword and Shield. You can’t block with them but you do get to go into a demonized mode in which they can perform a demon dance. Attacks won’t bounce in this mode but your stamina will drain quickly. Like the Sword and Shield they do smaller amounts of damage but are quick and they get elemental attributes.

Hammers: It is like the Great Sword is a large weapon which deals a lot of damage. The difference is that Hammers along with Hunting Horns are the only two which deal impact damage. With impact damage the places where a monster takes the most damage are changed around. Along with that you lose the ability to cut tails, however you gain the ability to make the opponent dizzy by bashing them on the head. This allows more bashing. You cannot block with hammers.

Hunting Horns: Are similar to Hammers; they are however weaker. To make them different they have a recital ability which makes you the bard of the party. You can create several effects such as attack up or defense up.

Lances: Are a long weapon which are slow to move with. They do get a large shield which allows for blocking of even bigger moves than the sword and shield. Lances are unique in that they change from impact to cutting damage depending on what zone you are hitting.

Gunlances: Are similar to lances but they have explosive shells. You get an infinite amount of shells but they still need to be reloaded. Gunlances can combo shelling and poking rather effectively.

Switch Axes: Are similar to the Long Sword and Great Sword depending on which mode they are in. While in axe mode the running speed and attack speed are similar to the Long Sword, while in sword mode it resembles the Great Sword. While in sword mode the weapon will not bounce however, the weapon has its own stamina which determines how long it can remain in that mode.

Light Bowguns: Are light ranged weapons. You can run with them while unsheathed and they unsheathe very quickly. These generally have lower attack power but also have access to use ammo called rapid fire.

Heavy Bowguns: Are basically the opposite of Light Bowguns. An attack deal large amounts of damage but you can’t run while unsheathed and unsheathing takes a while.

The bow is a neat ranged weapon which has infinite ammo. Individual shots work differently per bow. There are 3 different types: Scatter which spreads the shots out; Pierce which travels through a monster hitting multiple times; and finally Rapid which several arrows are fired and spread out vertically. The bows arrows can be coated in different substances which cause different effects like boost power cause sleep or paralysis; the bow you’re using determines what it can be coated in.

Like I said before try them out to see how each feels. I suggest starting out with a melee weapon until you get a good feel for the game. The reason behind this is so you’re not spending money on coating and ammo types at first when funds are pretty low.

For the most part for any hunt it’s best to go with a full set of items whenever you go on a hunt.

This means a full stock of potion, mega potions, tranquilizer bombs, a trap, temperature regulating fluid if you’re in the cold or in a hot region, whet stones (melee), ammo/coating (ranged), paint balls, and food.

Now the reasons you want each item.

Potions and mega potions: Both heal you. You need to stay alive. You can go down 3 times before you fail but each time you die your reward goes down so it’s best not to die at all.

Food: increases your stamina bar, this is good to eat at the start of each mission and for when your bar shortens.

Temperature fluids make it so your stamina doesn’t go down faster if you run, they’ll also prevent your stamina bar from getting shorter at a quicker rate.

Whet stones allow you to sharpen your weapon so they’re at their most efficient.

Paint balls: these help you track monsters. The bigger monsters tend to move around a lot and it’s good to know quickly where they end up when they run away.

Tranquilizer bombs and traps are used to trap your monsters. (More of this in a bit) You can only carry one of each type of trap but if you like you can carry the materials to make more on the field. Traps work well to immobilize a target and dish out some extra punishment.

When using recover Items like health potions or whet stones I recommend changing areas while facing a big baddie. Nothings worse than losing the health you just gained back because you're unable to move during the animation.

Gathering Items and combining them into something great.

Gathering in this game is pretty easy. You basically go to a gather spot and when you get a ? mark above your head you click "A"

There are 4 different types of gathering points Normal, Mining, Insect catching, and fishing.

Normal gathering can be done with several things including grassy areas, bone piles and poop.

Mining: These usually consist of rocks or rock like items; You’ll need a pickaxe to get to these.

Bug gathering: You’ll usually see a butterfly for the bug thickets. To catch any bugs you’ll need a net.

Fishing Spots: You can fish at fishing spots and you don’t need a pole but the use of bait will improve what you catch.

Try gathering lots of herbs, mushrooms, and honey whenever you can when you first begin the game these will be used throughout the entirety of the game.

Combinations: I’ll give out some of the important ones that you’ll be using throughout the game. Although you can heal with herbs it’s not ideal.

Combinations have a chance to fail in which case you end up with garbage, which is pretty much useless. Because of this I recommend combining from your box inside the village and not on the field 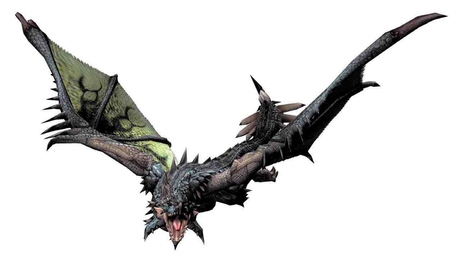 You may have noticed that attacking is very slow in this game. Many first time players think that this makes the controls feel clunky. This is actually done on purpose, so that each swing is precise and has weight to it. You need to be aware of what the monster is doing before you attack. When you first encounter a monster it’s best to get a hit in then dodge until you memorize each monster’s tells. Each monster will give some sort of sign indicating what they’re about to do and when you have these memorized you will learn from what position and when to attack better.

Learn when to sheath and when to draw your weapon. Your movement changes depending on if you have your weapon out or not. If you have it out you will (most of the time) be unable to use items or run. With some of the bigger weapons your regular movement may be hampered as well. My general rule of thumb is only keep out your weapon when you plan to strike and keep it sheathed for most other circumstances.

As I alluded to before where you hit the monster can have a great effect on how much damage you do. Usually the face and torso deal the most damage but this isn’t always the case. This really is dependent on the monster. With some monsters if you strike the legs often enough you can cause them to fall over allowing you to get some free hits on.

Sometimes you’ll want to strike very specific spots on a monster to break that part off. If you’re using a cutting weapon you can cut many monsters tail off and then proceed to carve (and get an item) for that tail. Destroying a specific part of a monster will reward you with more parts at the end of the battle.

The last thing I’ll discuss is trapping and killing your prey. Killing your prey is sometimes the only option. When you kill your prey you will get to carve it like you would any old monster. However most of the time you’ll want to capture the monster. Doing so often gives much better rewards.

Before just hopping online for the first time I recommend getting used to the controls. The best time is probably after you have defeated your first big baddie. In this case it would be the Great Jaggie. After you have beat him you should have a better Idea of how the game will play since the majority of the time it's these bigger monsters that you will be fighting.

lastly watch where you swing. You won't damage fellow hunters online but you will still hit them. This can cause them to lose their combo, fall over get knocked across the field or worst of all cause them to fail a dodge which would lead them to getting smacked around by the monster. So be considerate, friends don't swing giant swords at friends's faces.

That’s pretty much it. If I missed something or you have any questions feel free to chime in on the comments below.