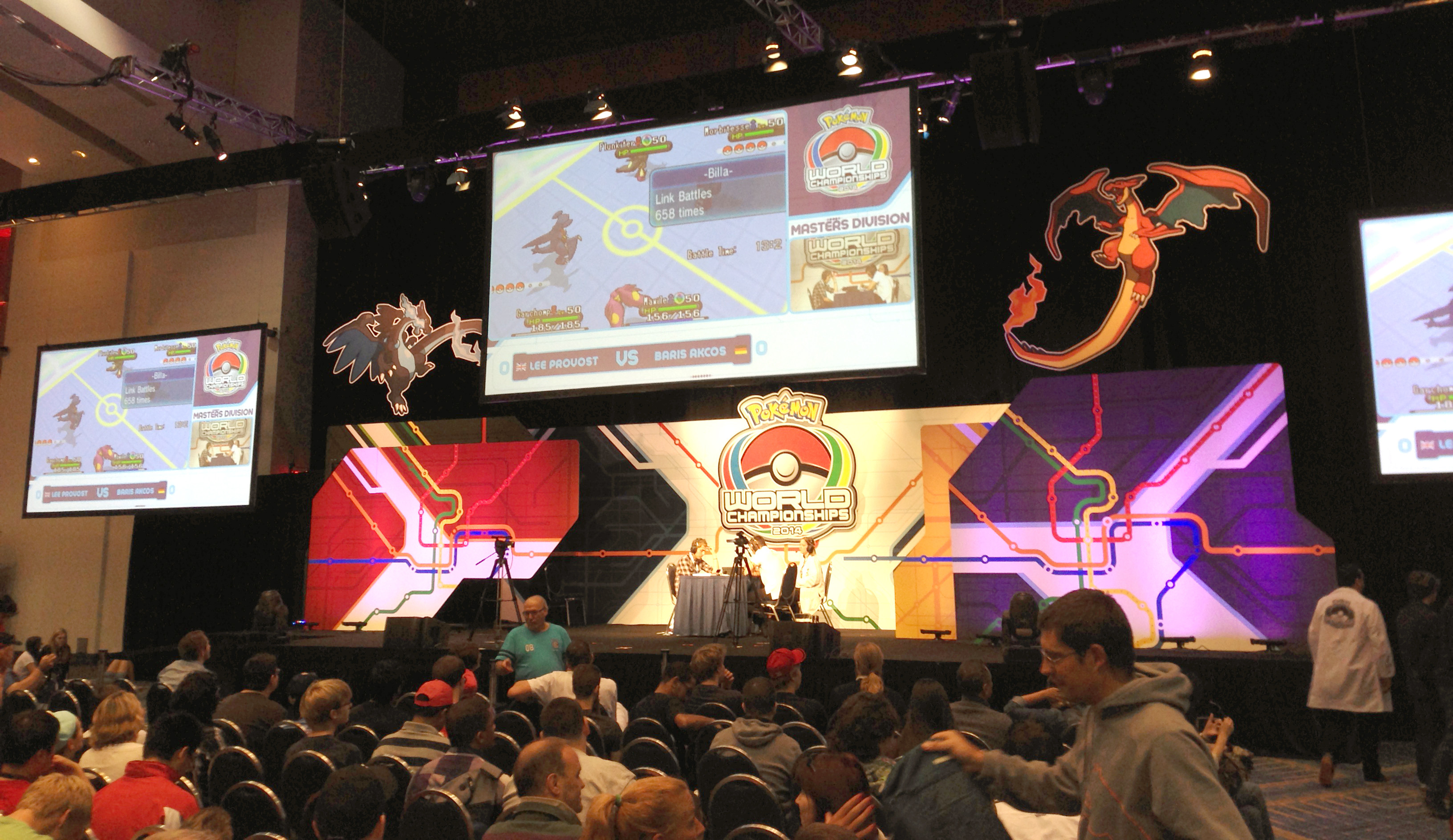 The 2014 Pokémon World Championships took place last weekend in Washington, D.C., so I decided to tag along with a bunch of friends to check out what exactly happens at one of these events.

I love Pokémon, and having grown up with the series I still enjoy playing the various entries released over the last two decades. I was never into the competitive scene, however, as I just prefer to enjoy the story and gameplay at my own pace. Competitive gaming is a huge part of the Pokémon World Championships – it’s in the name – but I'm not going to talk about the actual tournament itself. I want to talk about the excitement surrounding the event and some of the things that went on around the convention center last Saturday.

Pokémon is about more than just video games and trading cards. It's more akin to a social club where you can meet new people, make friends and have fun doing so. If you've ever been to a convention, then a lot of the setup here is going to be pretty standard. The Championships took place in a giant conference hall with space for several hundred people. There were dedicated areas for championship matches, non-tournament matches and, of course, conventional off-camera shenanigans. 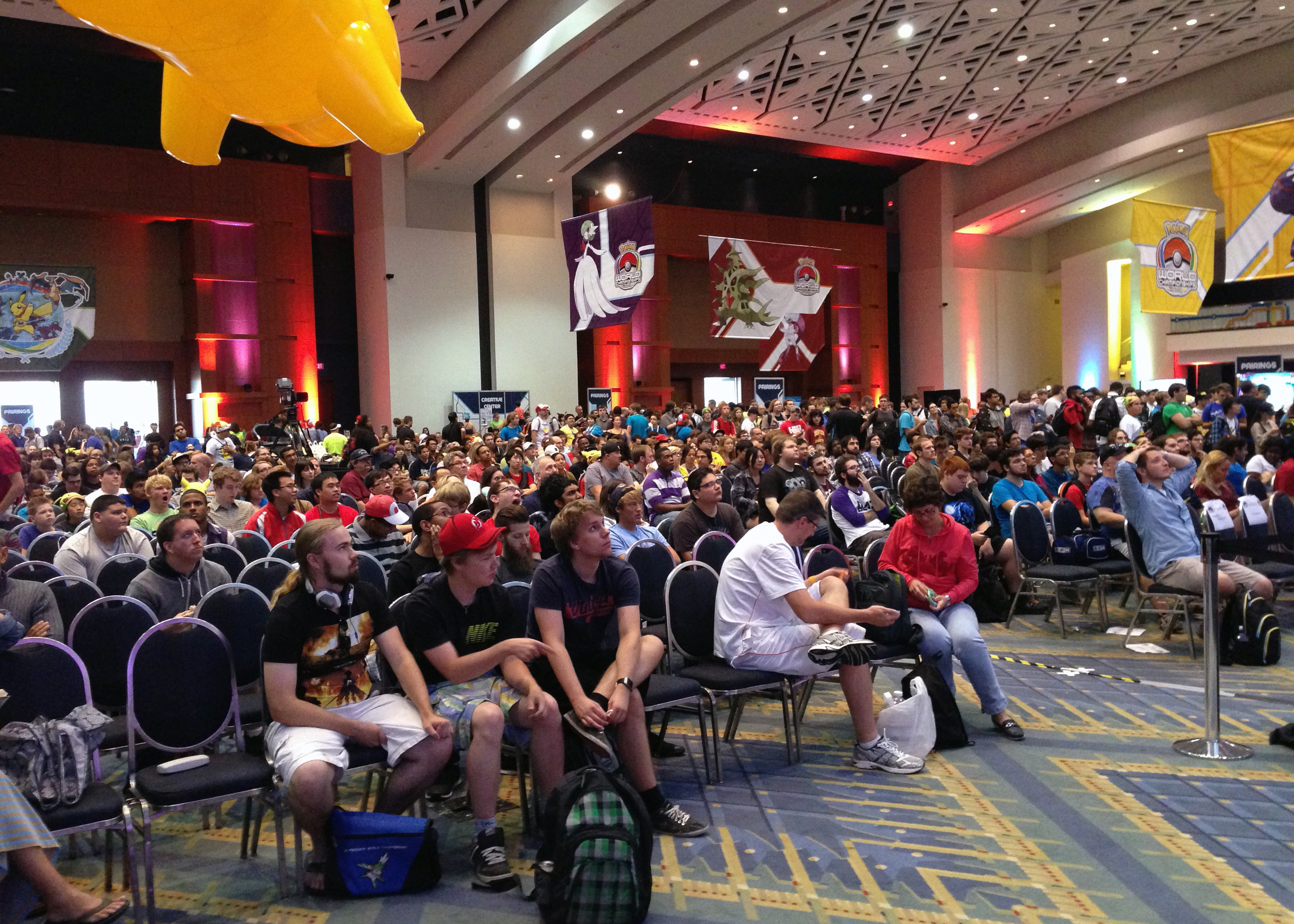 The left side of the hall was the place to be if you were playing the video game tournament. You just needed to look for your name on a sheet of paper placed outside the barrier, then proceed to your assigned table. If you said ‘Prepare for trouble! Make it double!’ it wouldn’t have been an understatement by any stretch of the imagination. Also close by was the area where you found the non-tourney events for people who didn’t qualify for the World Championships proper. This was organizers' way of ensuring everyone could compete for prizes, even if those were on a much smaller scale such as the leftovers from the Pokemon League matches. The right side of the hall housed the trading card game tournaments, arranged in the same fashion. Simply find your name, take your seat and get ready to battle.

The main stage, located in front of the throng of those in attendance, was where a pair of Pokémon masters would do battle. Streamed live across the internet, this pairing would consist of two players who were either previous or current champions, or those with high win/loss ratios. It reminded me of being at an NBA game, with live commentary of the battles provided, displayed on large video screens for those further back in the raucous crowd. We did get to see trading card game matches on the main stage during the final day, so it wasn’t exclusive to the video gaming side of the franchise at all.

Stepping outside the hall, you’d find some interesting things happening, with people finding ways to make use of their time while waiting around – even if that was just watching others have a good time. Most of the people attending these types of events are generally younger kids and teenagers, so parents will usually be in attendance, but they’re likely to spend their time sitting at a table. That said, if you couldn't find a table, then taking the floor next to a wall was a pretty popular choice for pretty much everyone. 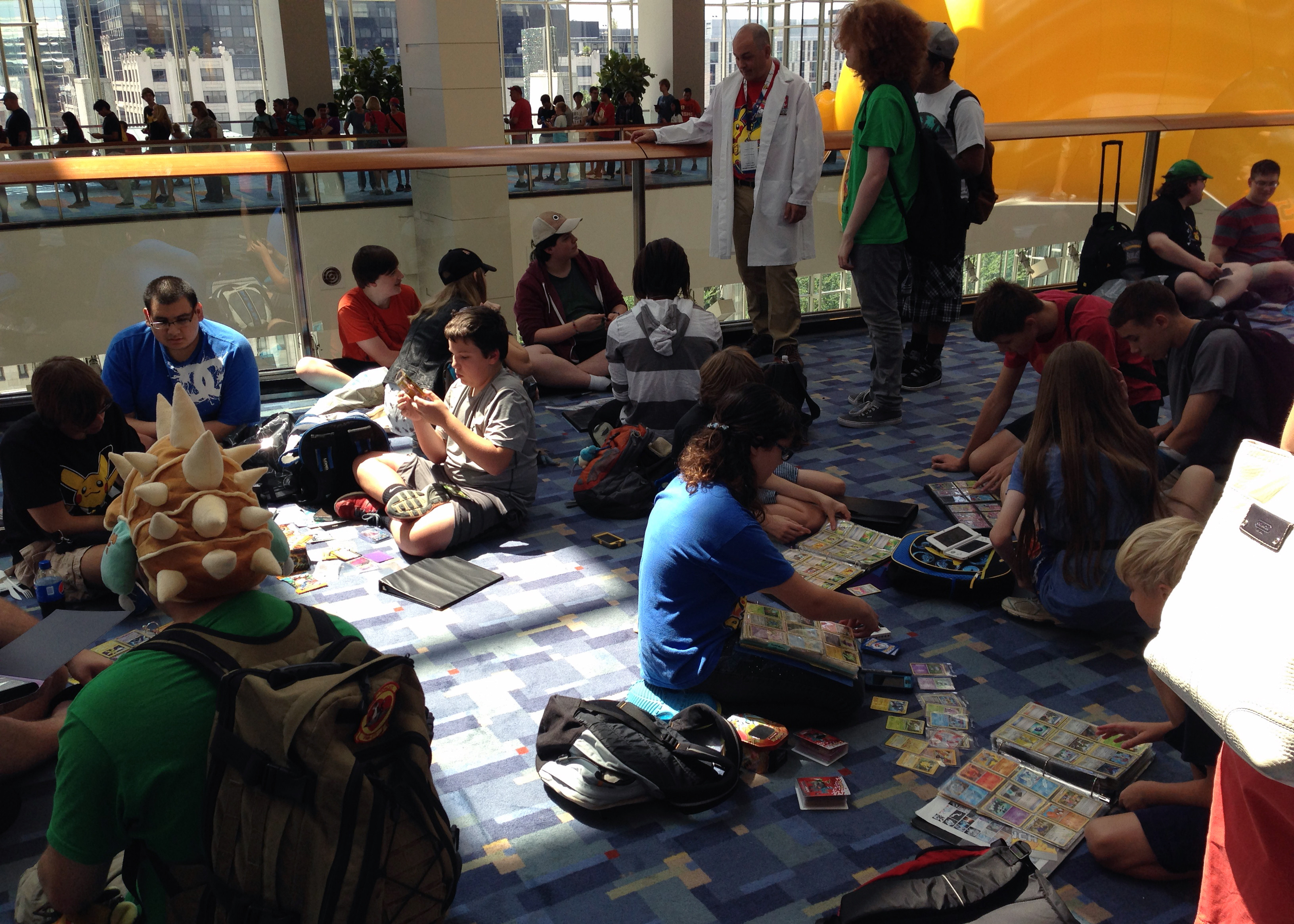 Organizers also provided a creative center for the youngest of kids to color pictures of Pokémon. For participating, they’d be rewarded with deck boxes or extra energy cards. It might not sound like much, but it allowed the younger sisters and brothers to not feel left out, or bored. They also give out a special digital Pokémon creature at each of these events, a collectable that could range from a shiny version or one that knows a special move it normally doesn't learn. For attending, we were awarded Aegislash -- a dual-type Steel/Ghost Pokémon that came with an item called Weakness Policy.

Also on display was a hands on demo of the iPad version of the Pokémon Trading Card Game Online that played exactly like the web-version of the game. Filling out the floor was an incredibly popular retail store, like a smaller pop-up Pokémon Center that was set up for people to buy official World Championship merchandise. The line to get into the shop was two hours long and wrapped around a huge chunk of the top floor. It was really cool to see other people set up their own quasi black market to sell their cards or even original creations they’ve made. Everyone grouped up to to step up shop. One pioneering individual even set up an artist's corner and offered to draw a picture of a Pokémon for $3.

There were even some rare cases of cosplaying found at the convention. I counted around five at most, but I did see a pretty neat effort where the artist made a dress out of Pokémon cards. 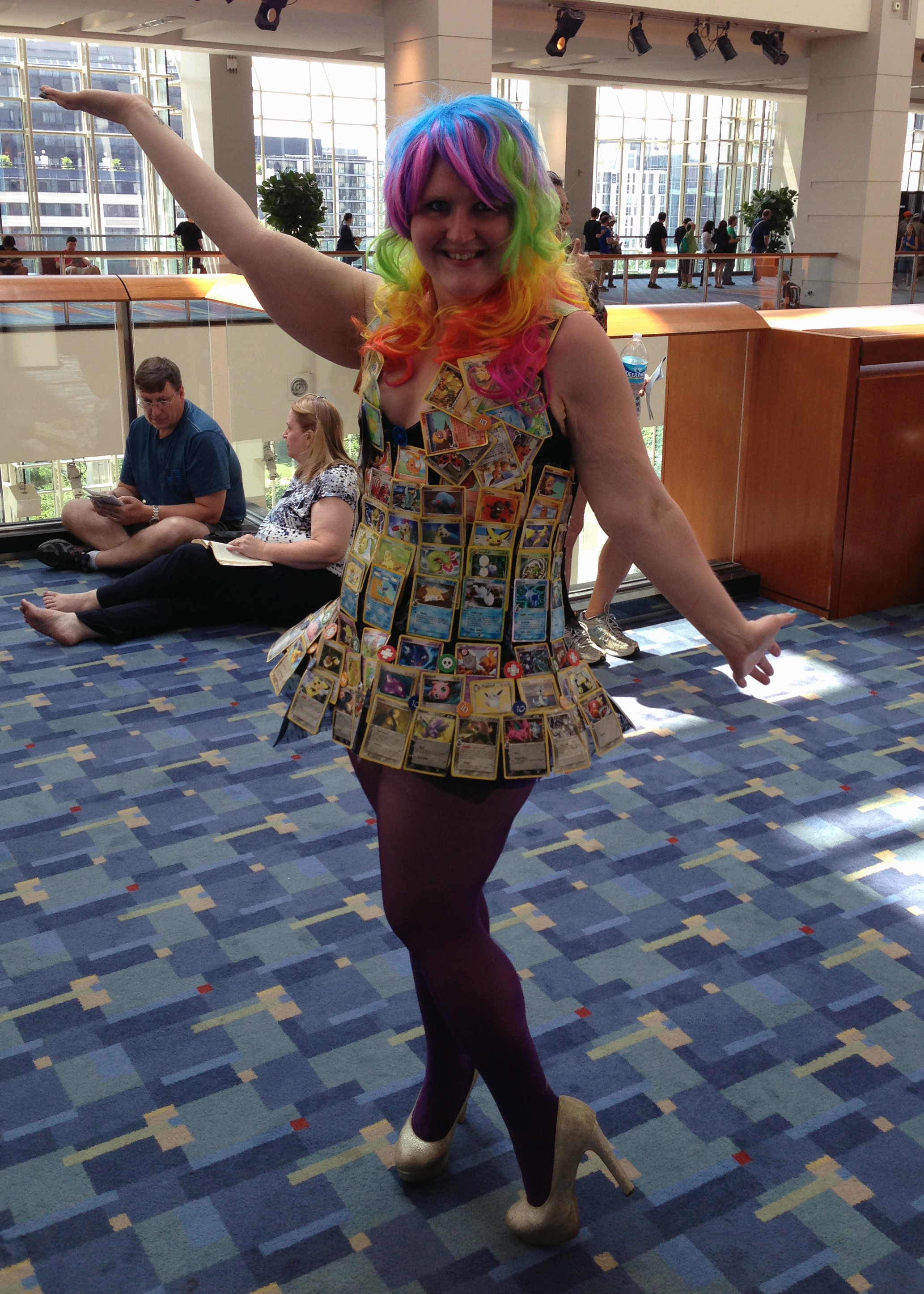 If you've ever been to a convention you know that finding something good to eat can be a pain in the butt most of the time. Normally, you have to leave the event and go on an adventure to find somewhere reasonably priced and not insanely crowded. The Washington Convention Center had a food stand set up near the main hall. If you didn't want drinks, chips and hot dogs option, you could hit the Subway located right outside. Lines are usually a nightmare when you're hungry, and this was a refreshing change.

That about wraps up what to expect if you attend the Pokémon World Championships. When people weren't competing or selling things, they were hanging out with friends or challenging strangers to battles. The Pokémon community is a great collective where friends, family and strangers can all come together and have fun. It may be a competitive scene at its core, but everyone was still laughing along and having a blast with no rage quitting or scorning of others.

Being a part of this community is a lot of fun, and I look forward to attending more of these events in the future. If you get the chance to go yourself I highly recommend it. 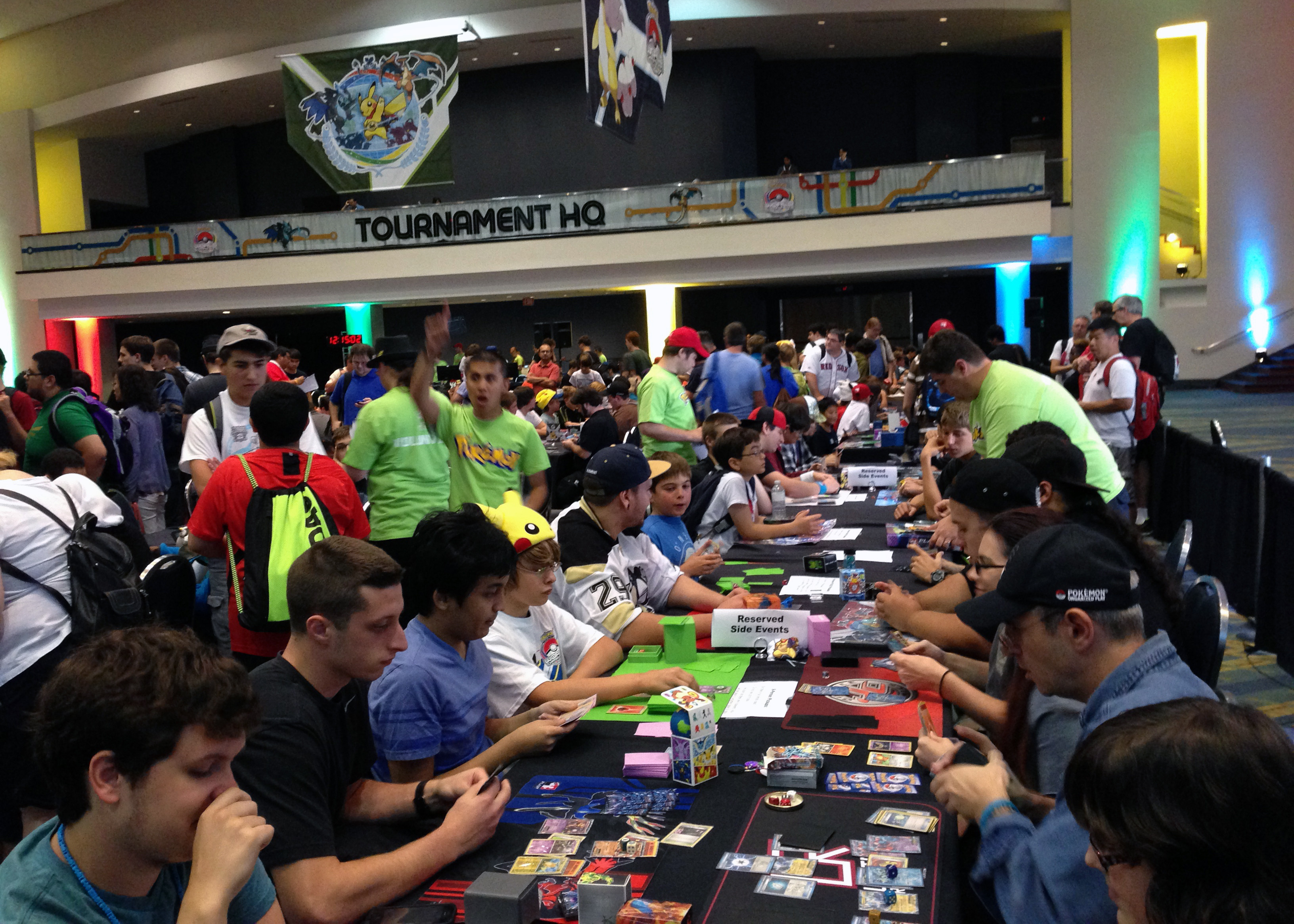 Update: You can also check out more pictures of the event from this imgur album.