PlayStation 3 was my dream.

When it launched in Europe, I was 13, so I couldn't afford it. I had some postponed money, but you know, it wouldn't be enough for PS3, because it was really expensive. Fortunately, one year later, in 2008, my parents (dad especially) decided to buy PS3 (fat 40GB) for me.

I was sitting in the restaurant in the shopping centre with my brother and dad, and dad left us for a moment. After 15 minutes, he called me saying that I should go to Empik (it's Polish store with games, books, movies, music) and choose the box. Wow, I was very surprised back then! My dreams actually come true. When I was choosing wanted box, I almost started crying. You know, after spending two years of reading various stories about PS3 on the internet, trying to imagine that I have one, it was something special for me.

So it began. I was finally a PS3 gamer! I bought GTA IV on the premiere. Later, on June 12th, Metal Gear Solid 4 was published and it was the most important game for me, the game that I bought that console for. When I was a kid, in 1999, I was playing first Metal Gear Solid and I absolutely fall in love with it. So buying the 4th part was an obvious choice :)

As it turned out, GTA IV and MGS4 were the only games on PS3 that I bought on the launch ;) PS3 games prices were expensive, so for a teenager it was really hard to buy new games. It end up with buying one game for 2-3 months. Damn, I really regret that I didn't decide to sell / swap games...

Anyway, in August 2010 my PS3 died (YLOD). To be honest, I felt that it can happen. I cannot afford a new console, so I decided to repair it. I spend several months to earn money for that repair. In January 2011 I sent it to repair, but the person who was responsible for it was not reliable and it took almost 4 months. In April, I was with my PS3 again :)

From that moment, I have played less and less. School was taking most of my time, and my PS3 started to become very noisy. After finishing high school this May, I decided to play lots of games - especially exclusive ones - to make up this 3 years.

Unfortunately, I would not do this. My PS3 died for the second time few days ago in the morning, when I was playing Mass Effect 2.

I'm not going to repair it once again, so I'm currently selling it and most of my game library for PS3. Later this summer, I'm buying a laptop, which will have good GPU that is suitable for new games. But now, for - I think 2-3 months - I just don't have a gaming platform. Yes, I have a PC, but the GPU is weak - it's integrated Radeon HD4200. I barely can play games like League of Legends, Witcher or first Portal...

Well, I'm sad. I know that my PS3 can die for the second time, but I was hoping that it can survive this summer at least, to give me a chance to make up with all great exclusives (or console exclusives) that came in this generation. When I finally started to have that special feeling for games, watching E3 conferences and other videos, my PS3 just died :/

So, as I said before, I'm moving to pc gaming later this summer. I might buy a new PS3, but to be honest - digital PC games are cheaper and it's a deal breaker for me. I feel sad that I wouldn't be able to play The Last of Us, Heavy Rain, Yakuza or God of War...

This is how my PS3 looks right know (this is the picture I'm using in an auction) - almost like a new one, right? ;) 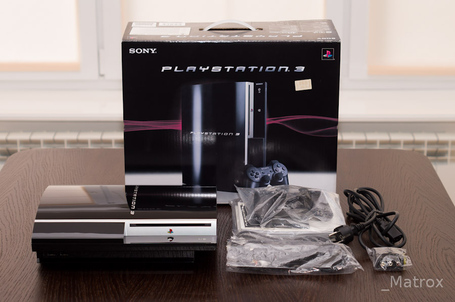