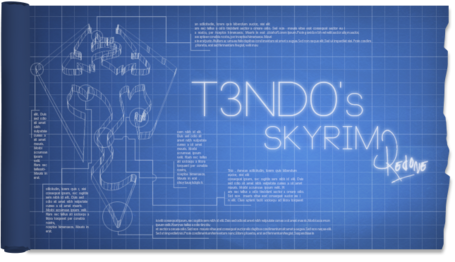 Greetings fellow Polynauts, and welcome to this thread who's main purpose is to educate you on a recent mod I've been checking out that, as the name implies, redoes Skyrim. Now, I have shown some images previously of other mods I've checked out, like Tropical Skyrim, but honestly, that's purely aesthetics. No, this here is more like a massive rebalance to the game. It changes the game, alters how mechanics work, adds mechanics, works in tandem with a few other mods to truly change the way this game is played. And by god, is it ever amazing.

So, where do we begin? Well, how about I first let you in on the other mods that go well ("recommended" usage alongside this mod) with SkyRe (abbreviation of Skyrim Redone). The first major one is called, "Skyrim - Community - Uncapper" (actually, it's more like a requirement, but hell, I'll start here). What the heck does this do? Working in tandem with SkyRe, this makes it so that you're level cap is no longer 80... it is now 300. Wait, why so high? Give me a moment, I'll get to that. There's a lot to go through here, okay?

Next on the list is SKSE (Skyrim Script Extender). Quite frankly, if you're playing Skyrim on PC, you should already have this for using SkyUI (just makes organization SOO much better). This is also how you'll be using stuff like the community uncapper.

An optional mod you can have with this is "Deadly Dragons". Now this one is interesting, because while it does make the dragons in Skyrim more of a threat, you can balance it a bit so as to make them a bit more manageable. Make it so that essential NPCs can't be killed, keep dragons outside of cities (if need be), spawn more dragons if you feel 1 is a bit too easy (although, once I start getting into SkyRe... yeah, you may reconsider), have the spawn rate change, etc... this is mostly to make the dragon fights a bit more interesting.

A mod that is actually sort of influenced from SkyRe is frostfall. What this does, is make the game a lot more realistic by having stuff like weather actually affect you. This will potentially DRASTICALLY change the way you play. You can't just run up the side of a mountain with a snowstorm, you might die from the cold. You can set up camping spots, create a fire, harvest wood to create a fire, outdoors-sy type stuff.

Finally, WTF Random Encounter Zones (Where did These strong enemies suddenly come From?). This makes it so that areas have different level scalings regardless of your level. An area that would have actually been pretty easy to beat in vanilla, might act like a level 30-40 dungeon in some cases, depending on how you set it up. So, while I haven't really bothered to want to use it, I might consider down the road.

NOW let's get into the meat of SkyRe, and what it is. For starters, as the name implies, it rebalances and does some massive tweaks to how the game mechanics were originally set up. Some things scale differently, other things are completely reworked, and some things are now actually worth putting perk points into. 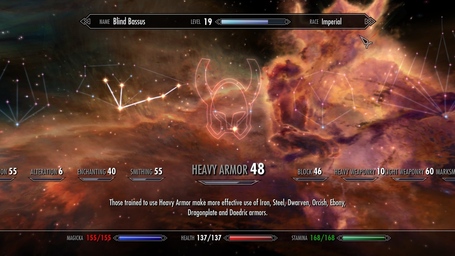 While this pretty much looks unchanged, there's some major differences here compared to Vanilla. The BIGGEST would have to be how Smithing works. Smithing is now quite a bit more versatile, and unlike before how you could just spam certain item building to speed it up, this one won't allow this as Jewelry is actually a whole separate perk. Actual improvement of weapons and armor is an actual perk, while the various types of weapons/armor are side perks. Left side is Light, but ends with Dragon being exclusive, while Right side is Heavy, but ends with Daedric being exclusive. Not a bad trade-off, imo. Also cool, is the fact that you can actually melt down armors and weapons to get back the raw materials you had. Mining increases smithing a little bit. So does smelting. You actually need 3 ores of any kind to make an ingot, and creating Steel requires charcoal (which is acquired by smelting firewood. Go figure).

Archery is neat in that it's been broken down into 3 separate categories: Longbow, Shortbow, Crossbow. The first perk grants you increased damage and drawspeed, and allows Crossbows to initially ignore 60% of armor. Going down the Longbow tree will give you more stuff related to sniping and such, while Shortbow is more combat and hunting based. Crossbows now have perks to allow for certain improvements to be made to them, and can allow for stuff like deadlier bolts to be made.

Magic was fined tuned as the creator thought that certain skill trees were far too OP. With Destruction, you just needed to stun lock (Impact). Illusion pretty much made you a "god", and... well... that's all I actually remember being mentioned.

Destruction got tweaked so that it's a bit more risk/reward, but now as you go up the elemental tree, you'll notice you can now get resistances to the type of element you spec towards.

Now, one thing you will notice right away is that you level quicker. Much quicker. Kind of offsets the new added difficulty. Why is it like this? Well, for starters, more things give you experience, and since a lot of those things you tend to do anyways, it stands to reason it accumulates quicker. And since you pretty much have another 220 levels to go (considering the perk trees have perks that require you have to have potentially 135 in some of those skills), well, it allows you to gain access to those skills and to quickly mess around with them.

And because you level quicker, the enemies also get tweaked with this as well.

The enemy AI has been fine tuned to make the game substantially more difficult as well. They're more aggressive, are actively trying to hunt you down, and the "detected" state of sneak (with the eye not fully open, but getting there) now lasts about 6 times longer. Enemies will now swarm you, and some have even been scaled in such as way that they're probably on par with your own (and in many cases, even higher).

I could easily go into an incredibly long piece about this mod. However, for full coverage of all the changes made to the perk trees, check out these three videos.

Skyrime Redone (The mod itself)

Skyrim Community Uncapper (to make sure you can scale appropriately. This is the where the whole leveling magic happens)

Anywho, even if you don't really bother with this mod, this just goes to show how much some people are willing to want to change things if they're not happy with them. And in some cases, it just ultimately makes the game better.