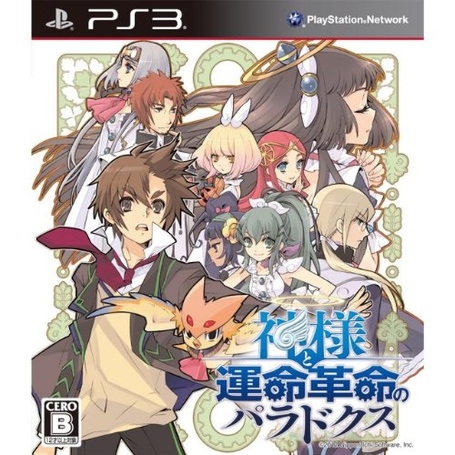 Well, from what I have seen, I doubt anyone would care about this game in this forum. but I still decided to write it, because, while it's not the best game ever made, and I'm pretty sure it's not a game for everyone, but I do think that it's a very well-made game that it deserves more attention than it currently has.

Well, just like every game from NIS, the story in The Guided Fate Paradox starts out pretty ridiculous. Renya is yout average ordinary high school boy, but if there is one thing that's special about him, it will be his extremely bad luck with raffles. One day on his way home from supermarket, he saw a rather cute girl hosting a street raffle and was insisted to give it a try. Without any expectation, Renya ended up actually winning the first prize. Just at the moment he was wondering what the first prize is, the girl informed him that he is given a chance to become a god and knocked him out with a nailed-bat. After he woke up, he was greeted with six pretty girls and handsome men in maid and butler uniforms who claimed themselves to be angels to assist him as the new god, and as a god, Renya's job is to grant people's wishes by guiding their fate through a dungeon crawling machines. 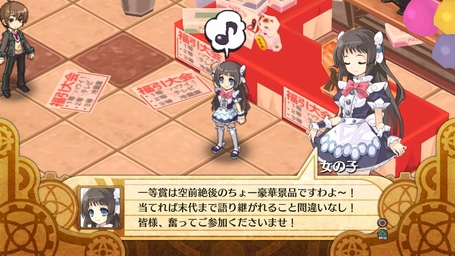 If you are expecting some humor in the story, well, there are some, but not as much as, say, Disgaea or Z.H.P. For the most part, the story focus on the plot and characters. The plot itself is nothing new, but it helps to move the characters, which are the most interesting part of the story. While you have the typical hero Renya and the typical heroine Lilliel, there are also some rather silly characters like Lanael, who is a totally delusional chunnibyou and Cheriel, who is an angel with a personality of a devil. However, while the characters seems to be based on silly motifs, there are also a more serious side to each of them, like Lanael, who always seems to be plotting something serious behind everyone's back and she is probably the character you can't trust the most in your party. I also wanted to mention that NIS actually managed to write a successful little sister character that doesn't involved incest, but a real sibling relationship that doesn't involve her bossing her brother around, which is rare in a Japanese game.

Overall, it isn't the most interesting story ever written, but I found the story and characters to be entertaining enough to accompany me through the whole game.

Okay, I don't expect too many people to know what the hell Rogue-like is (of course, I can be wrong). If you don't know what it is, but you have played games like Z.H.P., Shiren the Wanderer series or Izuna series, that's rogue-like. If you don't know what rogue-like is nor have you played games that I mentioned above, here is the long version. Basically, it's a sub-genre of RPG that focuses on dungeon crawling. But unlike other dungeon crawler like Etrian Odyssey, the game does not have battle transition, instead, you will be able to see the enemies on your sight directly on the map, and every time you make a move such as moving or attacking, all enemies on the map, whether you can see them or not, will simultaneously make a move as well. And if you die, most rogue-like games will strip all the items you are carrying as a penalty (there are also some harsher ones, such as lowing your level as well).

If you still can't get the idea because you are just dumb I suck at explaining, here is a video from 4Gamer as an example.

So other than the standard stuff you can find in a rogue-like, what does this game has that make itself different than the others in the same genre? As the spiritual successor of Z.H.P., there is a time limit for exploring dungeon that will decrease for each step and the moment the gauge reach zero, your HP will start decreasing each step. You can also replenish it by consuming either the food you brought yourself or food you can find in the dungeons. However, the time limit is rather long compare to Z.H.P. and most of the time you shouldn't have too much trouble managing it. Another unique system the game has is the equipment and skills. You don't learn skill from leveling up, but instead they comes with your equipment. That gives the game a lot more flexibility when it comes to managing your equipment, because stats are no longer your only consideration. Other than skills, the equipment can also gain experience by using them. Every time you max your equipment, you will be able to level up it by spending money, which also gives you some really huge optional grinding like NIS always does. 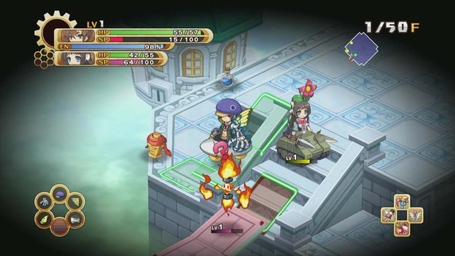 Speaking of grinding, NIS did something different in here this time in the leveling system. There are two separate leveling, your standard levels and your total levels. Every time you leave the dungeon, your level will be reduced back to one and your stat will return to it's base. However, the levels you earn in the dungeons will be added into your total levels, which will determine your base stats at level one. In other words, whenever you enter a dungeon, you will have to fight the enemies on the way so that you won't be under-leveled in the next floor, and it makes stay extra cautious on not dying so that you don't have to start everything over again. Granted, the dungeons are not too long, but it is a bit tedious to play the same dungeon over and over again sometimes. However, other than total levels, the other way to gain more base stats is through leveling your equipment. Other than upgrading your equipment, you will also gain an extra stat boost for every maxed equipment, and you can put those boosts on or take them off anytime you want outside of the dungeons, which creates a more casual experience withing a hardcore genre.

So, after all these paragraphs just to explain the gameplay, I'm pretty sure you are rather confused right now. That would also a flaw I found the game has, the tutorial throws a lot of information at you at once, and it will take time to get used to it. But overall, I found the gameplay pretty enjoyable. It does has some grinding moment, but no more than necessary, and the equipment and skills that came with it give the game a lot more varieties.

For most RPGs, the boss fight are usually just the stronger version of what you already fought, not the case in here. Each boss fight doesn't limit itself into just defeating a certain enemy, but instead it takes on the scale of the whole map that's designed just for the boss fight, and many of them require you to use your brain, strategies, positioning and utilizing the environment other than just your stats and brute force. From my experience, I can tell you that the boss fights are very well designed and they are probably the best part of the whole game.

For the presentation, there are quite a few things I want to talk about. The first thing are the cutscenes. Most of them are played every time you advanced a floor, and , like I've said above, each dungeon is not that long, so you will probably be watching a cutscene for every 5-10 minutes. The story itself is enjoyable, but the cutscenes does ruin the pacing for a bit.

In terms of the graphics, the sprites did a very good job at recreating the characters in the art style of Itou Noizi, the character designer and illustrator of the game, and the portrait they used in the conversation scenes are also well animated, which makes the cutscenes a lot more lively, For the quality of the sprites, well, they are not the worst graphic, but they are nothing worth praising either. For some reason it actually looks little bit worse than Disgaea 4, NIS's previous title.

The equipment you have on you also reflect visually. You might not be able to dress as Silver Crow from Accel World like you did in Z.H.P., but there are enough cool looking equipment (as well as the lulz ones, like horse mask,) for you. Also, Prinny hat and Prinny Jet.

As for the music, most of them are nothing too outstanding, but what I want to mention are the vocal tracks performed by Tousei Teikoku that play during boss fights. They are great, and they really get you bumped for the bosses. In fact they are one of the very crucial part of what make the boss fight awesome outside of the level design.

-Story accompanied by an interesting cast

-Flexibility and varieties the gameplay provide

-Mild casual experience that are friendly to newcomers of the genre, but also manage to provide for the hardcore players

Oh yeah, the game is coming out in English on Nov. 5th in NA and it's already out in Europe, so no worries about it not getting a localization.