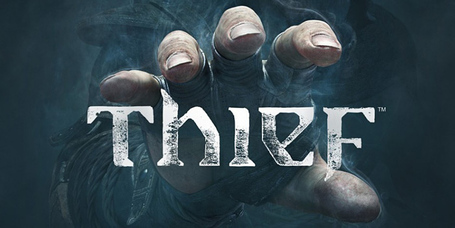 I was originally going to post this simply as a comment in Polygon Daily, but the sheer amount of babble that I ended up with was a bit staggering... Even having played only the first three chapters/missions/whatevers, I still find that I have a lot to say about the latest entry in one of my favorite series.

Disclaimer: As I said above, I haven't completed the game (or even hit the halfway point), so if it suddenly takes a nosedive, you'll be sure to hear it from me later this week.

Gameplay
Everything is as I remember it... I can sneak, I can run, I can do a realllly slow sneak (useful when passing behind a guard through water/broken glass mainly or dragging out your playtime by RPing as Garrett army-crawling everywhere), and I can traverse the environment with glee and abandon (and a few unintentional instances of plummeting to my doom).

The inclusion of context sensitive climbing/jumping is definitely a step back in regards to having a "go anywhere" feel, but it really isn't all that out of place in the game... Maybe the part of me that hated the mechanic has finally succumbed to overexposure and died.

They go with the tried and true "look for 'subtle' paint splashes to know where you can climb/jump", but at least there are plenty of options... I haven't really felt like I was being corralled just yet, with the levels feeling open and having a good amount of freedom of choice (at least early on).

I haven't bothered with combat (it's Thief, not Assassin/Pugilist), but I did have to bludgeon one guard down before reloading a save, and melee seems serviceable for a game that really seems to reinforce the need to avoid it at all costs. Basically, you have arrows (left mouse button) and a blackjack (R key). That's it. I mean sure, you have some fancy arrows (fire, water, some gas thing), but they're more for manipulating your environment than slaughtering guards. Your main tool is the blackjack, which you use when you quietly sneak up on a guy and brain him to make sure he doesn't interrupt your gleeful looting.

Difficulty
The game doesn't necessarily hold your hand, but so far it's not anything too challenging. Guards patrol as you might expect, stopping to have conversations (which are well written & well spoken), and reacting to any strange noises or shadows or blundering taffer as anyone would (well, if the normal reaction is to talk loudly into the creeping darkness, stumble around a bit with a torch, and then go back to standing around like nothing happened)...

There are quite a few options that can be disable/enabled to enhance whatever difficulty you happen to be playing on... You can completely disable killing, you can remove the focus mechanic entirely, or make it so that the second you're spotted even once, your game is over (Ironman)... So anyone saying that the game is catering to the casuals is really just not utilizing all that the game has to offer... just from the new game you're given 4 difficulties (I chose normal, but now kind of regret it), and the extra toggles on top of that would probably leave you with a rage-inducing level of difficulty.

Graphics
As I'm playing on the PC, this is actually a thing I can talk about, as opposed to "Hey, it works out of the box" on consoles (don't get me wrong, I love my consoles... but you don't get a lot of control over how pretty things look, ya know?). Let me preface this by stating that I'm playing the game on a 3-year-old HP laptop (which was pretty swanky when I first got it, I won't lie), so its not like I'm using dual Titans or something (what am I, TotalBiscuit?)

The game looks fantastic, even on middling settings... And for those with the power, the game can look absolutely stunning, in a dark, danky kind of hiding-in-shadows game style. There are options for all kinds of fun things like FXAA, and SAA, and... some other acronyms and features that mean absolutely nothing to me (tessellation, contact hardening shadows, parallax occlusion mapping oh my!) I'll readily admit that the first thing I did was turn most of those off. I have the game up at 1360x768 (down from native 1920x1080), with medium shadows and that hardening shadows on for giggles, high textures etc etc so on and so forth, and it runs surprisingly well for a new game... Like, shockingly so. Counter it with Strider, which I also had to drop down to that resolution, and it runs leaps and bounds better, with minimal (noticeable) drop in framerate at all.

One thing that did stick out, however, is that the character models are kind of... meh. It doesn't quite feel like a "next gen" game when the characters have a slightly jagged look to their faces. It wasn't noticeable on everyone, but Erin and to a lesser extend Garrett certainly had angular faces. For the most part, it really doesn't matter, as you'll only ever really be noticing it while watching a cut scene... and hell, it could just be due to my crap video card, so take it as you will.

UI
The graphical options aside, you also get a bunch of toggles for various UI elements to boot... you can turn pretty much everything off or on as you see fit, and a few other elements (health, weapons, stuff like that) have a third option to dim overtime, which is nice. Overall, the UI is pretty clean and unobtrusive... though the minimap is a bit far from the top corner, but that's a minor gripe.

Audio
Music and voice acting aside (long story short: they're both good), the sound effects in the game are top notch, even if the footstep sounds for running are a bit limited.

This would be one of the few games that almost feels like it requires headphones... Creeping along, ears pricked for any possible hint of guard interest, I felt totally immersed in the world as I snuck along the rooftops, shimmying along pipes to make my way into the crematorium for one mission. Though the constant shuffle of Garrett's feet as I slowly turned always made me think that someone was sneaking up on me... which is not good for my heart.

However, it's not all puppies and rainbows, sadly (on the PC, or at least on my PC). There were multiple instances of laggy audio/subtitle sync problems, as well as just terrible levels between music/voice/sound effects... When I'm trying to listen to a dramatic line from a bad guy, it really dulls the moment when all I can hear is the rising crescendo blaring through my skull.

Also, some of the dialog is a bit... unnecessary. Much like my gripe with DMC, it feels like they're cursing for the sake of cursing, like a kid who just learned that F★★★ is a flexible word.

Story
Honestly, I haven't gotten far enough into the game for the story to really play a major part... I hit the main plot point (protip: glass domes are prone to failing under the weight of a person), and then it went down to various fetch quests for the master thief. There were bits and pieces of story along the way, and run-ins with the main antagonist, but overall the story hasn't done much of anything beyond give the other characters a reason to boss me around a bit.

Initial Impression
So far, the game lives up to what I expected from a different developer working on a game from a series I loved. It doesn't exactly reinvent the wheel, nor does it just blindly stick to the old trappings... it walks a fine line between catering to fans and drawing in new fans, and I won't know if it succeeded or fell to its death until I finish the game entirely. But so far, its making a good effort of it all.