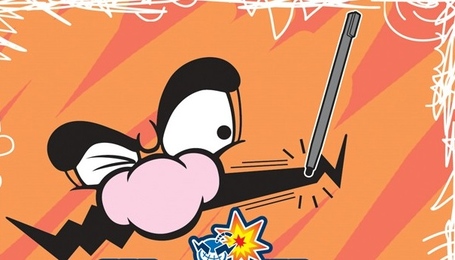 Launch came for the Nintendo DS here in Europe in mid 2005, and with it came the delightful WarioWare Touched. I was working in GAME at the time, and the demo pod had a single player mode where you had to just survive. It was pretty much the exact same as the final build, albeit there was much more meat in that particular pie in terms of content.

As I'd never played a dual screen game before, I had my concerns that the second one would be extraneous, surplus to gamers requirements. WarioWare Touched demonstrated itself to be a pitch perfect example of software developed to showcase the dual screen format, one of which was touch enabled - a first for a games device aimed at a mass market.

Once you got past Warios' opening scenario you found yourself unlocking more characters, more stories and more ways to play. There were also many challenging moments in WarioWare Touched, with segments that included some frustrating characters (Go! Go! Mike!), but some incredibly fun ones as well (9V & 18V were entertaining throwbacks to the NES/Game & Watch era). However, the best set of puzzles in the game belonged to Ashley and Red; this collection of minigames were bundled under the collective term, 'Total Drag'.

Have a look at this video of Ashley & Red's scenario from the game, because whilst it might look like a simple dragging mode it'll give you an idea on how adding a smidge of attitude makes a good game, great.

I recall playing this with my then 7 year old niece, she enjoyed this scenario the most - probably due to the catchy song.

If you've got an ageing Nintendo DS, along with a copy of WarioWare Touched then you'll know how entertaining this game is. If not, you can grab a copy for around $10 on eBay.

And believe me, it's worth every cent.