Borderlands 2 is coming to PC, PlayStation 3 and Xbox 360 on Sept. 18 in North America and Sept. 21 internationally, according to a 2K Games press release.

Developer Gearbox also unveiled a pre-order "Premier Club" for the sequel to its four-player cooperative shooter Borderlands. The pre-order bonuses include a downloadable Gearbox Gun Pack, a Golden Key and the Vault Hunter's Relic: The Gearbox Gun Pack is a collection of unique guns; the Golden Key is an in-game item used to unlock a rare item in the Golden Sanctuary Loot Chest found in Borderlands 2; and the Vault Hunter's Relic is an in-game item that boosts players' gear-hunting fortune. 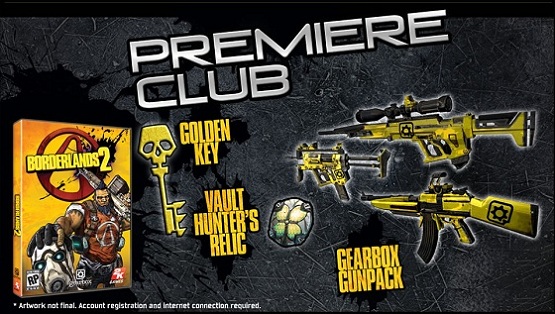 "The addictive gameplay and shooting and looting mayhem of the first Borderlands is back and better than ever in Borderlands 2, taking the franchise to an entirely new level," said Christoph Hartmann, president of 2K. "With more guns, more enemies, more missions, an engaging story and all-new characters, Borderlands 2 promises to bring a new era to gaming this fall."