Last June, Videogamer reported that Microsoft's next home console would be revealed during E3 2012, and that Crytek was already using the hardware to develop TimeSplitters 4 as one of its launch titles; a rumor Crytek quickly denied. Earlier this month, Kotaku reported that the operating code name for the new console is Durango. Today, a now-pulled Tweet from Crytek senior technical artist Sean Tracy seemingly connects these two reports, saying, "Enjoying the Durango developers summit in London. So far, great swag and interesting talks."

Tracy had earlier Tweeted that he was "seeing some CryEngine licensee videos," which will go public "later next week." We've contacted Microsoft for a comment on Tracy's reports, and will keep our ear to the ground for any more hubbub coming from this supposed conference. 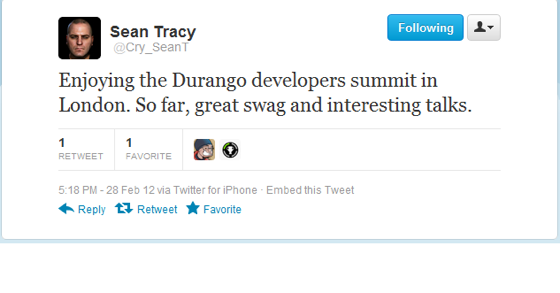 Update: Microsoft responded to our queries, and said, "As an innovator we’re always thinking about what is next and how we can push the boundaries of technology like we did with Kinect. We believe the key to extending the lifespan of a console is not just about the console hardware, but about the games and entertainment experiences being delivered to consumers. Beyond that we don’t comment on rumors or speculation."