We may never see everything created for Call of Duty, only the best will ship, Sledgehammer says

When it hits tomorrow, Call of Duty: Modern Warfare 3's latest content drop won't be just a collection of maps. It will also include new ways to explore tangents of the game's single-player campaign.

While the content collection, that last part of which hits for Call of Duty Elite premium Xbox 360 members this week, includes four new mulitplayer maps (Liberation, Piazza, Overwatch and Black Box), the most intriguing pieces are the two Special Ops missions: Black Ice and Negotiator.

In Black Ice, players spend the first chunk of the mission either riding on a snowmobile or driving one as they fight their way to the diamond mine found in the game's campaign. The inclusion of snowmobiling in the first third of the operation adds a nice diversion from the typical run-and-gun found in Call of Duty maps, though it doesn't play a huge role in the overall Spec Ops mission. Once at the mine, play resolves back to finding cover and trading shots with the bad guys.

Not so with the other Spec Ops mission. In Negotiator, players start off the operation as bound hostages in Himachal Pradesh, India. The goal of Negotiator, which takes place in the opening moments of Modern Warfare 3's campaign, is not to clear the map of enemies, but to save as many of the 35 hostages held around the map as possible. This twist on objectives changes up the way you approach and move through the map. Suddenly you're less worried about mowing down bad guys and more concerned with which enemy is about to kill a hostage. The distraction can lead to a lot of player deaths and makes the game much more tactical. 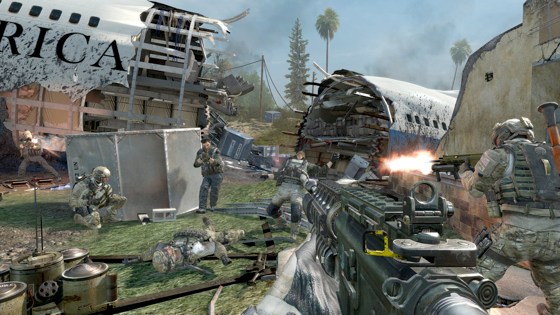 Next, I tried my hand at playing survival mode on the new Black Box map, which takes place around the wreckage of Air Force One and the California mansion it crashed into. There's not anything new here in terms of gameplay, but the map's compact design and second floor lobby makes for solid survival mode play.

After playing through three gaming sessions in San Francisco last week, I spoke with Sledgehammer Games' Michael Condrey about the studio's plans for future Modern Warfare 3 content. Check out the video for our discussion on extending the game's narrative through downloads, the influence that co-developers Raven Software, Sledgehammer and Infinity Ward have on Elite's content and why some Call of Duty ideas may never see the light of day.

While Elite premium members get Black Ice, Black Box and Negotiator as a standalone content update on March 13, if you're not a member you'll have to buy the entire Content Collection #1 when it hits the Xbox 360 on March 20 if you want to try any of it; you can't buy the maps piecemeal. Sledgehammer, as noted in the video, still isn't saying when any of this content is coming to the PC or PS3.