What the F#@K?: Why Ubisoft wanted Demiurge to drop many F-bombs

Share All sharing options for: What the F#@K?: Why Ubisoft wanted Demiurge to drop many F-bombs

After a decade of making games with other people, Demiurge is finally stepping out on its own with Shoot Many Robots. So why didn't Ubisoft think they were going far enough?

The team at Demiurge Studios couldn't quite believe their ears.

After a decade of collaborating on other projects, they were just about ready to release their first independent project, Shoot Many Robots, and publisher Ubisoft wanted them to make the game ... dirtier. Yes, the same pub that brought you Hamsterz Life and Just Dance Kids 2 wanted the side-scrolling shooter just a little more blue.

"We realized we were going to be M-rated because of a handful of things," said Demiurge CEO Albert Reed. "We use beer for energy, there's some blood and there are some swears in the game. I mean, the Fruit Fucker is a hat in the game. 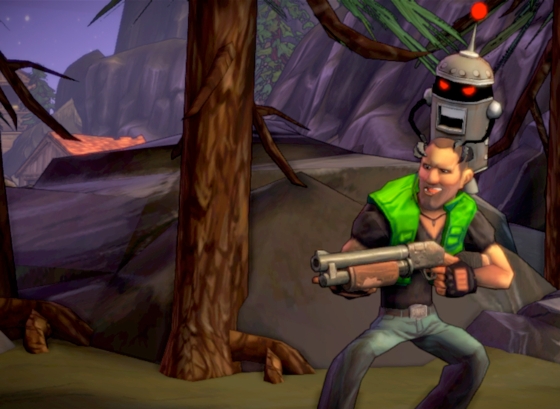 "The phone call with Ubisoft was ‘So, we're going to get an M-rating, could you put some more swears in the game, please? We don't want to be on the border with the ESRB, we want to be clear. So please, more swears.' It was the weirdest phone call in the world."

Luckily for Ubisoft, when a team's first release is literally called "Shoot Many Robots," it's a safe bet that they're no fans of subtlety.

You will likely never know all the games Demiurge Studios has worked on. Even if you comb its Moby Games profile and see the baffling range of games it has tinkered with - everything from the Windows version of Mass Effect to Karaoke Revolution - you still wouldn't have a complete picture.

After a decade of playing midwife, Demiurge has finally given birth to its own bundle of robot-slaying joy. And as you might expect of any baby with a 10-year gestation, the end result is more than a little weird and indelibly marked with its parent's personality. 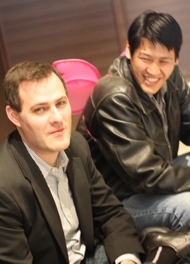 "This was our first time really making an independent game with nobody looking over our shoulder. And every time we were worried we might have gone too far, Ubisoft would say, you know, ‘Go for it. Whatever you want to do.'"

In a world where so many games can't quite escape homogeny, Shoot Many Robots is absolutely riddled with personality. Equipable fairy wings? Yep. The aforementioned ability to replenish health with beer? Sure. (Interestingly, as Ubisoft appealed to the studio's dark side, Sony nudged Demiurge on to the straight and narrow, forcing Tugnut to slurp down life-giving "juice" in the PSN version of the game.)

The game even has an odd, completely optional side-story about the ninjitsu branches of hero P. Walter Tugnut's family tree.

"It's called Shoot Many Robots, so there's no fucking story," Reed said. "But weaved into the loot is the story of a ninja ..."

"It's ninja side of the family," creative director Tom Lin clarified. "There are a bunch of loot descriptions that talk obliquely about, you know, ‘Here's a gun that's passed down from your Great Uncle Ninja,' and now its found its way to your hands. The other people making the game were saying ‘Huh, I didn't know there was a ninja side of the family.'"

Though you might suspect that Demiurge would want to maintain the momentum of releasing Shoot Many Robots and leap right into another new IP, Reed says it isn't going to leave its newborn on any doorsteps just yet.

"We don't know that a sequel to Shoot Many Robots will be made, but we're already thinking about what we'd like to do with a sequel," Reed said. "'Shoot Many Robots 3: We Dropped A Deuce.' That's what our lead designer wants to call it. Always classy at Demiurge.

"Like I said, there's no story in the game, but there is a universe we're really proud of. We think the franchise itself has a much broader set of possibilities. We're looking at what we want to do for a sequel, but we also have two other games in the Shoot Many Robots universe that we're ... incubating right now." 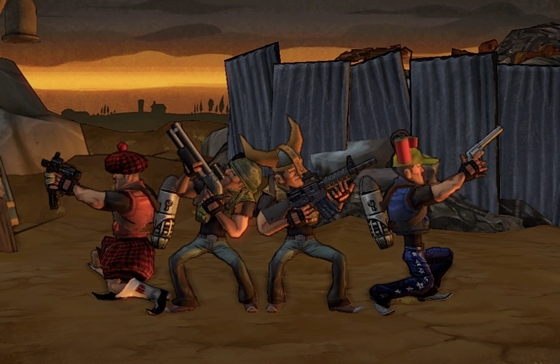 The future may be bright for P. Walter Tugnut but that doesn't mean Demiurge is in a rush to turn its back on the collaborations it built the studio on.

"It's something we really like at Demiurge. We feel like the opportunity to work with huge talents in the industry on really cool projects, to touch a lot of different work, that's baked into the studio DNA at this point. That's something we do really well," Lin said. "When we don't do it for a while, we get antsy."

For Reed and co., the real rush is being involved in the moment when a game finds its unique voice ... even if it doesn't use it to drop more F-bombs.

"You always see that when you're watching games develop. There's a moment in game development where games become ... what they wanted to be all along," Reed said. "But that takes time. It's a winding road."