Players would have shot it out in a first-person perspective on foot and in vehicles.

Share All sharing options for: Mass Effect almost got a standalone first-person shooter

Mass Effect Team Assault would have been a stand-alone first-person shooter with vehicles set in the Mass Effect universe.

Mass Effect Team Assault was to be a standalone, online-only blend of Unreal Tournament and Battlefield 1943 set in the Mass Effect universe, according to an excerpt of Geoff Keighley's The Final Hours of Mass Effect 3.

"For four months after the completion of Mass Effect 2, the Montreal studio worked on a top-secret prototype that carried the working name Mass Effect Team Assault or META," Keighley writes in his 15,000-word exploration of the making of the Mass Effect universe and its popular games. "The goal was simple: to create a standalone multiplayer experience in the Mass Effect universe that would mix the play styles of Unreal Tournament and Battlefield 1943 – and likely be released as a downloadable game."

The game would have had players shooting it out in a first-person perspective on foot and in vehicles like the Mako and Hammerhead hovercraft.

Despite receiving a positive reaction from the higher-ups at BioWare in March 2010, the developers decided to ditch the idea of META in favor of a co-op multiplayer game that used the same engine.

Ultimately, that decision led to the Mass Effect 3's four-player cooperative mode: Galaxy at War. Maybe now that the game's finished BioWare will reexamine that possibility?

For more about the many amazing things that didn't quite make the cut check out our deeper look at Keighley's new app. You can also see a short play video of the shooter in action inside the app, though beware of spoilers if you haven't completed the trilogy. 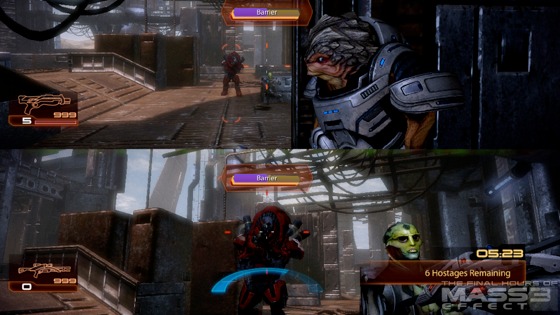