A look at the Mass Effects that almost were

A Mass Effect based on online trading, or bat-people, or an enslaved humanity?

Share All sharing options for: A look at the Mass Effects that almost were

Mass Effect 3 started out as a pitch for SFX and included an enslaved humanity, bat-like enemies and heavy use of in-game economy and online trading between players.

Imagine a Mass Effect that pits a human race genetically created to be slaves fighting against a warmongering race of small, bat-like creatures in a near-future universe. Or maybe a Mass Effect built on the concept of exploring a galaxy of procedurally generated planets in an upgradeable starship. How about a Mass Effect that thrives on a rich trading system between players who meet in virtual environments on Xbox Live? One that includes endlessly unique items and a dynamic in-game economy?

Mass Effect, before it was Mass Effect, was a video game franchise born of a single idea: BioWare creating its own world, its own Star Wars. How it metamorphosed from a project codenamed SFX, with a surprising variety of ideas that never made the cut, to a beloved trilogy that wrapped up this year with Mass Effect 3 is minutely detailed in a lovingly crafted interactive magazine that hit the iPad today.

"When he threw down a concept piece of a dinosaur with a gun, the team instantly fell in love ..." -excerpt from The Final Hours of Mass Effect 3.

The Final Hours of Mass Effect 3 includes more than 15,000 words and 20 minutes of video, interactive photos, unseen concept art, even a mini-game and footage from a never-before-seen first-person shooter take on the Mass Effect game. Written by Geoff Keighley with what had to be unbelievable access to the BioWare team, their personal and work lives and the art they create, the Final Hours hit iTunes this afternoon for $2.99. Keighley tells Vox Games that it will be coming to the PC for the same price in the next few days. You'll be able to pick that version up here.

Fans of the series, fans of gaming, and fans of well-written, well-documented story-telling, need to pick this up.

Mass Effect started out as a pitch for SFX by BioWare project director Casey Hudson over lunch with the company's founders, Ray Muzyka and Greg Zeschuk, in 2003.

"There were no details yet about the main character of the story, but Hudson did have one thing figured out: He wanted the doctors to commit to making a trilogy of games in this unknown and unnamed universe," Keighley wrote. "Yes, he wanted BioWare to make its own Star Wars. So taken aback by Hudson's bold ambition, Muzyka burned his tongue on some hot soup at lunch."

Four years later the game had taken shape and much of what had initially formed the idea had disappeared, though the burned-your-tongue scope of the project remained.

"By the spring of 2007 it was clear that parts of Mass Effect's original vision, hugely ambitious from the start, would never be realized," Keighley writes.

Gone was the notion of an Xbox Live trading system. Gone too was the original idea of a master slave story and bat-like enemies. Some ideas lasted longer before being killed, like a plot about a shadowy organization named Cerberus, which conducted human experiments on a planet named Misery or entire levels built on the volcanic planet of Caleston. 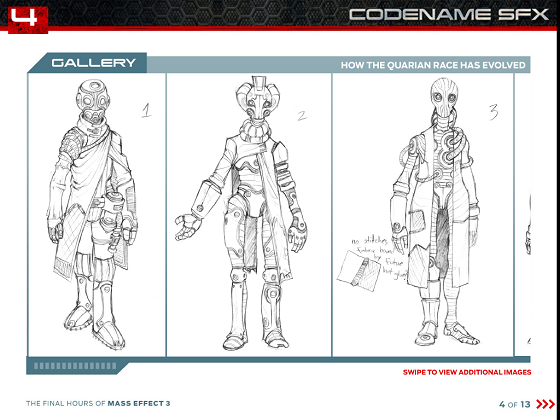 What remained was the the broad vision of a franchise with a narrative shaped by players, a game that on some level transcended genres, and of course a game that was built on BioWare's own unique universe.

Keighley details the ups and downs of creating not just a game but a franchise, carefully charting the progress and evolution of the story and mechanics as Mass Effect came to life. It's an invigorating read peppered with concept art, neat facts and interaction.

The Final Hours of Mass Effect goes far beyond what we've touched on here, this is just a glimpse at one of the many interesting narratives that pop out in the work. If you haven't completed the series you may want to steer clear of the app until you have. It talks about a lot of player choices and touches on some things you may not want to know until you're done... like the ending of the trilogy.