Tech that can help you distinguish between the thump of an explosion and the crack of automatic rifle fire.

A California science company is working on new technology that delivers nuanced haptic feedback to gamers by echoing motion-captured real world vibrations through a game controller.

Haptic feedback in controllers is almost a given nowadays. Gamers are so used to feeling their controller buck with ever digital gunshot that when Sony's PS3 hit without a rumble controller in 2006 the negative reaction forced the company to replace their controller with one that included it.

But the standard for today's rumble is oddly uniform. Firing an in-game gun, racing a car, flying a starship all delivers the same vibrations. Now a subsidiary of science and technology giant Bayer MaterialScience thinks they have developed the next generation of rumble, a compact addition to controllers that goes beyond the indistinct churn of a current-day rumble to deliver nuanced, incredibly fast haptic feedback.

Think of it like an Oreo cookie. When electricity shoots through the two cookie halves they squeeze together, squishing the filling inside. When the electricity stops, the stuffing causes them to rebound. The pulses of electricity can be delivered in such quick successions and so precisely across the grid of the material that it can mimic very precise feelings, from the basic rumble of an earthquake, to a ball rolling from one side of a playfield to another, to the burst of gunshots or sizzle of electricity. 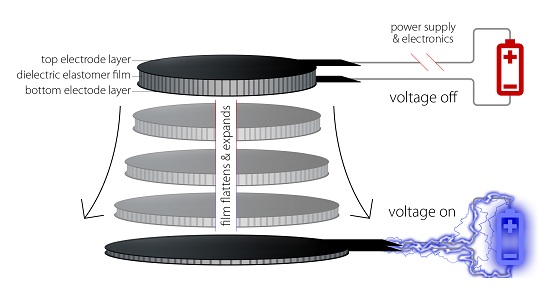 Because it's so thin, and uses just 30 percent of the power needed for traditional rumble, it can easily be added to an off-the-shelf controller.

We had a chance to check out the technology last week in a San Francisco hotel lobby. First Dirk Schapeler, president and CEO of the company, showed off the already-on-the-market Mophie Pulse. This case for the iPod and iPhone uses the Vivi Touch technology to deliver distinct rumbles to iOS devices. But it's relying on sound, plugging into the audio jack of those devices, to translate audio into motion. Schapeler pointed out that the tech hardwired into a controller would be much more precise. Then he proved it, handing over an Xbox 360 controller modified with the technology.

Watching a video of Halo 3 gameplay, the Xbox 360 shook and pinged with a myriad of vibrations, each distinct based on the weapon being fired or the size of an explosion. Taps, rubs, a sizzle or shot, the movements translated so well to what was on the screen that one could almost hear the sounds of in-game fighting even though the video was muted. It was precise and a more than a little revolutionary. 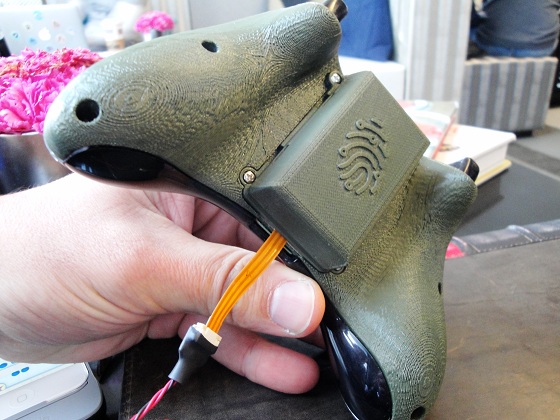 Schapeler explained that they created a specific haptic channel for the Xbox 360 demo that feeds their tech, which was sandwiched in between the battery and the back of the controller, information to control the haptic actuator.

They even have the tech to capture real motion and replay it using their technology. They do that by, for instance, putting sensors on a real gun and shooting it.

"We record the waveforms of the vibrations," Schapeler said.

Think of it like motion capture for vibrations. That info is then fed back to the actuators which replicate the feeling of that gun being fired.

The team already has a special software development kit created to allow game developers to "leverage" the abilities of their actuator technology. They hope to get developers interested in making games that support their tech so they can then convince people the tech is worth having out there.

"We need people to leverage our technology," he said. "Just putting it in existing hardware and saying it's a little better than your rumble motor, that doesn't make any sense."

So Artificial Muscle has been talking with phone makers who may want the tech built in, not as an add-on. They've also been meeting with both peripheral makers and console manufacturers, Schapeler said.