Adventure Time game is coming to DS later this year.

Pendleton Ward, eccentric artist, gamer-at-heart and creator of Adventure Time, wrote early this morning on Twitter that he is working with a studio to bring his popular cartoon series to the Nintendo DS this year.

The news was announced over a series of early morning Ward tweets featuring hand-drawn art from the show and later confirmed by both Ward and Cartoon Network to Vox Games.

"We can finally confirm what you've all been hoping for, speculating on and commenting about: Cartoon Network is, in fact, currently making an Adventure Time licensed interactive game," a Cartoon Network spokesperson told Vox Games. "Series creator Pendleton Ward is working very closely with the game developer WayForward Technologies, and it will be released later this year on the Nintendo DS. That's all we can say right now, but stayed tuned as we will release more details in the coming weeks."

Ward is staying mum about the project beyond his early morning tweets, telling Vox Games "I'm super excited about the game."

"Here we go, a sweet sweet DS game, being made at WayForward Technologies, will come out later this year," Ward tweeted this morning, along with a picture of a well-musceled DS waving its arms around and blinking the letters "OMG" on it's screen. Nearby a smiling, bug-eyed stylus pirouetted in place.

"To be clear y'all, it's a DS game, it's gonna be hot to trot like a horse.. a DS horse.. " Ward added in a second tweet that included a picture of a DS-headed llama being ridden by an old man with the stylus balanced on the top of his head. 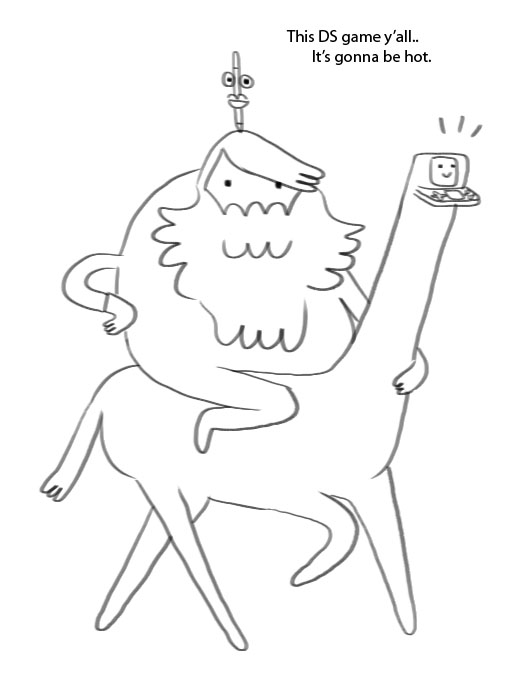 "The Adventure Time DS game will release later this year sometime.. I'm gonna be working on it with @wayforwardtech," he added in another tweet. This one featured a rotund man with a DS for a head, adding that the game will be like "playing my mind on your DS."

He ended the series of tweets with a picture of the man and a stylus making out. We've contacted WayForward Technologies, who most recently A Boy and His Blob, Aliens: Infestation and the upcoming Silent Hill: Book of Memories, and will update this story when they respond.