New 'Sim City' will give you the power to destroy... and create

Share All sharing options for: New 'Sim City' will give you the power to destroy... and create

The new Sim City, scheduled for a 2013 release, is no different. If you enjoyed playing The Sims so that you could lock your sim people in a room with no doors and no bathroom, then you will also enjoy creating a new sim city that has no roads leading out. Or no fire trucks. Or is on fire.

"You can do things like let fires burn down whole sections of your city and watch the poor, burning sims come out of the building," Quigley tells Vox Games. "You can isolate off a section of your city and watch the whole thing go abandoned and wind up with homeless encampments. ... We made it so that you can see them starve and eventually die. That's part of the gameplay."

Quigley says the suffering of the sims is part of the core experience of sim gameplay. Their ability to suffer being what makes tending to them — or not — as a player, rewarding.

"The little sims that live in your city," Quigley says, "have to be fragile. They have to be vulnerable. They have to suffer if you're a bad mayor. If you let their houses burn down then some of them will die. Some of them will be homeless. The reason that's important is because if they're not vulnerable, then there's no emotional reason for you to care about their well being. They don't need you."

The engine driving the new City, Maxis' first full-fledged Sim City sequel in almost 10 years, is the new Glassbox simulation engine, which Quigley says he and his co-designers starting building after the release of Spore, the DNA slash evolution simulator from 2008.

"We took some time and sat down and said: 'What are the constituent parts of the new simulation engine we would like to see?' says Quigley. "We went back into the 10 or 15 years experience and [took] up those napkin sketches."

Quigley says the main lessons learned from Spore were that an engaging simulation game needed to have a stronger simulation mechanic under the surface. He says that for Spore, the team spent a lot of time making the game world look pretty, but not as much time as they should have creating an engine to drive emergent gameplay.

"We made it so that you can see them starve and eventually die. That's part of the gameplay."

"We wanted to give the players tools to make beautiful things but not worry much about what they did," he says.

For the new Sim City, the focus would be the opposite: build the simulation from the ground up, and then worry about what it looks like to the player, and not put anything on the screen that doesn't ultimately mean something.

The Glassbox technology builds on behaviors designed for The Sims, where, if you put a couch into a room, the game knew what a couch was supposed to do and how it would respond and how the sim people would respond to it. For Sim City, that concept has been magnified to encompass the things one would expect to see in cities. Quigley uses, by way of an example, the firehouse.

"For example," Quigley says, "it wants to absorb power. And it doesn't care if that power comes from a nuclear power plant or a coal power plant or windmills. It wants to absorb workers and it doesn't care if those workers come from your neighbor's city or if they come from a high-rise complex or what not. It just wants workers. It's listening for fire alarms, and when it hears fire alarms it sends off the fire truck to go put out the fire. ... It has a particular job that it wants to do in the world. It has particular interactions that it's expecting from the things around it or it will fail." 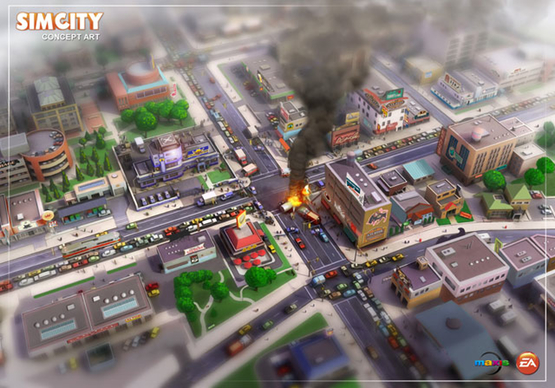 That failure, Quigley says, is the key. If you build a firehouse with no roads leading to it, it will fail. Fires will not get put out. Fire alarms will go unheeded. Chaos. Fun.

Quigley calls these "edge cases," and he says part of his job is planning for those edge cases and making sure that when you intentionally break his simulator, you're having fun in the process.

"We built the simulation to be very robust against those sorts of edge cases," he says. "So what happens if you put [the firehouse] in the middle of a field and then you cut the road? What happens if you demolish it with a disaster? In all of those cases the firehouse behaves realistically. It behaves as a real firehouse would.

"And just like the sims dying because you locked them in a closet, having your city burn down because you put the oil refinery right in the middle of a residential neighborhood … that's good gameplay right there. That's not a mistake.

"If you can't do that, what's the point really?"