How do you make a sequel for a game that doesn't need one?

Share All sharing options for: The Last Human Artifacts: A Portal 2 post-mortem

Note: This article includes plentiful spoilers for Portal 2. But honestly, how have you not played it yet?

"We had 150 people who loved Portal and wanted to work on a Portal game and hadn't gotten to. It, honest to God, was as simple as that."

It's Valve writer Erik Wolpaw's answer to the question so many were asking before last spring when the company released a sequel to a game many agreed didn't really require one.

How the team made Portal 2 worthwhile was the topic of a GDC panel Wednesday from fellow Valve staffer Chet Faliszek.

The first prototype of the sequel actually had very little to do with its predecessor. Silent protagonist Chell was gone (replaced with blue-jumpsuited "Mel"), vengeful AI GLaDOS was relegated to a cameo and, most puzzlingly, portals weren't part of the equation.

It was this perfect mix of totally awesome and completely stupid.

Though those last two omissions met with revolt from early testers, the absence of Chell didn't cause much of a stir. That was, until the players first encountered the recently re-added GLaDOS. Apparently, when she didn't recognize the player (for whom, after all, Chell was just a cipher) it stung. After all, they killed her once! How could she not remember?

"Portal was at its core, an intimate story between these two characters," Wolpaw explained.

With that realization made in the nick of time, Chell returned and a player riot was averted. 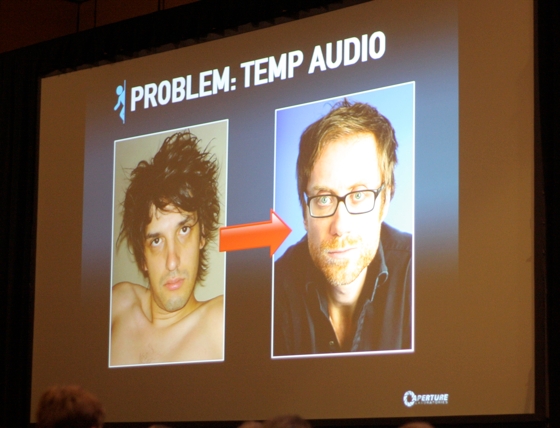 A similar reprieve wasn't granted to Richard Lord, a Valve animator who did placeholder voices for dim-witted personality core Wheatley. That audio was used in an E3 demo and later replaced (to the chagrin of some fans) by Office co-creator Stephen Merchant.

"His sessions happened in the last year-and-a-half in development," Wolpaw said. "But people liked Richard Lord's audio so much that when we finally got world-class comedic actor Stephen Merchant in there, there was a small but vocal minority of people who were livid. They wanted Richard back."

It's kind of a "microcosm of sequels," Wolpaw observes, a representation of fan's occasional (and often) fleeting unwillingness to embrace the new, no matter how delightful it might end up.

Though some features transmogrified (as in the case of Lord and Merchant) others were left behind all together.

Such was the fate of what the team jokingly referred to as "The Morgan Freeman sphere."

"He had been in this room for centuries, so he was incredibly wise -- but only about the 20 by 20 space he had lived in," Wolpaw recalled. "So taking him out kind of blew his mind."

A competitive multiplayer mode (a combination of Portal and late 80s Amiga hit Speedball) was, in Wolpaw's words "no fun and way too chaotic." 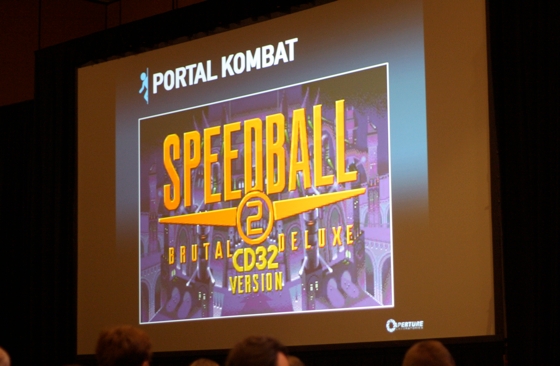 "The only good news is that we realized that fairly early, so we could direct our resources to the rest of the game."

But perhaps the greatest casualty of development was Dorfeldt.

In the original version of the game's two-player mode, GLaDOS had become frustrated testing on the too-robotic robots that star in the cooperative levels. So, she sent them looking for human artifacts.

One was a comic strip tacked to a long-abandoned cubicle starring Dorfeldt, who … OK, was basically Garfield.

Of course, when GLaDOS saw the strip (the handiwork of web comic creator Anthony Clark) she didn't see the humor and refracted it through her own homicidal lens in this "reworked" version.

Perhaps all is not lost for Dorfeldt. As Wolpaw and Faliszek reminded the audience, ideas left behind can often show the way forward.

In the game's original ending, Chell was required to say one word that would end Wheatley's reign of terror and restore order. In practice, the player had only to left click and make Chell say "Yes."

"Chell's gonna say one word and that'll be the end of the game and it's going to be 'yes,'" Wolpaw said with mock enthusiasm before Faliszek added " … and boy did that suck."

A more fitting end was, ironically, found in a handful of jokey fake endings Valve had abandoned.

"Chell would die and a song would play. There was one about two minutes into the game, and the song was basically a recap of everything that happened in those two minutes," Wolpaw recalled. "In another, you could teleport yourself to the moon and Chell would be asphyxiated and you'd hear a sad song about the moon."

The perfect way to end was as close as the cutting room floor.

"Someone made the connection that we could resurrect the moon bit for the ending," Wolpaw said. "We could send Wheatley to the moon. It was this perfect mix of totally awesome and completely stupid."