Fallout: The game that almost never was

Fallout, called "too depressing," was considered a risk in 1997 and was almost cancelled twice.

Share All sharing options for: Fallout: The game that almost never was

Speaking at GDC 2012, Obsidian Entertainment's Timothy Cain calls Fallout "the game that almost never was." The innovative post-apocalyptic RPG started life as a skunk works project Cain tinkered around with alone in his office. It became a franchise and an inspiration. It was almost cancelled twice.

Cain, working at game development studio Interplay, created the engine and most of the design for the game that would later spawn three direct sequels. He worked on it, by himself, noodling with the mechanics of the design and incorporating a then-popular pen and paper role-playing system created by Steve Jackson called GURPS. Later, Cain enlisted help from fellow employees at Interplay who would work with him on the game in their spare time.

Cain says producers on other Interplay games would get mad because he was distracting people from working on their games. But from the beginning he says that everyone involved knew they were working on something special.

The story of Fallout is a classic example of a new idea nurtured by a small, dedicated team working against seemingly insurmountable odds.

For six months, starting in 1994, Cain built the engine alone. He was given no money and no resources — only time — to devise what would become the backbone of Fallout.

Then he got a writer. Then an artist.

"Life is cheap and violence is all there is."

Then, slowly, over the course of the next three years, Cain assembled a team of 30 who, over pizza on late nights, built what would become one of the most influential games of its time, and one of Interplay's best-loved hits. Quality Assurance testers worked for free on weekends.

Fallout, considered a "risk" by Interplay, became a hit, leading to creation of three direct sequels including Bethesda's smash hit Fallout 3, one of the best-selling games of 2008 and winner of "Game of the Year" at the 2009 Game Developers Choice Awards. Success due in large part to the vision and style of the original game.

Early in the development, team member Chris Taylor put into words what they were trying to accomplish with Fallout. His "Mission Statement" document is now legend among Fallout developers, and Cain cites it as a major reason why the game came together at all.

"This is the wasteland," wrote Taylor. "Life is cheap and violence is all there is."

At one point during development of Fallout, Cain says Interplay marketing tried to warn him that the game would be too depressing. Cain would remind them: "everybody is dead. It's supposed to be depressing."

Cain says the game was designed as a top-down experience, not just a game. Every element of the product was intended to enhance the feeling of immersion in the Fallout world, from the packaging which was envisioned as a lunchbox you would find in the game world, to the Interplay logo the team created form scratch, to the manual which was written and designed as if it were given to you as a vault dweller preparing to venture into the wasteland. 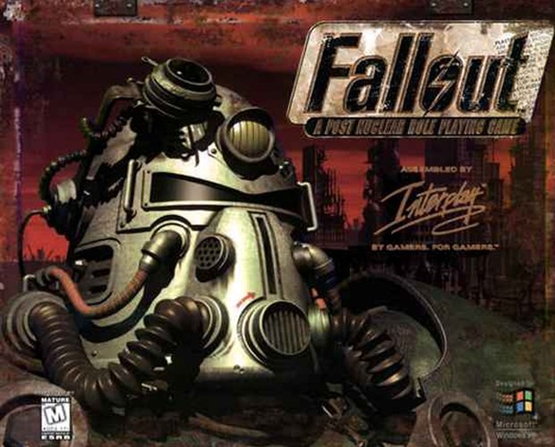 The "Fallout style," however, was heavily influenced by late Atomic Age literature and media. Cain lists, among the myriad influences on Fallout, such movies as Mad Max, A Boy and His Dog and Forbidden Planet. The idea of an underground vault actually came from the Don Johnson film, A Boy and His Dog, which features an underground base that Johnson and his telepathic canine friend must penetrate. While the goofy, 50s-era look and feel of Fallout's "advanced" technology was inspired by the space opera Forbidden Planet. Cain says he wanted robots in Fallout to be like Robbie the Robot, not like the Terminator.

Interestingly, the post-apocalyptic theme wasn't Cain's first choice for what to do with his new game engine. He says his first idea was to make a fantasy game, just like everybody else. His second idea: time-traveling dinosaurs. Players would travel through time, fly into space and rescue the girl. It's shocking now to hear, but this concept actually gained a lot of traction before Fallout developers decided to shoot for the apocalypse.

The name "Fallout" was also a late development. Cain says he and the rest of the team favored the much more descriptive title "Vault 13," but this was nixed by marketing, who instead wanted to call the game Post Nuclear Adventure. Cain credits Brian Fargo with the idea to call the game Fallout. According to Cain, Fargo spent a weekend with an early build of the game, then, on Monday dropped the disc on Cain's desk and said "You should call this Fallout."

Almost fittingly, the Fallout team was forced to fight for its survival. The now-legendary game was threatened with extinction on three separate occasions and saved only through extreme effort on the part of Cain and his crew. And in one instance, he actually had to beg.

The first threat to Fallout's existence came when Interplay acquired the licenses to the Forgotten Realms and Planescape Dungeons & Dragons franchises. The studio immediately began planing for a raft of D&D inspired games utilizing these popular worlds, and Fallout, then considered expendable, was put on the chopping block. Cain says he literally begged Interplay executives to give his game a chance and, shockingly, they relented. Development continued.

"Everybody is dead. It's supposed to be depressing."

The second threat came in the form of Blizzard's massively popular isometric, multiplayer, real-time RPG Diablo. After the release of Diablo, and it's immediate commercial success, Interplay execs began pressuring Cain to convert Fallout, which was designed from the ground up as a turn-based single player game, to multiplayer and real-time.

"That wasn't going to happen," Cain said. Instead, he again convinced Interplay execs to give his game as originally envisioned a chance. He said development on the game ground to a near halt as he and his team created feasibility studies and painstakingly walked Interplay through their vision for Fallout.

In the end, Interplay again relented, but Cain says it was not a sure thing. Diablo very nearly killed Fallout.

The final and perhaps most critical assault on Fallout came directly from Cain's original partner on the game system: Steve Jackson Games, creator of the GURPS role-playing system. Cain said that SJG couldn't et behind the ultra-violence and dark humor of Fallout and pulled out at almost the last minute.

Although Cain says the conversations with SJG and Interplay were "above his pay grade," the task of working around the sudden absence of GURPS fell squarely on his and Chris Taylor's laps.

Taylor was given a week to re-create Fallout's rule system, and Cain was given an extra week in addition to code. it. Cain says his memory of that period was very hazy, but he recalls a lot of late nights and "smelling bad." He says he doesn't know how they did it, but the meat of the Fallout skill and rule system was essentially created in those two weeks.

Although there were a number of problems with the game that Cain acknowledges are embarrassing (like the flaws in the follower AI that would cause them to repeatedly spray you with gunfire), the one thing Cain wishes he could take back was the decision to put a time limit on the original game's main mission., the quest for the water chip.

Cain says that this time limit was a bone of bitter contention even within the development team. He had intended it as a way of enhancing the urgency of the mission, but he admits that it prevented players from diving in to the world and experiencing it at their own pace.

Although the game was released with a time limit, it was removed in the first patch, granting players as much time as they wished to find that water chip. for some gamers, it's been 15 years.