Minh "Gooseman" Le shows off his first game since Counter-Strike

"Controlled chaos" is what Minh Le says he's aiming for with his new shooter, the seven-years-in-development Tactical Intervention.

The levels are close, almost claustrophobic, and littered with destructible, mobile objects that can explode or be used to impede or damage your enemy. Something as simple as kicking over a shopping cart can block an entry point, cause a distraction, shatter a glass window, send other objects flying through the air, or even injure a player in its path.

A round of TI looks as much like an action movie as a multiplayer shooter, with random explosions, shattered glass and bullets flying everywhere. Le says his goal was to create a game that was unpredictable, where no two rounds ever played out the same way.

"I just want to cause chaos and havoc," he said, sitting in a comfortable corner of the fashionable Samovar Tea House.

The Tea House, a favorite of GDC attendees, is full to bursting with videogaming luminaries. As we step out into the courtyard to record our video interview we pass by John Romero.

Le has a lot riding on the success of this game. He says he knows parts of it will need adjusting, and he's looking forward to receiving player feedback and using it to make the game better. In fact, as we were speaking about the game, he demonstrated his willingness to make adjustments based on user feedback by taking one of my questions and turning it into an opportunity for a bug fix.

Shooters are about shooting - anything else is boring

Le says his testers initially didn't know what to do with the ring. They were confused by the giant circle in the middle of their field of view, so he tweaked it to make it more transparent and to disappear at key moments, such as when you are shooting or lining up a shot.

When I asked if the transparency would be adjustable, Le replied it wasn't, yet, but that he could maybe hack that in. He then said he probably would, and I could see the wheels turning.

The Awareness Ring is exactly the sort of development that could make TI a must-play for shooter fans. As opposed to seeing enemy positions at a glance, while moving your attention away from the center of the screen, it allows you to instantly and continuously be aware of what is happening around you. Enemies appear as red dots on the ring, and friends appear as green dots. Silenced weapons allow you to disappear from your enemies' ring entirely.

We saw three levels in the brief gameplay demo. The first, a subway, featured hostages held by terrorists in a stopped train car. The terrorist mission was to protect the hostages and prevent them from being rescued or killed. Ending the level with all hostages accounted for earns the terrorists the most points. On the counter-terrorist side, the mission is to rescue the hostages, and every rescued hostage awards the CTs with points and ammo.

Editor markup for Tactical Intervention Screenshots. This is only visible in the story editor.

This hostage/rescue theme was also the format of the second level we saw, set in a rooftop penthouse. In both levels, CTs must assault the structure and Ts must repel them. Both maps provide a variety of access points and defensible positions, but mini-firefights break out continuously during the demos in smaller rooms, hallways or inside the train car.

The third level we saw, however, is what will most likely be the breakout for TI. Le says he wanted to build upon the VIP levels in Counter-Strike, which many players found boring. HIs solution: a firefight on wheels down a winding mountain road. One side must escort a VIP ensconced inside a vehicle down the road, and deliver him and his briefcase safely to the destination. The other side must stop them, using helicopters, stolen vehicles, explosives or anything they can get their hands on.

Le says the Source engine powering TI wasn't intended for vehicles, or multiplayer at all, so getting the vehicular firefight level to work was his biggest challenge, but it quickly became a favorite among his testers. It's not hard to see why.

While driving a vehicle, you can shoot with one hand while driving with the other, but your passengers can shoot too. And if your VIP dies, you can just take his briefcase. You'll earn fewer points, but you'l still be able to end the mission and have fun. Even if you get your tires shot out, you can replace them on the side of the road, or steal a new vehicle and keep going. 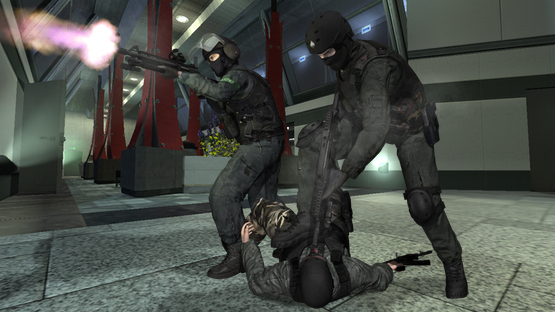 Above all else, Le wants to remove impediments to fun in TI. He says that shooters are about shooting, and that anything that removes the player from the shooting experience is boring and breaks the game.

He also thinks players deserve a "second chance" to get back into the fight in situations where, in other games, a stupid error or a lucky grenade would have knocked them out. In TI, grenades don't kill instantly. Le says he hates dying a thousand times in games like Call of Duty just because a grenade went off near you. He wants players to be able to have fun, even if they are a little harder to kill.

The Tactical Intervention closed beta starts March 16th, at which point TI will finally be in the hands of gamers outside of a small circle of testers, and Minh Le's works testing and tweaking will kick into a higher gear. If all goes well, he may be back at the Tea House for next year's GDC, but this time as just another game developer.