'Resident Evil 6' preview: Leon and Chris, together at last

Resident Evil 6 features three separate, intertwined story lines and the return of zombies when it hits in Oct.

Share All sharing options for: 'Resident Evil 6' preview: Leon and Chris, together at last

Resident Evil 6 teams up for the first time Leon and Chris.

If you can't decide who's the dreamier Resident Evil protagonist, Leon Kennedy or Chris Redfield, you're in luck: In Resident Evil 6 you get to play both.

Resident Evil 6 features three separate but intertwined story lines that collide for a dramatic conclusion in China as Leon, Chris and newcomer Jake track the source of the mysterious C Virus. Moreover, for the first time in series history, metro government agent Leon and rough-and-ready Chris will meet face to face.

When I asked Capcom representatives at the 2012 Captivate event whether or not the epic meeting would set off sparks, I was told "yes." But of what kind? Oh the suspense.

"Zombies are back," Resident Evil 6 executive producer Hiroyuki Kobayashi announced, in Rome. They are caused by the C Virus, which animates the dead, renders the living into shambling blood suckers and creates all new enemies: the J'avo (pronounced (joo-ah-vo). J'avo are smart, and can run, jump, leap over obstacles and mutate when attacked. Attack an arm, that arm mutates. Attack a head, and again: mutation. The goal is for an encounter with J'avo to never play out the same way twice, making them unpredictable and challenging.

The "never the same twice" theme resonates deeply in RE 6. Director Eiichiro Sasaki says the goal was to create a game world that would be horrific and suspenseful, and would surprise the player at every turn. Chandeliers fall unpredictably from the ceiling in one area, an abandoned banquet hall, as Leon Kennedy searches for a missing girl. Sasaki says that different events may transpire in that same location if visited again.

I cringe as I write this, but it's true: she has a secret of her own

Players will have a choice of three protagonists in RE 6. Each has a unique storyline, a partner who helps them in their adventure (and who can be played by an online or offline co-op partner, or left to the game's AI) and their own individual graphical HUD. The three main stories can be played in any order.

Leon's story begins as he must put the President of the United States out of his misery after the prez contracts the C Virus and turns into a brain-eater. And that only sounds like a spoiler. That's just the game's first few minutes. Leon will then pair up with sexy Secret Service agent Helena Harper, who (I am cringing as I am writing this, but it's true) has a secret of her own.

Chris Redfield's story begins prior to the C Virus saga, while he is working as a BSAA agent overseas with his sniper brosef Piers Nivans. According to the RE team, Chris experiences a life-altering tragedy which changes the way he sees the world. He will eventually come face-to-face with Leon, marking the first time these two iconic RE protags will have ever met in the same game. Whether there will be fisticuffs or man hugs has not yet been announced.

The third protagonist, Jake Muller, is an all-new character, but one with deep ties to the series. Jake's father is Albert Wesker, one of the main Big Bads of the RE series, who's responsible for disseminating a variety of viruses in various games. Muller pairs up with Sherry Birkin, of RE 2 fame. Jake is described as a hard-nosed mercenary, whereas Birkin is a soft-hearted idealist who hires him to get her out of the Eastern European country of Edonia. Sparks ensue. 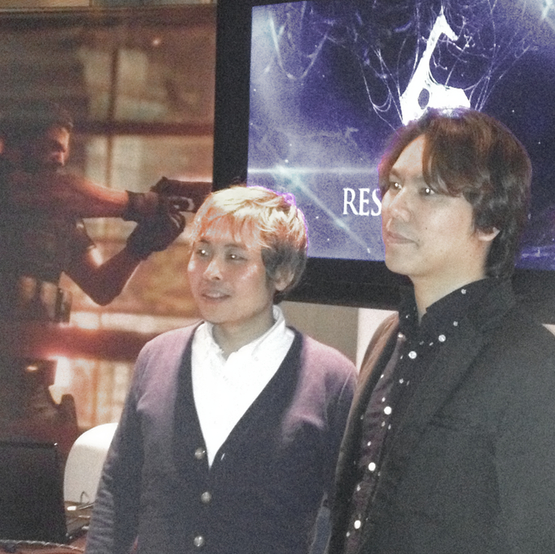 Players may go it alone and let the game's AI handle their partner/love interest's duties, or they can team up with a real life friend either online or via split screen co-op. Unlike in RE 5, friends can join your game at any time, without the need to track back to a checkpoint. Players may also move their HUD display form right to left to make keeping track of who's who even easier.

While the perspective is once again third-person, with the protagonist's backside occupying a generous percentage of on-screen real estate, Capcom insists that this Resident Evil will be easier to play than past games. Sasaki says the goal was to create a control scheme that would be "stress free" saving the horror for the story. Players will be able to run and shoot simultaneously, and perform special moves, like rolling onto your back and shooting up at lunging enemies.

During the demo, it appeared that the camera control was largely in the hands of the player, although the game would take control of the camera and pan or focus on scripted cinematic events. Certain actions, like stacking up beside a door, or interacting with in-world objects, would also instigate a camera change and animation. On the whole, however, it did look like serious effort had been put into making RE 6 play more like a shooter than an arcade gun game. We will have to wait until we have hands-on ourselves before making a final judgement.

What is clear just from looking at the game and watching a very brief segment of play is that this time around the focus is most definitely on the suspense side of horror, eschewing the adrenaline-fueled panic of the last two installments. For large stretches of the demo, Leon and crew moved through darkened, silent corridors. The action, when it happened, was intense and sudden and largely unexpected in spite of the build-up.

the release date for Resident Evil 6 has been moved up from November to October 2nd, 2012.

Loading screens appeared to be minimal and the saving appeared to be handled by automatic checkpoints, although the demo appeared to be running on a developer's laptop and not a console, so we will need to reserve final judgement on both of those aspects until we can see the game running on retail hardware. What we can tell you now is that green herbs are also back, and can now be formulated into green pills and eaten at any time with a single button press. Thus proving that even though some things about Resident Evil may be changing, others will always be the same.

Capcom recently announced that the release date for Resident Evil 6 has been moved up from November to October 2nd, 2012. The game will be available for PS3 and Xbox 360. More details are expected to emerge at the 2012 E3 expo, and Polygon will be there.