Neither Frobisher Says nor Paint Park have release dates for North America, but it will be soon, Sony says.

It's like Simon Says, but mixed with the dash of WarioWare's bizarre sensibilities and a lot of dry British humor.

Frobisher Says, a mix of silly, wry mini-games for the PlayStation Vita, is coming to North America soon for free, Sony officials said today. Vita owners will also soon be getting Paint Park, a free app that turns your Vita's touch screen into a pad of paper for doodling, messing with pictures or competing against friends in drawing contests.

Neither free Vita app have release dates yet, but should be out soon, officials told Polygon.

The more robust app of the two is Frobisher Says, a collection of more than two dozen silly mini-games that has you at times using the Vita's touch-sensative surfaces, cameras and motion detection. While it feels a bit like an app designed to get gamers used to the many ways they can play with a Vita, it's sense of humor and eclectic art styles turn the experience into something that is much more mini-game collection then Vita tutorial.

In my few minutes with the game I was asked to rain on a parade by shifting a cloud over an animated parade by tilting the device, help a girl sneak past a monster with the back screen touch panel and "Squash the Toffs" by squeezing the virtual clay heads of English men in hats between two fingers.

The game, developed by Honeyslug, cheers and jeers your successes and failures in a British accent and wraps the short session up with a score that can be uploaded to leaderboards.

A Sony spokesperson told me that there are plans for relatively inexpensive add-on packs of new mini-games for the collection in the future. 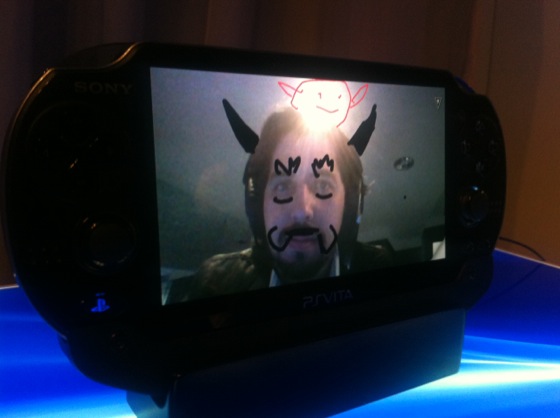 Paint Park, also free and set for a "soon" release date, is a relatively straight-forward drawing app that has you use the touch screen to drawn whatever you'd like on a screen-sized piece of white paper. Tapping a corner of the screen brings up options that allow you to add photos, change colors and change brushes. One neat little touch pops up a magnified view of where your finger is placed on the screen in one corner, to make drawing more carefully easier. A multiplayer version of the game adds a mode that challenges players to draw a pre-determined object and then compare how each player did and vote on a winner.

While neither experience was a game changer, it's nice to see that Sony is still dropping apps, especially free apps, into the PlayStation Store for the Vita.