'Max Payne' for iOS: Does it work on a touchscreen?

Bullet Time At Your Finger Tips

Share All sharing options for: 'Max Payne' for iOS: Does it work on a touchscreen?

Can twitch-based shooters work on a touchscreen? The best we can say is "almost." Precise movement, aiming and firing on a touchscreen is little more than a pipe dream, which is why it came as shock that Rockstar was going to attempt to bring Max Payne to mobile devices. And so they have, launching Max Payne Mobile on iOS platforms earlier today. But have they found out a solution to the dreaded touch screen input issues? Once again, "almost."

Can twitch-based shooters work on a touchscreen? The best we can say is "almost."

Precise movement, aiming and firing on a touchscreen is little more than a pipe dream, which is why it came as shock that Rockstar was going to attempt to bring the original Max Payne to mobile devices. And so they have, launching Max Payne Mobile on iOS platforms earlier today. But have they found out a solution to the dreaded touchscreen input issues? Once again, "almost."

The controls are the most important facet of Max Payne Mobile as they're the single biggest change from the original, which most people played with a mouse and keyboard. On iOS, the controls are predictably touch-based, but Rockstar was smart to include a staggering number of customization options in the hope that players will be able to find something that works for them.

In the game, you can pick from a variety of auto-lock settings for targeting, or just stick with free look for a more traditional feel. You can move every input button to wherever they want on screen and even swap the aiming and movement sticks. You can change sensitivity or set it to jump every time you tap the screen. I spent a good hour finding settings that worked well enough for me.

The most impressive aspect of the controls is a recreation of mouse-look functionality. Other action games on iOS have tried digital analog sticks for aiming, but Max Payne Mobile's default setting is on mouse look, which registers even the tiniest bit of movement made by your thumb. It's similar to how a mouse would pick up even a millimeter's shift to the left or right. The implementation allows for some of the most accurate aiming I've ever experienced on the platform.

But there's a problem. Shooting. This is Max Payne after all, and you'll be doing plenty of shooting as he rampages throughout NYC. So imagine your hands on an iPad. You've got the left thumb handling all your movement and your right thumb handling aiming. So how do you fire? The only way is to tap the fire button, which means taking your thumb off the aiming button.

Here's the solution I came up with: I moved the fire button to the left side of the screen. This means I can't move and fire at the same time, but thanks to Max's signature Bullet Time dive, I don't really need to. Basically I dive, use my right thumb for aiming and my left thumb for firing. I've included a screencap of how my controls are set up so you can try it for yourself. 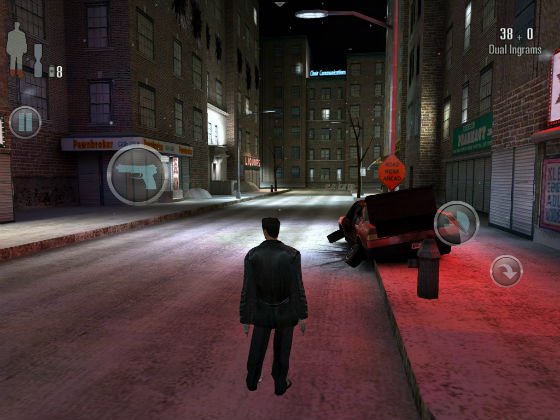 Is it ideal? No. But props to Rockstar for letting me find something that worked for me. And short of finding a way to add mouse/keyboard support to the iPad, I'm not sure I could offer up a better solution.

As for the rest of the game, it's a pitch-perfect port. Every level, every ridiculous piece of narration, every cheesy comic strip has been recreated with loving accuracy. I tested the game on the new iPad and it looks tremendously sharp, even if the character models and environments use the same blocky assets from yesteryear.

I do take issue, though, with the lack of Game Center support in Max Payne Mobile. Instead of Game Center, Rockstar has implemented is own proprietary Social Club, which has its own set of achievements, stat trackers and friends list. I don't begrudge Rockstar wanting its own service, but where's the harm in including Game Center support on top of that? For whatever reason, Rockstar has never supported Game Center with any of its iOS titles and it seems like a pretty big omission, especially given the amount of work that goes into their mobile ports.

Outside of that, there's not a whole lot to complain about. Max Payne Mobile is an impressive recreation of one of the best action games ever made and offers a nice prelude to the release of Max Payne 3 next month. That it's just 3 bucks for a Universal app is icing on the cake.