Handcrafted of sustainable walnut, cherry or maple lumber by a group of artisans in a Washington State workshop, these made-to-order tables can cost as much as $15,000. But it's not just the craftsmanship and design that attracts people to Geek Chic's furniture; it's the secrets of their creations.

Each of these specialized tables features a second surface tucked away under a removable tabletop that serves as the perfect playground for board games, role-playing games, miniature battles and, now, video games.

The "Game Vault" of Geek Chic's tables vary in depth, but are at least 2-1/4 inches beneath the top surface of their kitchen, dining, work and coffee tables. The floor of that vault can be lined with a game map, a playing board, a dry erase acrylic layer or even inserts made of velvet or LEGO. Their newest model, the Locus, has a 40- or 60-inch high definition, multi-touch LED LCD display tucked under its surface. Once exposed, the screen rises from the table on a piston.

"When you add something like this to your life it adds to the story of your life."

The idea for all of Geek Chic's creations is to make the hobbies of gamers, be they video gamers, pen and paper gamers, board gamers or wargamers, not just easier to fit into their lives, but something they can show off, said Geek Chic's Brenda Holzknecht.

Each piece of furniture created by the boutique studio can transform from something more ordinary, into highly personalized gaming stations. Tables can be designed with a special rail system running along the outside of the table that allows owners to attach wine glass holders, containers designed to roll dice into, and storage bins. Other tables include flip-down desks and secret drawers.

The process of ordering one of these tables is just as unique as the tables themselves. Customers are assigned furniture valets who walk you through the process, Holzknecht said.

That means finding out not only what sort of games you'll be playing, but where you live, whether you have pets or children and what your laptop habits are.

"We take all of that into account and assist you in getting the right combination for you," she said.

Because each table is made to order, based off the studio's nine basic designs, it can take weeks or months for a table to be built and shipped. That wait topped out at nearly a year-and-a-half shortly after Geek Chic opened its doors in 2008.

Holzknecht said that after making the rounds at several gaming conventions that year, the company's orders "exploded."

The company has slowly been expanding its offerings over the years, adding new table designs, other types of furniture like hutches and book cases, and even some fun non-furniture offerings like hand-made wooden weapons, wands and mustaches. (Created on a lark by someone at their studio, the mustaches have become a mainstay of their conference appearances.) 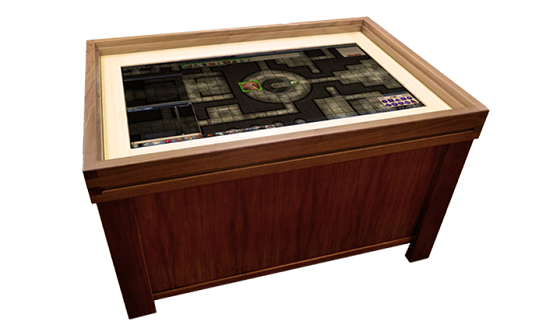 Geek Chic's latest creation, shown off earlier this month at gaming convention PAX East, is The Locus. Safely covered away, the Locus looks like a hefty coffee table, but removing the table top exposes a massive touch-sensitive LED-backlit LCD screen that automatically lifts out of the table with the press of a button, for play and viewing.

The Locus was created with the help of Mesa Mundi, a design and consulting company that specializes in touch sensor technology for surface computing. The screen can sense up to 12 simultaneous touches for use in playing games or object tracking. You can also plug a cable television signal or a video game system into the screen. The Locus' base price is $4,250 or $8,500, depending on whether you order a 40-inch or 60-inch screen, and it can be upgraded to be able to sense up to 32 touches at the same time.

Despite their plunge into electronics, and mustaches, weapons and wands, Geek Chic remains very much a dedicated furniture company that celebrates geek pride, Holzknecht said.

"When you add something like this to your life it adds to the story of your life," she said. "And it allows you to take pride in what your hobbies are."