BXX: Haunted is a 32-hour, non-linear mystery from the creator of Carnivàle

"you're lewis and clark, you're discovering it." Daniel Knauf, BXX creator

Share All sharing options for: BXX: Haunted is a 32-hour, non-linear mystery from the creator of Carnivàle

BXX: Haunted is a 32-hour-long non-linear movie designed specifically for the internet by the creator of HBO series Carnivale.

Six strangers venture into a soon-to-be-demolished house hoping to capture evidence of the spirits that supposedly haunt it. Wiring the house with sixteen cameras, the team is ready to catch any bump, any flicker that seems out of place.

When tragedy strikes, the footage of their 32-hour excursion lands in your lap, and it falls to you, the viewer, to comb through the nearly 600 hours of recorded and archival footage to piece together what, exactly, happened.

This is BXX: Haunted, and it’s unlike anything that has come before it.

The non-linear narrative is the brainchild of Daniel Knauf, best known for creating the HBO series Carnivàle in 2003. An early adopter of the internet, Knauf said he’d gotten frustrated with how other media he’d worked in had approached the new technology. 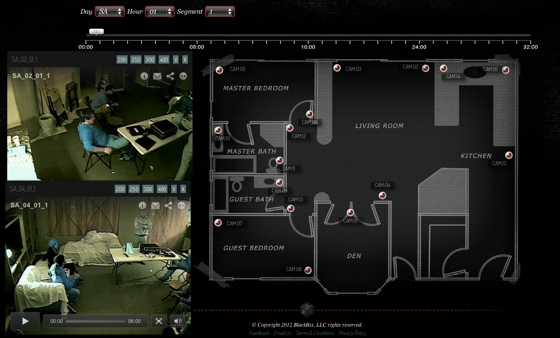 That narrative is BXX: Haunted, and those who start combing through its staggering amount of footage can skip to any moment in the 32 hours of footage, open as many different cameras as they like and basically ingest the story in any manner they see fit.

The resulting experience feels like the intersection of reality TV, Paranormal Activity, archeology and an FMV game.

"It’s hard to put a pin in it, because it’s so unprecedented," Knauf said. "The idea of non-linearity certainly has connections to the gaming world. There are other gaming aspects, where certain documents or diary entries are locked until you see certain scenes.

"It’s just so hard to categorize. It’s like, you go into the game store and there are all the boxed games, Monopoly or whatever, and then there’s a 1000 piece jigsaw puzzle of the Eiffel Tower. Is that a game? Not really, but where else do you put the jigsaw puzzle?"

Knauf is quick to point out though that his story shares little DNA with more distinctly "interactive" work like Choose Your Own Adventure novels or the interactive movies of the Sega CD era:

"With those, you can feel the machine, so it never feels satisfying from an emotional standpoint," he said. "They keep you on the beanstalk, making it look like the path is branching, giving you the illusion of choice while keeping you in the same direction."

It’s not a TV screen, you fucking idiots.

But offering players so much different content to sort through didn’t come without a price. Originally planned to be a 48-hour project, Knauf said he trimmed BXX: Haunted to 32 hours when he saw the emotional effect that staying in character had taken on his performers.

"I was watching these actors and starting to recognize signs of incipient trauma," Knauf said. "I was cutting huge sections out of Act 2, because I realized if we keep pushing these people, I’m not sure they’re going to come out of this house and participate in society for a while."

Viewers can skip ahead to see if they catch the hints of instability that so troubled Knauf or they can follow the journey of one character or just watch scene at random. Knauf says there’s really no right or wrong way to start uncovering the mystery.

"The only wrong way to do it is to sit there and be bored. Sometimes, you’re going to have a shot of an empty room for six minutes," Knauf said. "...Of course if you happen to watch all six minutes and something happens to materialize in the corner, you’re likely the first human to see that, other than the people who made it. I mean, you’re Lewis and Clark. You’re discovering it."