Your Vita's almost a phone now

Skype hits the PS Vita today as a free app in North America and the rest of the world on April 25.

The free app, which is expected to hit by 3PM Pacific today, will include a background mode that will allow users to received Skype calls during games, while using applications and even when the device is asleep as long as it remains connected to 3G or Wi-Fi, PlayStation officials told Polygon.

A pop-up notice alerts gamers when a call comes in, giving them the option to pause the game and take the call by pressing the device's PS button. Once a call is complete, the user can return to their Vita gaming or app. Games that disconnect from the Internet won't support in-game Skype calls.

"Our users appreciate being able to access Skype features wherever and whenever they choose," said Manrique Brenes, senior director, consumer electronics group at Skype. "With the launch of Skype for PS Vita, we are taking another step towards our ultimate goal of making Skype video calling available on every platform, all over the world, and meeting the demands of existing PlayStation users to offer video on a gaming console." 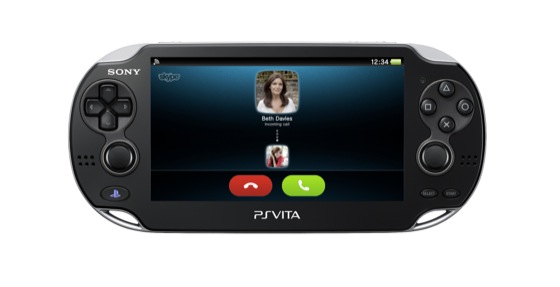 Brenes said that the app will be a 60 MB download and that Skype plans to continue to upgrade the app even after it hits the Vita, in part because not all Skype features will be supported at launch. For instance, the app won't initially support chat or SMS. It will support SkypeOut calls, though, allowing Vita owners to use their device to call phones as long as they have a connection.

"A lot of account functionality is not yet enabled," Brenes told Polygon. "We will continue to enable features."

Brenes says it's unlikely they will ever support in-game chatting, though.

"That's something we have looked at and tested," he said. "Our feeling is that when you have someone gaming, they really want the processor dedicated to the gaming experience. Skype would be a little bit of a load on the CPU."

The experience of Skype on Vita is much better than it was on the original Playstation Portable, he added.

"The experience on the PSP, we did that almost six years ago," he said. "We have learned a ton since. Skype running in the background is a big step forward for us.

"One thing that is difficult to convey in this call is the experience of using Skype on the Vita. It is one of the better experiences."

Brenes said that they've been working on the app for "somewhere between months and years" and that last year's purchase of the company by Microsoft never caused any issues.

"There was a special permission from Microsoft that we were going to continue to be a true multi-platform, multi-OS company," he said. "We are definitely committed to the Vita."

The addition of Skype to the Vita, especially the 3G Vita, brings the device one step closer to being a bit like a smartphone, something not lost on Sony Computer Entertainment of America.

"In terms of usage it is pretty clear we have been pounded on by users about communication and talking to their friends when they want to," said John Koller, SCEA's director of hardware marketing. "The most significant part of this news is the 3G connectivity. It kind of simulates the telephone experience."

The app hits the rest of the world on April 25th, Brenes said.

Update: Sony was true to its word: we've confirmed that the app is now live! If you're a Vita owner, head on over to the PlayStation Store to kick the tires on the latest addition to the Skype family for yourself.