Could this be Double Fine’s new adventure game?

A developer from 343 Industries - the studio behind Halo 4 - flagged the video in a tweet.

Share All sharing options for: Could this be Double Fine’s new adventure game?

Could this be footage from Double Fine's upcoming adventure game?

A video uploaded to Vimeo by Double Fine Productions showing concept footage from what appears to be an unknown adventure game has been removed from the site.

A developer from 343 Industries - the studio behind Halo 4 - flagged the video in a tweet, to which Double Fine boss Tim Schafer responded with "You imagined it!" 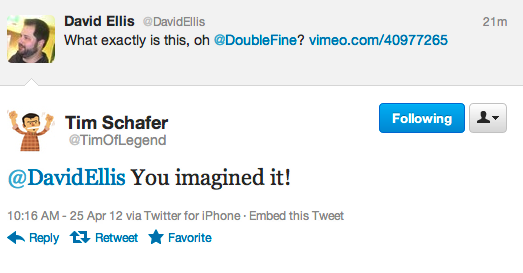 The video has since been removed from Vimeo.

The art is by Double Fine artist Lee Petty. Sources tell us that the images do not represent final art and Double Fine is still in the process of defining the game's visual style.

Double Fine broke a Kickstarter record when its funding page raised $3,336,371 for a proposed adventure game. The studio had set an original funding goal of $400,000, which was met in less than 12 hours.

We will update this story as more information becomes available.

[UPDATE: The video that was removed from Vimeo is viewable below. Thanks SpecialAgentSteve!]