True to its roots, 'Max Payne 3' remains a game about Max

Fans of the series will find a lot to love in this sequel.

Share All sharing options for: True to its roots, 'Max Payne 3' remains a game about Max

When things go sideways, as they often do in games with guns, Max Payne 3 is a sublime experience.

The game pushes you to push Max, to ignore the overwhelming odds, to leap guns-first through massive windows, down steel bleacher steps, across the gulf between rooftops, and always into a whirlwind of bullets.

Absorbed by all of that cinematic gunplay, those flying bullets and the cacophony of metal jackets skittering across the floor, it's easy to forget what separates Max Payne from all of those other shooters. This isn't a game just loaded up with blood and bullet time. What really adds weight to the experience is Max Payne the person, a broken, whiskey-guzzling drug addict who is as much running from his past as he is toward his certain, bullet-riddled future.

Max Payne 3 feels like a game that doesn't just remember Payne's past, but wants him to answer for it.

That might be why Rockstar Games invited Polygon to their New York City offices last week to view the game's cinematic opening and play through three of the Max Payne 3's early levels.

Max Payne 3 feels like a game that doesn't just remember Payne's past, but wants him to answer for it.

Max Payne is a series embraced for a myriad of reasons and Rockstar wants to make sure that people take the time to notice them all. And they should.

It's the first thing we hear: The mournful, familiar strains of a cello and then of Max Payne thinking to himself.

The inner monologue, and its scathing, self-hating tone neatly bring gamers up to speed, drawing out the things we should know about Payne before we become him. The new home in a tawdry apartment in Sao Paulo, Brazil. The drinking habit. The painkiller addiction. The memories of New York, of two names on one tombstone, of a murdered wife and newborn child.

The scene also shows off the new look of not just a heavier, more run-down Payne, but the way in which he views the world. The cutscene plays out from strange angles in the room, like viewed from the floor. The image jitters. Changing to double vision, then to three images overlaid when he says, "Let it go, seriously."

Bits of spoken dialog pop up on the screen.

The colors separate and glide back together as Payne wanders the room in an old undershirt thinking to himself about his painful past. The screen flashes momentarily to show us what a younger Payne might look like in this same scene, shaved, hair combed back, wearing a familiar black leather jacket.

"What do I have to lose" he asks during that momentary relapse to his younger days, "besides the weight?"

And then he's back. He's drinking Kong whiskey. He's falling to the ground weeping. 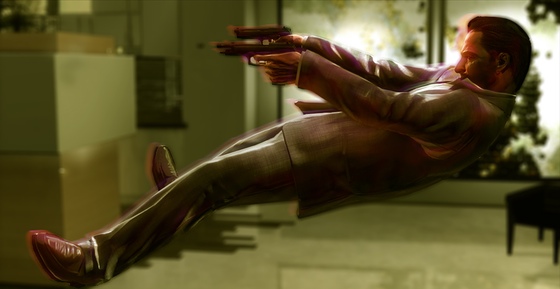 We don't get to play the game's first chapter, it's too loaded with spoilers for us to write about anyway, we're told.

The second chapter kicks off with Payne back in his apartment, drunk, vomiting in a sink. Payne staggers to a bed, the camera closes in on the fan above, and then flashes to the whirring blades of a helicopter.

Inside, Payne is riding with two women and a man as we fly to the rooftop of a very upscale Sao Paulo nightclub. Payne's there to protect them, but he's not happy about it.

The game uses cutscenes and dialog to walk players right up to the action. The story is clever, noir writing that fans of the original Max Payne will find familiar and satisfying. Those scenes also provides seamless entry into the action of the game. Those blood baths, that bullet time and all of those beautiful, cinematic kill shots.

This game has no loading screens. There's no downtime, only a clever balance between over-the-top action and gritty storytelling that occasionally dips into the pit of Payne's soul

We play through the entire second chapter, blasting our way through the armed thugs that invade the night club, chasing them to the rooftop and a fantastic culminating moment that leads to another flash to Payne's apartment and then an office. The scenes cut quickly, tell the story and push you forward, directly into the gunfire.

As with every Max Payne game, this one is really a game about Max.

Chapter three opens in a mammoth soccer stadium. Here we have to confront not just enemies of the caliber of the second chapter's thugs, but a more aggressive, more organized and much better armed paramilitary group. The game's difficulty ramps up smoothly, but quickly. Soon it's impossible to take on the game without leaping from bullet time moment to bullet time moment. Painkillers don't just heal Payne, they save his life, giving him a chance to find the person who fired a fatal shot and kill him. If you succeed, Payne lives, if you fail he dies and you have to backtrack.

By this third chapter we start to notice that the game has changed the way we approach shooters. Cover, when it's available, is just a place to wait to die. These hiding spots are invariably chewed away by gun shots and almost always give your enemies time to regroup and flank you. The only way to succeed in Max Payne 3 is to scramble and dive, to bullet time and clear a room.

Chapter four is a welcome surprise, a playable flashback to New York, a shoot-out backstory that explains why Payne isn't in The City anymore and how he got into private security.

Large chunks of time have passed between the culminating events of Max Payne 2 and these New York flashbacks in Max Payne 3, we're told. But it still feels nice to visit the old settings and then tear them apart.

Our time with the game gave us a chance to see how it flows, how narrative and gunplay wrap so neatly together you get lost in the storytelling and the life taking. It also was a reminder that as with every Max Payne game, this one is really a game about Max.