Max Payne is a functioning alcoholic and drug addict

Share All sharing options for: Max Payne 3 is a character study shaped by addiction and violence

Max Payne 3 is a character study about a damaged, addicted ex-cop

The music overwhelms. The lights are so white they bloom and bleed together. Colors separate, glide apart to form double, triple visions of the same scene. Max Payne needs a drink. Max Payne needs a pill. Max Payne can't cope without a glass bottle in his hand, or a plastic one in his pocket.

The latest game from the people who created the rich, wide-open world of Grand Theft Auto is a comparatively singular experience, the story of a man whose wife and daughter were killed, who has taken hundreds of lives and who survived so many shootouts with a seemingly endless supply of painkillers.

Max Payne 3 is, in the vernacular of video games, a third-person action shooter, but in the hands of Rockstar's deft artists the game approaches an interactive character study, an antidote to the consequence-free, non-reality of most video games.

Max Payne is a functioning alcoholic and drug addict, a byproduct of all of those lives lost in previous games. This sequel doesn't just remember that, it embraces it. 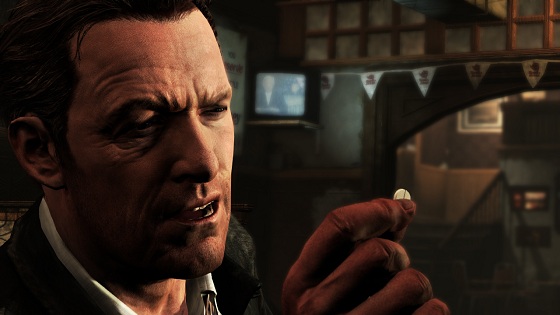 At first glance, Max Payne 3 may look familiar to fans of video game shooters. You play as a solid, gun-toting ex-cop shooting it out with a bunch of bad guys in a variety of settings from the alleys of New York City to the favelas of Sao Paulo. But everything from the deep narrative to the stunning visual effects of the game were informed by Payne's dual addictions to painkillers and alcohol, said Dan Houser, vice president of Rockstar Games.

"From a narrative standpoint, (addiction) is entirely central to the game - the story depends on it, and it is built into the story, and the entire flow of the game is built around it," Houser told Polygon. "From a visual design perspective, we wanted the visual effects to give the impression of a blurred somewhat hazy look that would give a sense of someone stoned on booze and heavy painkillers."

Even the game's notable use of bullet time is intertwined with his addictions, Houser said.

"We wanted Max's hazy drunken perspective to also feel vaguely similar to when he is in Bullet Time, as if Bullet Time, which is when he is at his best and almost super human, is also something of an addiction to him - like the moment when he feels most himself," Houser said. "It is playing the game (and the previous games) that has, to some extent put him in this state."

It is a game that weighs the violence of video games and dishes out real world repercussions to its hero.

Signs of Payne's clear addiction to both whiskey and painkillers are threaded throughout the game. The game's cutscenes often involve Payne with a bottle in his hand. We see him passing out. We see him waking up. He hallucinates moments from previous games, remembers himself as a younger, more fit, more hygienic Payne.

In gameplay the world seems constantly in motion, as if twitching around him. When he pops a painkiller, something he has to do to heal himself in the game, a fog seems to fall around Payne and the world for just a second, everything seems to dull.

The goal in creating the visual twitches, filters and effects of the game was to give the impression of a "middle-aged, functioning but somewhat addled drunk," Houser said.

While addiction is a cornerstone of Payne's character, Houser is adamant that's not what the game is about.

"In this game ... we are not tackling the issue of addiction, but we are looking at the character and actions of a man who has problems with substances, but also a lot of other problems," he said. "There is a subtle but important difference. It's a shooter about a drunk, somewhat morose, widowed ex-cop, trying to find some kind of peace with himself. It is not a game about the realities of being a drunk in terms of the need to drink. It is a game about being Max Payne." 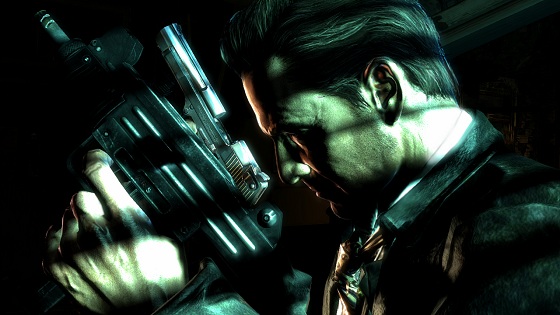 In layering a character study about a man warped by the violence he has both witnessed and inflicted, onto a violent video game, Rockstar has created something surprisingly complex.

"Flaws provide friction, and friction and conflict is what drives stories, so for us, it would be harder to make an interesting game about a more perfect person," Houser explains. "A man who has spent his life killing, even in the service of his idea of what is right or wrong, is going to be extremely damaged. That seemed the only way to approach this game and it is who this character is."

The end result is a game that weighs the violence of video games and dishes out real world repercussions to its conflicted hero.

"He wants to be a thinker but he's much better as a doer," Houser said. "When he thinks he gets wrapped up in himself or makes mistakes. When he acts, he is brilliant, almost super-human. That is his character, and the dichotomy between the two is the reality of his life, and at the heart of the game. He cannot seem to move forward emotionally, but physically he is relentless."