Borderlands 2's amazing weapons and their bizarre inspirations, from Apple to Austrian cars

Borderlands 2 is shaping up to be a richer, more colorful, more explosive version of the original.

Share All sharing options for: Borderlands 2's amazing weapons and their bizarre inspirations, from Apple to Austrian cars

Borderlands 2 is powered by eight gun manufacturer brands. These brands make the weapons cohesive, inspire the storyline and may help shape how some characters are customized.

While the upcoming Gearbox Software shooter has a multitude, nearly endless selection of weapons littering its landscape, they were each born from a meticulously-shaped design language. What grew out of that organic process of melding design influences from around the world and across the centuries was a carefully crafted set of eight brands, each tied to an imaginary gun manufacturer.

The branding of Borderlands and its munitions becomes all the more important in Borderlands 2 as those brands start to seep into the look and actions of enemies, storyline and, perhaps, even the way a player's character looks and behaves.

"We are definitely exploring ways to implement the branding," Kevin Duc, Gearbox Software's concept artist on Borderlands 2, tells me, repeating himself for the second time in two questions. He's dodging, he acknowledges, my questions about whether the game's heightened use of branding is going to bleed over into the way a character looks.

In the original Borderlands, players became accustomed to a spectacularly diverse selection of weapons, but the characters they controlled were missing even the most rudimentary ability to customize their look. Players could choose between one of four classes and then change their name and color of parts of their outfit. That was it.

I found myself in a level called the Wildlife Exploitation Preserve with a pre-made level 20 Gunzerker, a dual-wielding weapons master.

Duc is hesitant to tell me if players of Borderlands 2 will be able to change the look of their characters, or perhaps even augment their abilities, with an extension of the branding found in the game's weapons. What if, I ask, players could brand themselves with a weapon manufacturer and get a distinct look, ability or discount?

"You should come to our PAX East panel," he says smiling.

Zach Ford, senior designer on the game, gives me a bit more when I push him on character customization.

"That is unannounced right now," he says. "We're still thinking about it."

What Duc can talk about is how much more important weapons and their brands are this time around and why.

"We have internal focus groups that come in and play the game ... and tell us what they like and don't," he said. "One of the interesting things we've been getting back is even after an hour of playing the game they are able to identify a brand they like and describe it.

"That's been pretty exciting to hear."

In the world of Borderlands 2 there are eight weapons manufacturers. Each has a distinct look and feel. While the game procedurally generates the weapons players find, the developers used these brands, and their codifying visual rules, to make sure that weapons had one of eight cohesive looks.

Duc, who helped created the visual identity of each brand, walked me through the names and what they bring to the game.

The new Bandit brand, for instance, started out as a sort of home-made line of weapons.

"What does that look like," Duc said. "What does a psychotic bandit that is wearing huke spikes use for a gun?

"So we started looking at this Death Race, Mad Max style, bent quarter-inch steel, spikes, and developed a language on top of that."

The end result are high capacity weapons that feature box, drum or multiple magazines and a very home-built look.

The Torgue, a weapon that is all about explosives, started out with a single idea: A big, macho 1980s machine gun.

"We took that concept and we started looking at big beefy motorcycles," Duc said. "We started looking at engine blocks. We brought in some 1940s, 1950s aircraft design. Pulled all of these element in and made these huge beefy looking guns and then that influenced design back again and we ended up making those guns' unique ability explosives." 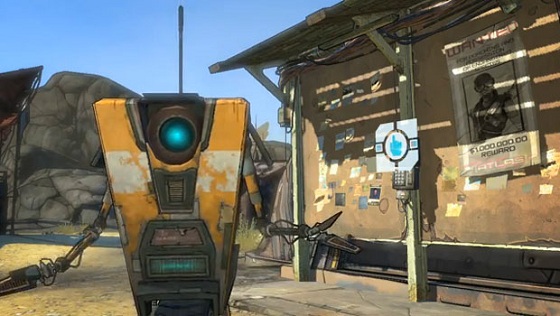 The Hyperion brand drew its inspiration from the Claptrap robot, a mainstay in both the first and second game. It was the robot that inspired the weapon's brand, Duc said.

Jakobs have a western influence and are accurate, high-damage weapons. Vladof is a Russian design, often with multiple barrels, that picks up its rate of fire the longer you fire. The Dahl focus on burst fire and accuracy and look very modern. Maliwan is meant to be the game's elemental weapons, inspired by high-tech manufacturing.

"I think one of the goals was to provide weapons so that every player can at least identify with one of them," Duc said. "If you are a big sci-fi fan you're going to play with Maliwan.

"Maliwan was our high-tech manufacturer. We took some Apple design influences, there was some Austrian car manufacturing that we looked at."

Duc said those influences are sometimes very subtle. In the case of Apple's influence, the developers looked at the sorts of materials to use and how shapes were put together. They tinkered with the different elements of the weapons' design to evoke a mood and a tone, he said. Then they shaped that into a gun.

"We wanted this throwaway manufacturer so we were looking at Bic razors and lighters and what do cheap Go phones look like?" Duc said. "How are those plastics used? Are they injection molded?"

Tidor, a favorite among several of the developers I talked to, are weapons that you throw away when you're out of ammo, instead of reloading. They act as grenades when you toss them. The missile launcher Tidor, becomes a sort of javelin on its toss.

The most difficult part of branding these weapons was then taking all of that design work and applying it to those procedurally generated guns, Duc said.

"We call that our modular gun system," he said. "Part of the difficulty is making very unique looks that work in conjunction with various parts. We kind of went really far and then pulled everything back in."

Designer Ford tells me that the vast array of weapons will also be augmented by E-Tech, a holdover from the original Borderlands' alien Eridian weapons. They will be a sort of barrel modification that works with all the brands of weapons now.

"It has its own characteristics per weapon class that players will discover over time," he said.

The result are weapons that can sometimes become the most important part of the game. I spent an hour playing a pre-alpha build of two sections of Borderlands 2 and it felt very much like the original Borderlands game: light on narrative, heavy on gameplay, gunplay, weaponry and captivating imagery.The game carefully retains its unique concept art look: a mashup of animation styles that include heavily inked borders, fidgeting textures and a surprising use of straight-line hatching.

I found myself in a level called the Wildlife Exploitation Preserve with a pre-made level 20 Gunzerker, a dual-wielding weapons master, and a Siren, who has the new ability to temporarily capture enemies in a bubble of space. Cooperative play, something the developers say they've been working to make better, was as enjoyable as with the original game. The missions of the relatively brief snippet of gameplay came to us from an in-game character though, if a player grows impatient listening to their task, they can walk away and continue to hear over a radio what they're expected to do. A nice touch.

Duc had said that this time around the developers made sure to push the color palette of the game's levels.

"Where Borderlands 1 focused on that arid desert environment, lots of brown tones, we have introduced just a broader spectrum of spaces to explore," he said. "We have arctic areas and glaciers. We've got tundra. We've got grasslands, like Scottish highland style areas."

True to his word, the level was a mix of blues and greens and, once I started blasting my way through the section, lots of red.

Hidden away in a back area of this demo level was a weapons cache placed to allow previewers a chance to grab some easy high-level guns.

My box included a doozy. A massive Maliwan weapon that slowly expanded like an alien flower as it discharged its glowing shots and then gently folded into itself as it reloaded.

A Gearbox employee standing behind me marveled at the weapons. He spends the day, he said, looking over the shoulder of players trying to see if he can find a weapon he's seen before. So far, no luck.