The sweet-spot is somewhere between Castle Crashers and the original Double Dragon.

Share All sharing options for: Double Dragon Neon is a little too faithful for its own good

Double Dragon Neon is a bit clunky for a modern brawler.

The problem with revisiting classics is that the memory of playing a game can sometimes be better than the actual experience.

That's certainly a bit of the case with Double Dragon Neon, developer Wayforward Technologies' modernization of the classic 80s arcade beat-em up.

While the game's over-sized, over-colorful characters don't look the part, the mechanics and gameplay of Neon can be agonizingly familiar in places.

In particular that game's surprisingly slow character movement, a speed considered slow next to today's brawlers.

The early build of the game, playable on the PAX East show floor this weekend, is still very much a work in progress, Pete Rosky, associate producer at publisher Majesco, told Polygon.

"Castle Crashers is what gamers expect now," he said. "We want to find the sweet spot between that and the original Double Dragon."

Right now the game moves a little quicker than the original, but it still feels slow, a sentiment echoed by several of the gamers checking out the title on Saturday. 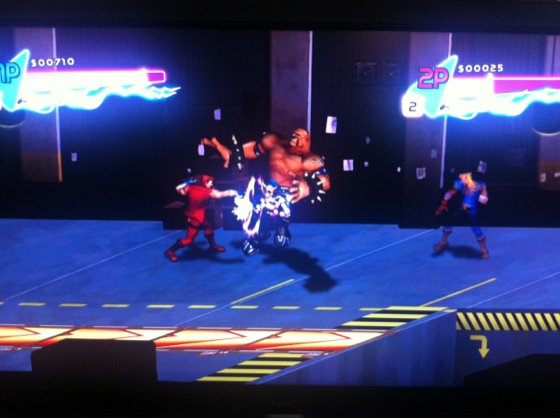 Fortunately, it also feel very smooth and the same, odd, art styles, and stuck-in-time design choices help make up for some of the titles other pitfalls.

Rosky said that the developer's goal is to continue tweaking content, speed up the game play and maintain the game's "smooth feeling."

The game is due out on the PlayStation Network and Xbox Live Arcade this summer.