What does this 11-foot Aliens statue have to do with Mercedes, Renault and Peugeot?

Share All sharing options for: What does this 11-foot Aliens statue have to do with Mercedes, Renault and Peugeot?

They design the sweeping interior contours of luxury private jets, bring to life concept cars from Europe's most famed automotive manufacturers and, as of last weekend, create a towering edifice to one of science fiction's most memorable standoffs.

Looming 11-feet above onlookers and weighing in at just under 1,800 pounds, Style & Design's Aliens: Colonial Marines statue reimagines the moment in James Cameron's Aliens that people recall most vividly: The carapaced body of a Xenomorph clambering up the steel exoskeleton of a power loader, its teeth inches from Sigourney Weaver's face.

Only this time, the people recoiling from the expected snap of the alien's pharyngeal jaw are from the long line of convention goers waiting for a chance to take a picture inside the structure.

"Our core business is making mock-ups and show cars for the automotive industry," said Xavier Carpentier. "For the last three years we decided to diversify in other industries, including the game industry because we think we can manufacture for everything. The idea was to take out the pixels from the screen and make it real."

Three months ago, game publisher SEGA began searching for a company that could create something they could use during video game conventions to promote their upcoming game Aliens: Colonial Marines. It found Style & Design and gave the France-based shop a chance.

"At first it felt a little risky, but once these guys got into it was like, ‘Man these guys are the best,'" said Randy Pitchford co-founder of Gearbox Software, the development studio behind the game.

Using the game's graphic engine, Gearbox created a virtual 3D model of the scene: An empty power loader weighed down by an attacking Xenomorph. The design company then took that information and a team of about ten figured out how to engineer it in a way that would make the most sense for what they wanted to deliver.

"We wanted to make it possible for the game to come out into real life so people can enjoy it," Carpentier said. "The hard part of it was how to make it, how to make it safe, stable, how to ship it, the maintenance; that's a lot of engineering." 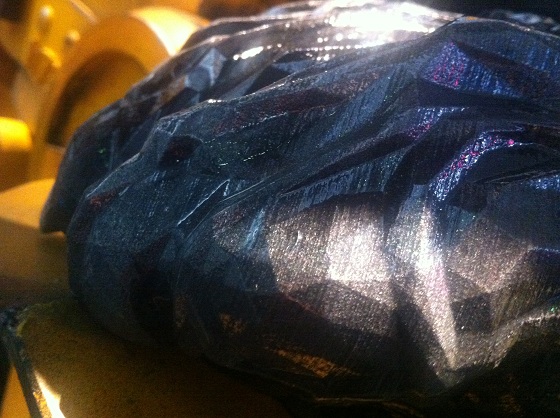 A closeup of the Alien's toe. Note the polygons.

In the end the design company created the structure in parts out of wood, steel and with a lot of layered 3D printing. The roughly 100,000 Euro sculpture took about eight to nine weeks to complete. The end result is a structure that includes a massive podium with a built-in smoke system, sub-woofer and tweeters, a bright yellow power loader that a fan can climb into and a strikingly accurate model of a Xenomorph staring down at its prey.

Once inside the statue a 35-second sequence is triggered that plays a series of alien screams and sound effects while automatically snapping several pictures with a pre-mounted webcam of the terrified fan.

The statue breaks down into an assortment of power loader and Alien bodyparts that take eight to ten hours to reassemble, Carpentier said. The process includes strapping the hulking body of the alien to a forklift and gently placing it atop the power loader. It's a tricky operation that involves some delicate placement of very heavy pieces.

The design work on the finished product is astoundingly accurate. If you get close enough you can see the tiny polygonal shapes that make up the actual Alien model used inside the game. The first time Pitchford saw it, during last weekend's PAX East game convention, he was blown away.

"This thing is awesome," he said. "They killed it." 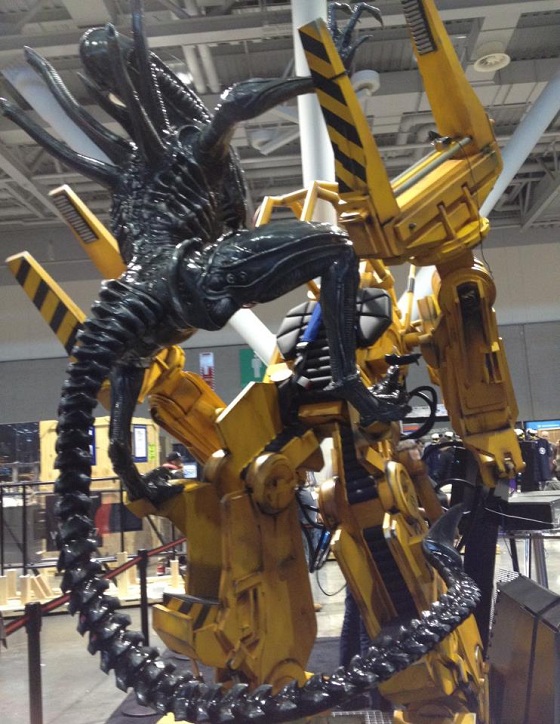 After the structure tours game conventions around the world Pitchford plans on bringing it back to his office, where he thinks it will just fit.

Carpentier spent much of the weekend pacing around the exhibit for the game and his company's creation, quietly watching fans climb up into the statue and feign fear.

"Our original business was making mock-ups for car manufactures like Peugeot, Renault and Merecedes," he said. "There are some things you can't tell from CAD data, you don't know how the sun will reflect on it, or how a like will look. At some point they really need to see what it looks like."

The same could be said of game makers and game players.

"When you play games it is cool, it is almost real, but it's not," he said. "We wanted to make it possible for the game to come out into the real world so people can enjoy it."