An entire Victorian steampunk fiction was created for this one scenario

There's a lot packed in to the upcoming Gods & Kings expansion for Sid Meier's Civilization V. Due out next month, the pack includes new units, buildings, wonders and civs. There is of course the addition of a new religion mechanic and a healthy rework of how diplomacy works.

But the main reason I was drawn to a meeting with developers Firaxis last week was to see just how they managed to squeeze the wonderful genre-mashing aesthetics and technology of steampunk into the series.

Slipped into the massive expansion are three new playable scenarios. One drops you in the middle of the decline of the Roman Empire, one during the Renaissance and one in a built-from-the-ground-up fictional Victorian steampunk scenario. 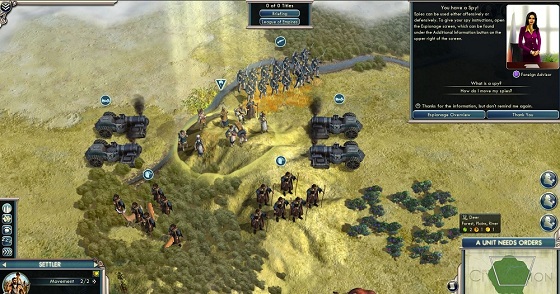 Smokey Skies drops players into a Steam Era showdown against four other civilizations and world leaders. The steampunk scenario has its own hinted-at backstory told through the details found in the Civilopedia for the five leaders and civs. The scenario also has unique units for both the Steam Era and the Airship Era.

Players can choose to build a tank-like landship, for instance, in the steam era. Or, once they hit the Airship Era, can fill their armies with Land Leviathans, Sky Fortresses and airships.

"They wanted to do something new and have a victory type that was different," he said.

In casting about for ideas and settings they quickly discovered that a lot of the folks at Firaxis were fans of steampunk, the genre that blends alternative history with science fiction, fantasy and sometimes a dash of horror.

So Strenger set about creating a completely new Victorian steampunk universe in which to place this scenario. 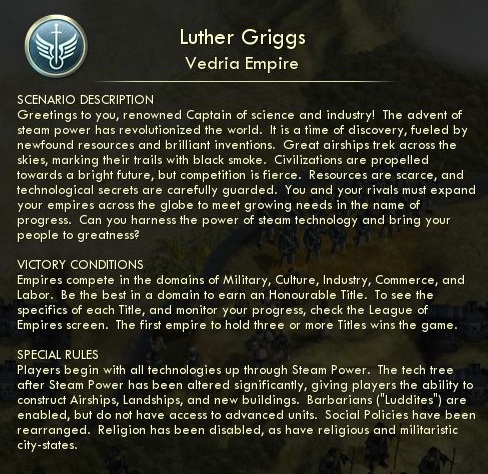 "Anton did all the writing himself," Shirk said. "He created custom buildings, new resources, new units. There are all kinds of hidden nuggets in the game."

The scenario starts at the end of the Industrial Era, breaking free of the game's traditional tech tree to push the game into this alternative history tech tree with its landships and airships.

"The big thing with this scenario is research control," Shirk said. "Without it you're not going to win."

The game's characters all deliver their veiled and not-so-veiled threats in a decidedly Victorian tone. The text-only messages appear under canvas paintings of the world leaders, mustachioed or with goggles.

Shirk says this is the most unique scenario the team has ever created, more unique even than the 1066: Year of Viking Destiny scenario released as part of a pack last year.

"One reason we do custom scenarios is because it provides a road map to all of our modders," he said. 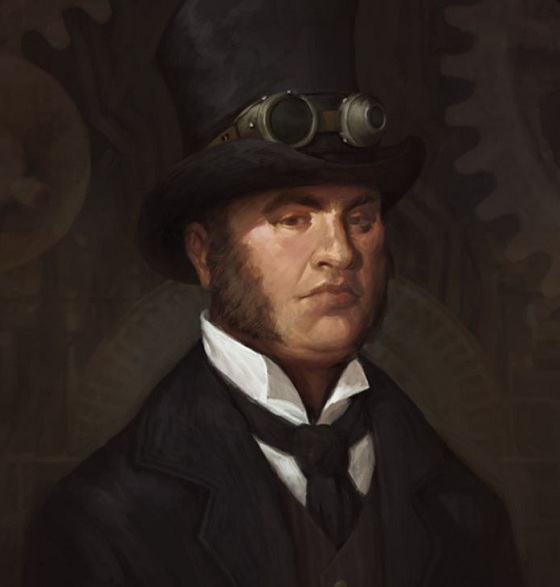 In this case, it shows how you can create an entirely new sort of civilization, new sorts of win conditions and even turn of religion, which was just added to the game through this expansion.

I played through an entire challenge earlier this week on an early press build and found the scenario fun, though perhaps a bit too narrowly focused. The win conditions and limited era selection means that matches will likely be over quickly and often won't entail much in the way of unit diversity. It was still a fun diversion from the sort of scenarios I'm used to running into in Civilization.

If you're interested in reading more about the Civilization V: Gods & Kings expansion pack, due out June 19, check out our in-depth feature on the game and the people behind it.

What happens to Bobby Kotick?