Share All sharing options for: The final, hopeful hours of République's Kickstarter quest

"Running this Kickstarter campaign has been one of the most stressful experiences of my entire life," says Ryan Payton, the developer behind start-up studio Camouflaj and (hopeful) video game République. "At one point last week I even noticed I was losing chunks of hair."

But that was last week. Today, less than 24 hours before the Kickstarter pledge drive ends for République, the finish line is within reach. For the first time since the project's inception, Payton says, even he believes that République's Kickstarter project can be a success.

"There's a lot of electricity running through the team right now," Payton said in an interview with Polygon today. "We haven't been like this since the David Hayter and Jennifer Hale announce last week, where we saw a huge response from the community. But I think last week taught us to be excited but not overly optimistic, because the pledges last week just flatlined, which I think hurt our morale a lot."

Payton says he and a social media manager have tried to "shield the rest of the team from the craziness of Kickstarter as much as possible" so it can focus on the business of getting the game made.

It was on May 3 when a new kind of "craziness" came to République's Kickstarter. On that day, when Payton and Co. revealed Hayter and Hale's involvement, 400-plus backers kicked in more than $55,000 in a single day, according to Kicktraq data. The game hadn't seen a spike in funding since late April, when Camouflaj committed to releasing République for PC and Mac platforms. On May 9, two days before the funding deadline, the project finally took off. Its funding has continued to surge today, the project's most profitable day yet.

"If I were to guess why we're getting a lot of traction this week, I think it's because we've been doing a big push to spread the word about the campaign and our situation," Payton said. "This was something I struggled with at the beginning of our campaign because of the huge time commitment doing Kickstarter is. Thankfully, Billy Berghammer approached us and offered to help out with the campaign, which has made a huge difference."

"I also think that with every single new pledge that gets us closer to our aggressive goal, it convinces even more people to pledge. Before, I think people didn't bother to pledge because they just assumed this wasn't going to happen. Now it seems like we're getting a lot of momentum because people want to get on this train before it reaches its stop."

"I used to consider myself an expert on Kickstarter until ours actually started and did very unexpected things, and now I'm done trying to predict it."

Backers had good reason to be wary of the game's chances. It was, after all, a project seeking a half-million dollars, bound for a platform powered by 99 cent games. This was not a game with the development pedigree of a Double Fine Adventure or the long-awaited hunger of a Wasteland 2, Kickstarter projects that were runaway successes. Payton places much of the blame for République's slow start on the funding goal.

"That [funding goal] surprised and upset a lot of people, and a lot of folks in the forums said we were crazy for even considering an iOS game that would cost that much to develop," he says. "This was disappointing to me, because in the world of game budgets, République is an absolute bargain, mobile or otherwise. And a lot of the most successful iOS games are costing seven figures these days."

That said, Payton doesn't believe Camouflaj would have lowered its lofty funding goal, even if it were given that chance.

"I think Kickstarter is all about transparency and honesty," he said. "And sure, we could have set our goal for $200,000 and we'd probably be further along than we are now, I'm guessing. But we don't need $200,000 to make this game on our own terms. We need $500,000. If we fail in achieving that goal, then that's OK because the community spoke and said that there's not enough people out there that believe in our vision and our reasons - and again, that's OK. I'd rather fail because we were honest than succeed because we set an artificially lower bar." 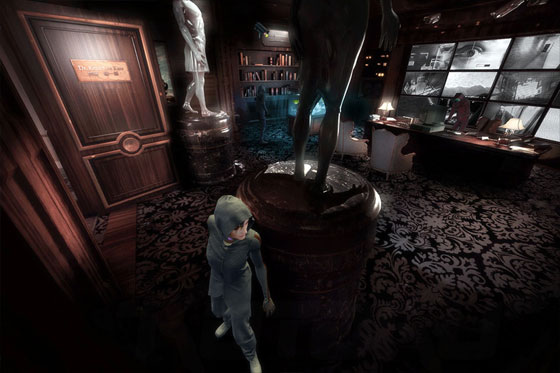 Before Camouflaj launched its crowd-funding effort, Payton says, it showed the République project video to game industry colleagues, some who had successfully funded their own projects through Kickstarter. Some urged Payton to raise République's goal above $500,000. He says he's glad he didn't.

Payton and Camouflaj did yield to one request from interested-but-not-invested parties. Halfway through the Kickstarter pledge drive, Camouflaj made an announcement that a version of the game would come to PC and Mac, not just iPhone and iPad. Payton says that a release for computers was always part of the developer's plan, but that "in order to keep the team's focus first on iOS," it had to put all other versions on the backburner.

"Once we launched our Kickstarter campaign, it was clear that something wasn't resonating with people," Payton recounts. "When we reached out to the community, their response was almost universally: 'You guys went to Kickstarter, a PC-centric space, and pitched them on an iOS game. No wonder you're underperforming!' We really took that feedback to heart and then returned to our PC/Mac design discussions. The surprising thing for us was that we got a lot of support for listening to the community and committing to PC/Mac, but it didn't translate into a lot of additional pledges.

"In fact, we STILL have more pledges for iOS than PC/Mac. It's things like that that make this a really interesting and challenging experience, because everybody is still trying to figure Kickstarter out."

The involvement of David Hayter and Jennifer Hale, announced late in the Kickstarter's lifecycle, was not a reaction to République's lukewarm reception and slow funding, Payton tells Polygon. According to him, it's been in the works since he left Kojima Productions, where he worked on Metal Gear Solid 4: Guns of the Patriots.

"With David, I actually worked with him on our initial concept video for République last summer, so he's been involved with the game for a while now," Payton explained. "Jennifer and I have a great working relationship, and I was just waiting until I had the perfect part for her. I would have liked to announce their involvement earlier in our Kickstarter campaign, but there was some logistical issues with getting them on camera. The response has been really positive. I know countless people just love to hear these talents perform. They're playing some great characters in République."

"I'm jealous of projects like Shadowrun that were almost instantly successful – I'm sure there was still stress involved, but [there's] also the relief of knowing that your game is going to be made."

Even if République doesn't meet its $500,000 goal – with 18 hours remaining when this story was published, the project had 8000-plus backers pledging more than $430,000 – Payton has contingency plans to make Camouflaj's first game a reality.

He says they've received interest from private investors and game publishers, options that come with more conditions than the Kickstarter-funded path.

"With a game of the budget that we have, it would be extremely difficult to make this game on our own terms if we were seeking [funding] from an outside party," Payton says, adding that Camouflaj is extremely eager to retain creative control and rights to the game's intellectual property – and whatever hair Payton still has left by week's end.

République: The Kickstarter that wouldn't stop