Guild Wars 2 on rifts, Waterworld and putting a nail in the coffin of quests

Another day, another bandit

Share All sharing options for: Guild Wars 2 on rifts, Waterworld and putting a nail in the coffin of quests

Walk down the road for long enough and you'll hear the dulcet tones of six guys lighting bales of hay on fire in a rural nook of Guild Wars 2. A loose-knit group of bandits is in the area, characters tell us under hushed breath. They come out of the woodwork to steal Moa birds from farmyards or to burn down the odd orphanage. Sometimes they'll appear suddenly in packs in the middle of a dale, a collection of wild yokel arsonists that can only be stopped by the firm hand of a few player vigilantes. It's 9:05 p.m. when we first notice them. One minute we're clearing out giant Wurms in the patchy outskirts of a dairy farm, then the next thing you know the Elementalist next to me puts down his staff and stares solemnly southward.

Another day, another bandit to kill, eh?

There, over that hill, not five seconds away - hell, you can cast from where you're standing. Bandits start funneling into the farmyard next to us and open-fire on the nearest spellcaster until he drops. "Third wave?" someone writes in chat. A few waves of them came through before but we only just arrived, and now darting between us like a bunch of stray dogs you'd almost think these bandits were happy to see us — if they weren't trying to kill us and light straw on fire.

You don't have to be trained in the dark arts of group combat to work out how to play with strangers in Guild Wars 2. "Groups happen," is how ArenaNet's bumper sticker would read. They form at random, when a collective of perfect strangers come together and begin fighting as one, sharing rewards across the board. ArenaNet's free-form approach to classes means the old holy trinity of tank, healer and DPS characters are blurred, moving into a grey territory where concepts like class archetypes and five-player groups aren't necessary. The game is fluid, in the way that the idea of a ranger resurrecting you mid-battle works against every fiber of a traditional, static class - or "profession" in ArenaNet's vernacular.

"I have played a healer-type class in every game I played," systems designer Jon Peters told Polygon, "from my first D&D cleric to a Guild Wars Monk to an Age of Conan Bear Shaman. When I started at ArenaNet, a few months before the original Guild Wars shipped, I wanted to make a game where you could still support your allies, but that didn't require them to rely on you. I can definitely say that it wasn't easy, but I feel like we accomplished that goal.

An alternative to questing

Dynamic content like the bandit raid is ArenaNet's alternative to questing. In more traditional games a user will enter a quest hub, usually a town or city where they can pick up tasks then journey outside to reach their goal in a specific area of the map. But when bandits attack a wandering NPC or a fighting horde of centaurs turn up at a nearby village, that's something else entirely. You can't plan for that. All you can do is stand together.

"We started talking about dynamic content before we heard about anyone else doing it," Peters explains. He says that the ArenaNet team played RIFT and Warhammer Online in earlier years, but the nugget of the idea was already there to start. "We were building a new expansion to the original Guild Wars, and wanted to create shared content so that players could work together without competing for rewards or XP, and change the world by doing so.

Dynamic Events, which happen suddenly and without warning, aren't new to the genre and neither is the idea of group alliances in combat. But maybe the intention behind them is, and perhaps so is the organic way these alliances form.

Global brand director Chris Lye argues the dynamic experience in Guild Wars 2 is unique compared to the likes of RIFT, a game that invites users to expunge demons who enter random points of the world through rift portals.

"I've played both [RIFT and Warhammer Online] and while participating in rifts and public quests, I couldn't shake the feeling that I was in constant competition with the other players to make sure I got my share of XP or pushed out enough DPS to make sure I got better rewards than them." 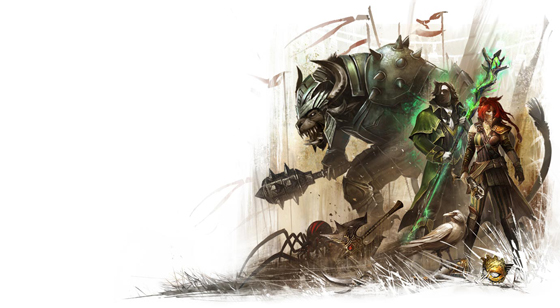 "In one particularly painful incident," he remembers of his days in RIFT, "high-level players came back to the starter areas and started one-shotting the rifts so I didn't even stand a chance. In Guild Wars 2 this just doesn't happen. Dynamic events play out the way you would expect an enemy encounter to play out in a fantasy world - everyone rallies together to help and you don't resent the addition of other players."

How things began in Waterworld

The appeal of social gaming was germinating in Peters as far back as the mid-'90s. He was attempting to develop a virtual playground for himself and his friends, with a simple graphical design and engine. It was influenced by old bulletin board system games from 20 years back and based on one of the worst films to date - Waterworld.

"It was the summer of 1995. I was a computer science student and it was a hot day. We were looking for something to do to get out of the sun and a few friends of mine and I decided to go to the movies. At the time Waterworld seemed like a good idea, but about 60 minutes into the movie my mind started to drift. Obviously not a great movie, but the world was compelling and something reminded me of the times I had played old BBS games back in high school.

"A friend of mine and I started to write a graphics rendering engine and built a few low poly boat models with the hopes of creating some sort of graphical online world based on Waterworld. A few months later rumors of Ultima Online started to surface and I began imagining my friends and I becoming small time bandits ambushing people on the road or on the high seas. Of course my imagination of Ultima Online was a bit larger than the game, but it got me started as I played through, Ultima Online, EverQuest, Dark Age of Camelot, World of Warcraft, Age of Conan, Warhammer, DC Universe Online, and a handful of other games over the next 10 or so years.

A free-form environment and a Dark Age

"That is what drove me to the genre, but the game that drove me to imagine that something greater was possible was Dark Age of Camelot. The frontiers of Dark Age created a place where despite a lot of constraints players could all work together in freeform environment. That concept more than anything is the influence, for myself at least, behind the shared cooperative environment in Guild Wars 2."

The difference between Guild Wars 2 and the dynamism of games that came before it is five-fold, according to Peters. It's a philosophy of scalability, consequences, rewards, chaining and exclusivity. 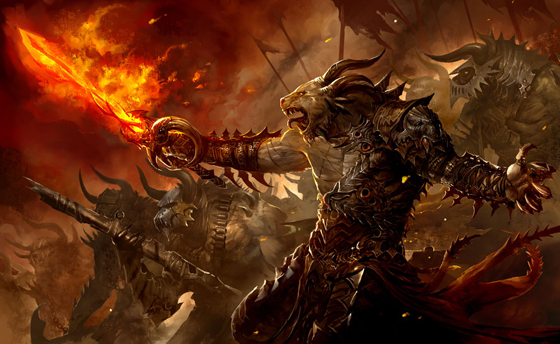 Content is scalable, which means events scale in difficulty to match the population of an area. The events have persistent consequences as well, he says, that sometimes can only be undone by actions taken in events following. Often they are tied together in chains, going on to generate different content that permeates the rest of the map. You're rewarded by participating in these things, not competing against one another, the idea being if you share the game space you should also be able to share the content. But more importantly the difference comes down to "exclusivity." If questing is the lifeblood of a massively multiplayer game then ArenaNet's full-blown transfusion is in the form of these events (or eventing, if there is such a term.)

Stepping away from tradition

"There is no traditional massively multiplayer content," Peters says, "which creates a need for players to care about and participate in them."

Some of these weren't there part of the design from the start. "Dynamic events did not scale in their early inception," is one example he uses.

"Lots of small elements have come and gone as we went through our iterative process. Combat used to have a camera lock-on. We used to have a sprint button that drained endurance. Skills used to cost energy.

"I could probably list hundreds of small changes like this, including some aspects of the game that have come full circle and are now very close to their original design after drifting far away from it for long periods. That being said, I have worked on a bunch of projects in my 13 or so years in the game industry. I have never worked on a game whose vision stayed as true to its original goal as Guild Wars 2 has."

United together in Tyria

But the social heart of Guild Wars 2 was always there. The idea that a video game disconnects you from your social world is now, perhaps more than ever, buried. And this is the most significant contribution Guild Wars 2 makes to the lineage of games in the genre.

It's 9:15 p.m. when the waves come to an end. As usual, not everyone made it out. One ranger was surrounded when he tried to throw a bucket of water over a flaming haystack - but it was over fast. Another told me about how he tried pathetically to throw dirt at one passing foe for a full 10 seconds in their downed state, a kind a limbo in between full health and waypoint resurrection where you can fight for survival using limited abilities. Perhaps the saddest story was that of the mage who didn't know all characters have a self-heal. Somewhere in between a cow and a plot of corn he was taken out in a spray of bullets. So it goes, friend. I resurrected him a few seconds later. I resurrected a few unlucky NPCs too. We were fine by the end of it, all of us.