A team of Soviet soldiers heads toward a small farm, cutting through tightly packed snow that runs waist high. Their movement is heavily compromised. As they come upon a unit of German soldiers, the Red Army takes cover behind trees, a truck, a fence. The Soviets attack, blasting a hole through a fence to open a lane into the farm. A small detail flanks the Nazis from the right. Combat engineers move to the front of the line, opening up a flamethrower and burning down the barn in which some of the Germans have taken cover.

The Germans flee the burning structure. The Russians pick them off, one by one.

These are the smaller, more tactical battles of Company of Heroes 2, Relic Entertainment's long awaited sequel to the critically hailed World War II real-time strategy game. The follow-up to 2006's Company of Heroes sends players to the Eastern Front, giving them command of the Soviet Red Army. Company of Heroes 2 brings with it technical advancements, like Relic's new Essence 3.0 engine and a new approach to "fog of war," but the 2013-due sequel plans to stick with what made the original a critical and commercial hit.

"We didn't want to do different, we wanted to do more," said Company of Heroes 2 producer Greg Wilson at an event in Los Angeles last week. That means "more authenticity, more realism" and "dynamic tactical battles" that focus more on strategic combat mechanics than strategy measured in actions per minute.

In a Company of Heroes game, players are forced to think smart, rather than with brute force measures. In other strategy games, a fleet of Marines can take down a massive spaceship with their rifles if they fire at it long enough. In Relic's game, taking down a tank requires a tank of one's own. A Nazi rifle won't penetrate the thick hide of a T-34. 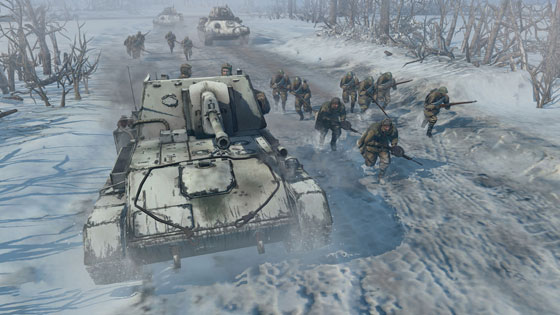 "One of the strengths about Company of Heroes is our attention to detail," producer Greg Wilson tells Polygon, "making sure we expose our players to a lot of different choices, basically give them the tools to make those choices. [With] Company of Heroes 2, we didn't want to change that feeling. We wanted players who played the original to feel familiarity with the game when they got into it and expose them to more tactical and strategic choices they can make.

"So when we built the game from the ground up for us it was about representing everything in the right way: Modeling armor from the front and the rear, making sure the sounds are right, that the movement of the tank and the firing and the muzzle flash and it all just adds to the sense of immersion the players get."

The goal with building COH2's tanks, Wilson adds, was to "make these vehicles feel like the 30 ton diesel snorting monsters that they were - to make them feel really imposing."

'You can't just take a bunch of engineers and send them at a tank, you have to make decisions that are accurate to counter what your opponent is doing on the field.'

One key innovation that Relic brings to Company of Heroes 2 is its approach to fog of war, the real-time strategy staple that obscures visibility of a battlefield map. Relic's TrueSight tech considers environmental factors, like buildings and trees, even smoke, to deliver new tactical considerations as players fight. TrueSight will obscure a player's line of sight through trees, behind structures and dynamically through mortar smoke bombs, letting your opponents toy with your view of the battlefield in new ways.

Combining TrueSight's organic fog of war tech with Company of Heroes 2's new cover mechanics, which lets units vault over cover and into battle, plus new Commander Abilities – including the option to call in airstrikes – Relic may have nailed its original vision of wanting to "do more." 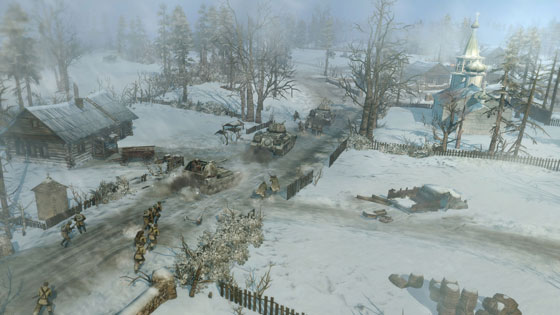 "We want to expose players to different styles of gameplay," Wilson says. "There’s no one single way you can play this game. You don’t always have to build in the same order. It’s always dynamic based on what your opponents and teammates are doing. You’re also dealing with a dynamic battlefield. Cover is created and destroyed, the game itself changes every time you play it and I think that’s one of the reasons the game’s so successful in terms of our user base on [the original] Company of Heroes."

Wilson says the team is not expressly looking to crack the eSports scene with Company of Heroes 2, but to deliver an entertaining real-time strategy game that builds upon the original and innovates with new technology.

"We're making games at the end of the day and we want things to be fun for people," he says. "We have an edited RTS experience, so for us it's not about chopping down trees or collecting gold or digging trenches and ditches [...] it's about what you do once the resources are acquired and you're able to build the things you want to build.

"We playtest everyday, and it boils down to what is fun for us is going to be fun for other people."

Tracey Lien contributed to this preview.