Share All sharing options for: Trion's Defiance ambitiously attempts to merge an MMO and TV show

In the highly competitive world of massively multiplayer online games, how can a new contender distinguish itself? Trion Worlds' Defiance attempts to stand out by merging a massive third-person shooter with an original television series set to air on SyFy, weaving the narrative of the action game and the sci-fi drama to form a shared universe.

Launching a new MMO into a crowded market, across three platforms and running a TV show is either impressively brave or totally crazy. And definitely a fascinating experiment to see play out.

Set 35 years in the future on a recently terraformed Earth, Defiance – the television show – explores the sci-fi drama of an alien-infested St. Louis as its inhabitants struggle to live side-by-side with their extraterrestrial neighbors. Defiance – the video game – focuses on a post-terraforming gold rush and the conflict between humans and unfriendly alien fauna inhabiting the greater San Francisco Bay Area.

While SyFy's Defiance deals with the interpersonal conflict of a bustling frontier boomtown (with aliens), Trion's Defiance is more about "shooting characters in the face," according to its creators.

Defiance is the culmination of four years of universe building between Trion Worlds, maker of online fantasy game Rift and publisher of online strategy game End of Nations, and SyFy, home to Battlestar Galactica. All involved plan to inject the weekly televised story beats of Defiance into the game's larger fiction, with the outcome of major battles and player-led choices having a similar influence on the show's major arcs.

The game and TV series will offer smaller, more subtle reinforcements, its creators say. Both will feature music from Bear McCreary composer of soundtracks for Battlestar Galactica, Dark Void and SOCOM 4. Characters from the game will pop up in the TV show, from time to time.

At an event in Los Angeles last week, Trion Worlds CEO Lars Buttler was not lacking in hyperbole in describing Defiance's ambitions.

Buttler, flanked by SyFy and Trion team members, described Defiance as "epic scripted drama meets massively multiplayer online gaming." He boasted it was "hyper exciting, incredibly bold" and "one of the most groundbreaking entertainment experiences ever created." He's a Trion founder and a believer in the massive project, so its easier to extend some forgiveness for his extensive enthusiasm.

Nicholas Beliaeff, senior VP of development at Trion, was more understated in his description of the MMO, promising "lots and lots and lots of guns" and "persistance where it makes sense," as well as weapon progression and deep character customization. 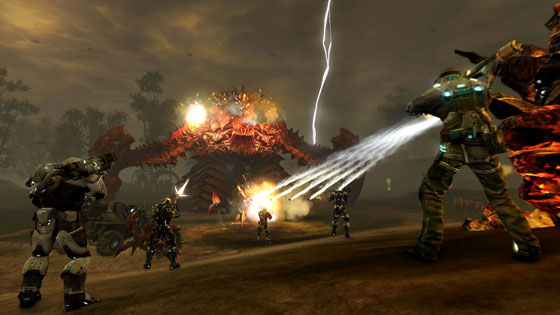 Playing through a ten minute chunk of Defiance on PlayStation 3 and PC last week – the game is also coming to the Xbox 360 – it's difficult to tell how the game's grand plans will play out a year from now. But those short sessions of Defiance gameplay did bode well for the MMO shooter's potential. Bouncing from world event to world event, form shooting crazed miners to 10-story bugs, each an easily digestible taste of team-based kill and loot fun, not unlike Gearbox Software's enjoyable Borderlands.

In Defiance's favor is how easy it was to feel comfortable with its mechanics. Buttons for reloading, grenade tossing and jumping are immediately where you'd expect them, if you've played a shooter over the past five years. The group-slaying of dozens of alien bugs with brightly colored exoskeletons was immediately familiar. The regenerating health system was too. At it's core, Defiance felt very much like a traditional console or PC shooter, expanded to a much larger scale; a game more comfortable feeling than groundbreaking.

"As we're applying MMO ideas towards the game, we're picking the appropriate things."

Trion's Bill Trost, lead designer on Defiance and original EverQuest developer, says the studio wanted to make an MMO that the team was focused on crafting a "fast twitch action shooter that relies more on player skill than any kind of dice rolling."

"In the beginning, we were not as much of a shooter as we are now," Trost told Polygon. "As the game developed and we saw how it was going, we really wanted to be true to that core shooter gameplay. You can't do really a shooter halfway. You have to be in or out, or it's not going to feel right. 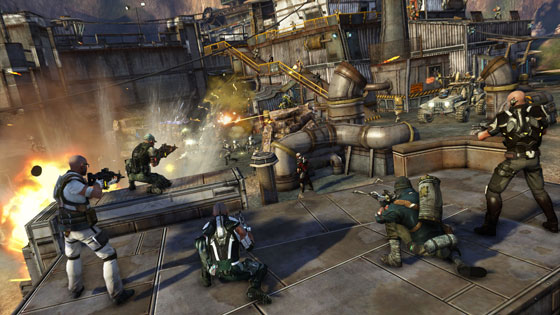 Trost explained that while Defiance's video game side leans to the action-shooter side, it will have its share of plot-driving story.

"We're definitely trying to leverage as much as we can about the nature of the world," he said. "While the game is 'about shooting characters in the face' primarily, we're also going to have a story that weaves throughout our initial launch content as well as the ongoing game."

The Defiance fiction will continue on week-to-week basis, Trost said, even when the show is off the air.

"What we want to do is narratively bridge the seasons," he said, taking those "big end-of-season hand-offs where players live in the world while the show is dark." Players, he says, are "the stars of the game" and will have some substantial impact on the evolving drama of the franchise.

"It's a huge challenge," he says. "We speak daily about how we're integrating these two things – especially now, as the pilot is close to complete. As far as their filming goes, we're heading into an intense series of discussions about how we map it out for the next season."

Trion is keeping some of Defiance's finer details secret as it prepares for an April 2013 launch on PC, PlayStation 3 and Xbox 360. Trost wouldn't tell us about character class plans, only saying that they're "not traditional," nor would he expound upon how we might pay for Defiance. Whether the MMO will be subscription based or supported by micro-transactions, Trion reps say they're "still evaluating business models" for the online game.