"I'd love to say enjoy the demo," says a THQ rep, introducing us to Metro: Last Light, sequel to bleak cult hit shooter Metro 2033, "but frankly I hope it gives you nightmares."

We'd just watched the harrowing live action short "Enter the Metro," establishing the post-nuclear apocalypse we're about to see in action. "Enter the Metro" introduced us, in a way, to Metro: Last Light's protagonist as an infant and offered a pre-nuked look at the places and people we were about to encounter in-game.

THQ's hands-off look at Metro: Last Light – played on a pre-alpha build of the game, we were told – opened in the dark tunnels of Moscow's underground, with a fellow survivor chatting incessantly at our silent protagonist. He seemed more chipper than a tunnel-dwelling apocalypse survivor might. Amidst his cheerful explanation of our mission, flashbacks of a pre-apocalyptic Moscow burst onto the screen: scenes of a subway train, the baby, an airplane packed with passengers.

After stocking up on the necessities – breathing masks, air filters and ammunition – the player and his partner leave the metro tunnels, blinded by their rare look at sunlight, and gaze out upon the burned city, plane wreckage in the distance. They take in the beautifully rendered destruction and vast desolation of Metro: Last Light's ruined Moscow. 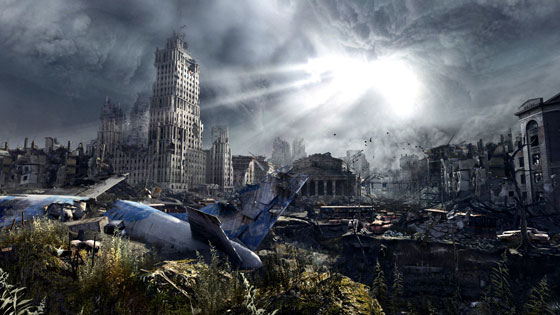 Last Light's protagonists begin heading toward that crashed plane to scavenge for supplies when the demo shows off its new weather effects. Lightning crashes, rain falls and the player's vision becomes obscured. He wipes away the snaking raindrops from his visor.

As the duo cut through tunnels, scavenging shotgun shells and looting air filters from corpses along the way, they're attacked by a mutated human, one of the game's irradiated horrors. Pinned to the ground, the player fends off the mutant with a decapitating shotgun blast. Another wipe of the visor, this one gorier. It's a brief explosion of action in the midst of quiet horror.

Above ground, a herd of mutated rats runs by. The player's partner recommends quiet.

We enter the plane carcass and see its seats filled with the skeletal remains of its passengers. The flashbacks the player experiences become overwhelming and we're transported to the flight just before the nuclear strike. Our view is moved to the plane's cockpit, behind the pilots. We watch as a mushroom cloud blossoms in the distance, the pilots shrieking in terror. Then we watch them burn alive before being jerked back to the present.

The demo transitions quickly from horror to action, as our protagonists begin their journey back to the metro and find themselves under siege from what appear to be massive mutant bats. The mutant rat pack returns and the survivors struggle to make their way into the tunnels, down the metro escalators shown in "Enter the Metro." Any semblance of ammo conservation is tossed away, as the pair, backs to the massive steel door that separates them from the tunnels, unload every round they have at the horde of nuked rats. From offscreen, a blast of flame burns through the mutants, the survivors are pulled into the metro tunnels, their savior – a heavily armored, flamethrower-bearing comrade – revealed.

Our brief, bleak peek at Metro: Last Light was a balance of first-person shooting action and moody survival horror, leaning a bit heavier on the action. But this was a vertical slice, like many controlled demos, likely intended to dazzle, despite the developer's aforementioned hopes for nightmares.

Speaking with THQ reps after the demonstration, Polygon was told that the publisher intends not to muck with developer 4A Games methods in creating the sequel to the beloved Metro 2033. Instead, THQ says it plans to better market and support Metro: Last Light, admitting that it didn't fully realize until it was too late what it had on its hands with the original.

Last Light, THQ promises, will be for the player who "mourn[s] the death of the FPS single player campaign," likening Metro's competitors to "a training mode or shooting gallery" compared to the demands of 4A Games' unforgiving shooter.

Metro: Last Light is scheduled for a first quarter 2013 release on PC, Xbox 360 and PlayStation 3, with a Wii U version also in the works.